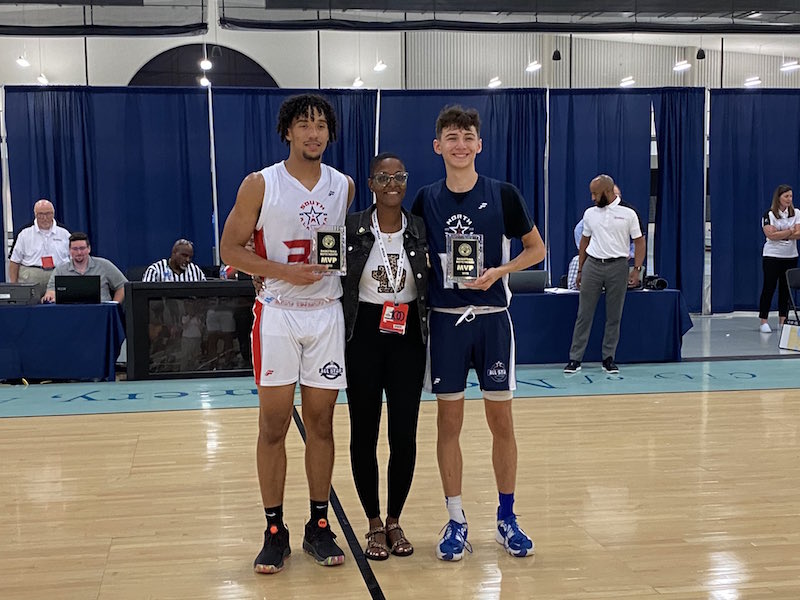 Chelsea’s Paul Lanzi was named the MVP of the North-South All-Star basketball game after totaling 15 points and leading the North team to a 10-point victory, while Spain Park’s Zach Gray also contributed in the win. (Contributed/AHSAA)

MONTGOMERY – Expected to be one of the top players in Shelby County during the 2022-2023 basketball season, Chelsea’s Paul Lanzi put himself in the running to be one of the state’s top seniors during this year’s North-South All-Star game.

Competing for the North team in the All-Star game in Montgomery on Tuesday, July 19, Lanzi not only put together a special night on the floor but was ultimately named the MVP for the North in a thrilling 101-91 victory.

In the game, the North was able to take an early advantage and built its lead up to 53-37 at the halftime break with Lanzi a big reason why. They then went on to fend off a late charge in the second half, including a thrilling 31-31 final quarter, to pick up the 10-point victory.

Lanzi’s game was on from the tip, as he made the most of his 16:11 of action on the floor. The rising senior for the Hornets went 4-for-9 from the field, including 4-for-7 from beyond the arc, while he added a 3-for-4 mark from the free throw line to total 15 points in his team’s win.

In addition to his scoring production, he finished the game with four rebounds, including an impressive three offensive rebounds, while he also added two steals and two assists with one turnover.

Lanzi was one of two county athletes to participate in the game, as Spain Park’s Zach Gray suited up alongside him for the North team.

Gray played 14:13 of the game and finished with two points, two blocks and one assist.

Heading into his senior season with the Jaguars, Gray will be looking to help lead the team back to the Final Four after a special run this past season.

During his junior season with the Hornets, he finished with an average of 17.4 points per game, which was third in the county, while he averaged four rebounds per game and two assists.

He was the leader of a young team offensively and made 78 3-pointers. He now has 862 career points and totaled 50 steals on the defensive end of the floor.

Gray also had a special season for Spain Park, finishing second on the team with 10.4 points per game, while he also averaged 2.8 rebounds and 1.3 assists per game.

Now, both will be looked at as leaders for their respective teams heading into the new season as All-Stars.