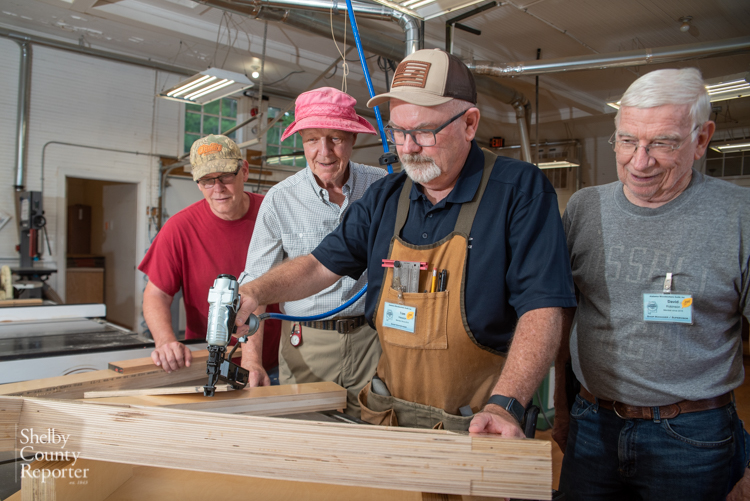 ALABASTER – The old Shelby County Schoolhouse off of Shelby County 17 in Maylene is home to a group of woodworkers known as the Alabama Woodworkers Guild who “make sawdust with a purpose.”

The Alabama Woodworkers Guild was first established in 1983 and moved to its present location in May 2008 when a grant allowed the guild to purchase equipment that would not regularly be found in a home shop.

“Membership in The Alabama Woodworking Guild is open to anyone with an interest in woodworking, even if they do not own any woodworking tools, have a home shop or possess any previous knowledge or training,” said Outreach Coordinator Sandy Sullivan.

One project the Alabama Woodworkers Guild is working with is the Purple Heart Project, a hand tool woodworking charity founded by Rob Cosman with the purpose of introducing physically or mentally-combat Wounded Warriors to the peace and joy of woodworking.

Cosman annually provides 36 Wounded Warriors with an all-expense paid scholarship to attend one of his Training the Hand Workshops. There are six workshops a year lasting six days and are held in Grand Bay, New Brunswick, Canada.

Each one is designed for Wounded Warriors who are still suffering from the effects of combat induced PTSD.

Sullivan said Cosman provides the training free of charge and sends the veterans home with lots of tools. A local group then builds them a workbench.

The Alabama Woodworkers Guild is currently participating in the project by making three workbenches for veterans living in Clarksville, Tennessee.

The workbenches will be constructed on July 14 at the Guild in Maylene.

Sullivan said the construction of the workbenches takes approximately 2-3 evenings to complete.

“They will be built of baltic birch,” Sullivan said. “The Guild has made numerous workbenches for use at the workshop; however, this is the first time the AWG has been asked to participate with the Purple Heart Project.”

Sullivan said the hand tool group will be doing the construction of the benches, but they will be using power tools to cut the lumber and drill the holes for assembly.

The procedure includes gluing and clamping several thicknesses of boards for the legs to provide strength and frame assembly, then mounting the work surface.

There are several specialty groups available when someone purchases a membership to the Guild.

For those who have no woodworking skills, the Guild offers classes in fundamental woodworking, mentorship with a skilled artisan and guest craftsman demonstrations and classes.

Membership to the Guild is $100 a year, and the Guild meets for its business sessions on the third Saturday of each month. A calendar on the group’s website provides times and details of various events happening at the schoolhouse throughout each week.

Sullivan said current membership in the Guild is around 300 individuals and families.

For more information about the Guild, or to learn about becoming a member, visit the website at Wp.awwg.info.