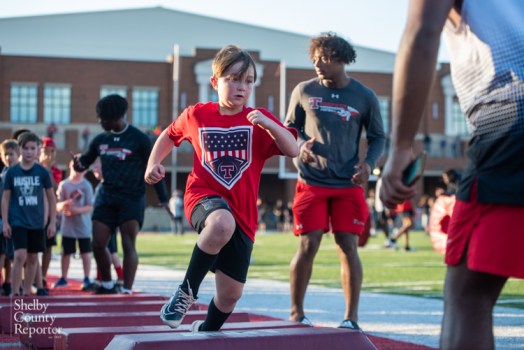 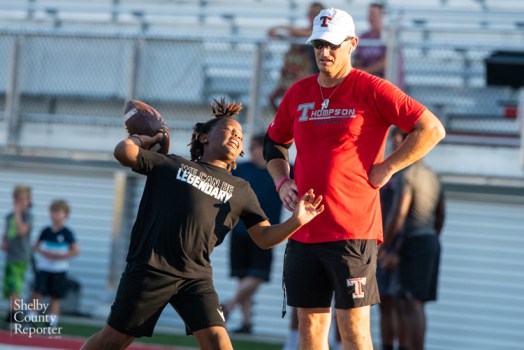 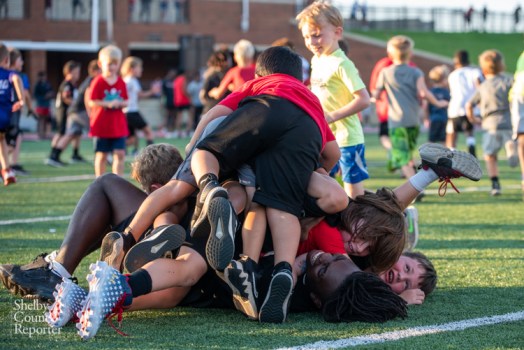 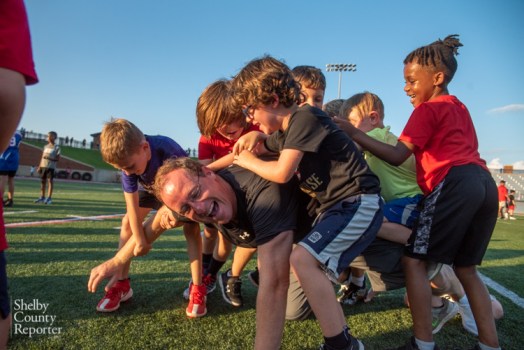 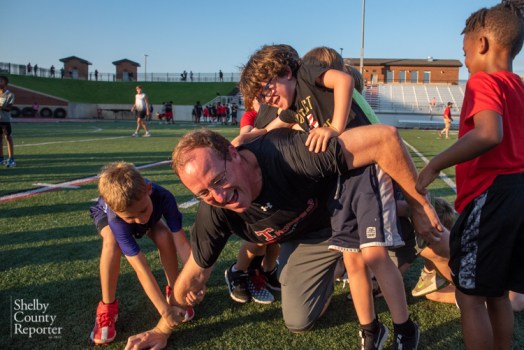 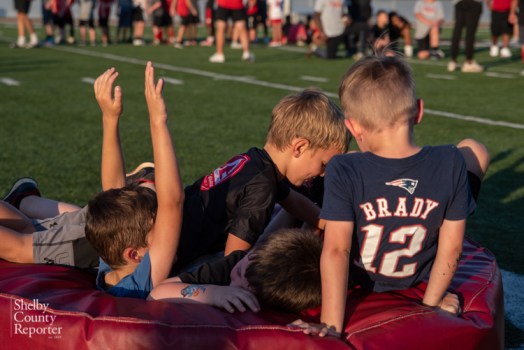 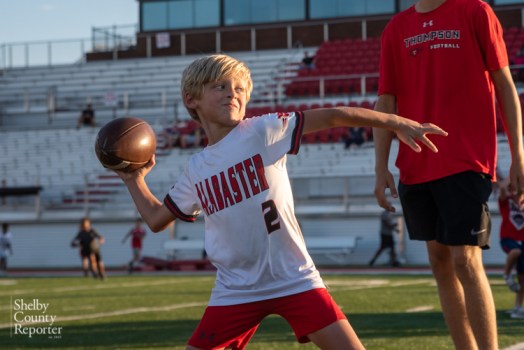 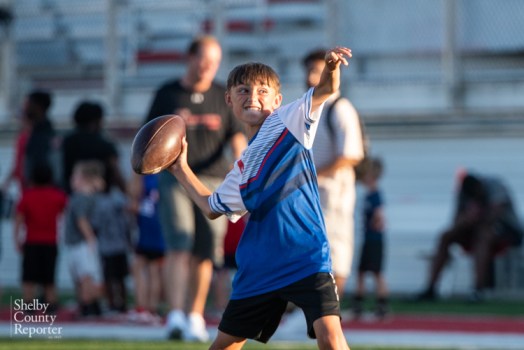 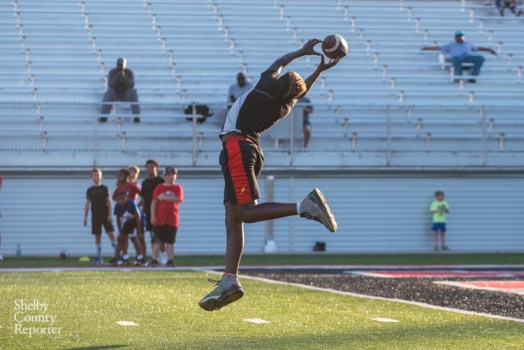 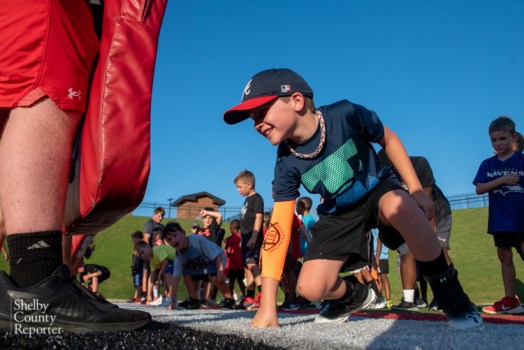 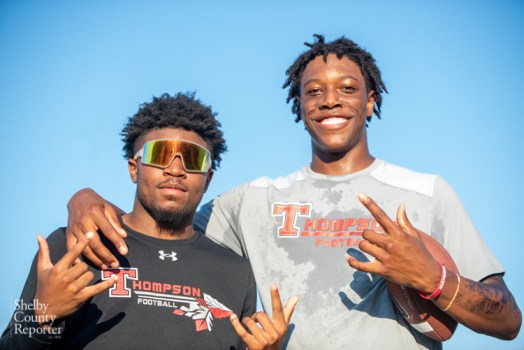 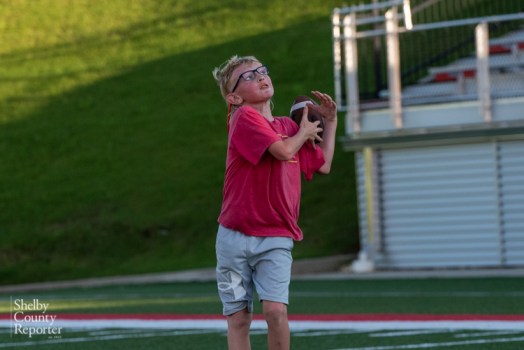 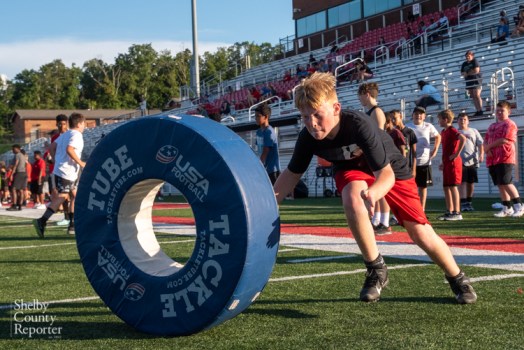 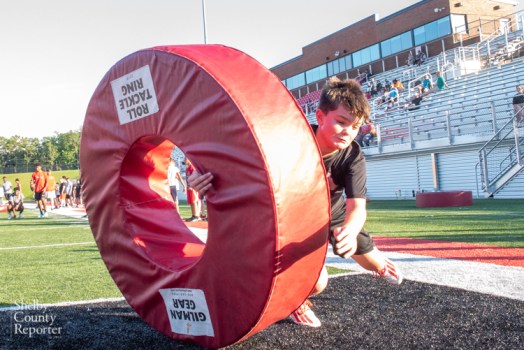 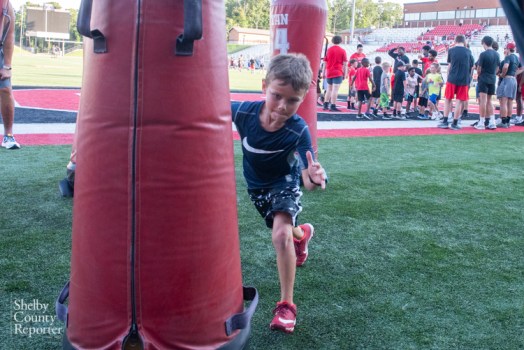 ALABASTER – With three consecutive state championships, the Thompson Warriors have quickly established themselves as one of the top programs in the country, but their focus hasn’t shifted.

While they may be the hunted instead of the hunter, the Warriors continue to use every day as an opportunity to continue building off the foundation that has been set, and on Monday, July 11, more than 200 young athletes got the opportunity to be a part of that at this year’s youth camp.

The camp featured close to 250 in attendance, and for a brief moment, the weight of trying to win a fourth consecutive state championship shifted off the shoulders of the players and coaches with their attention fully on creating a fun environment.

“Obviously, as a head coach, you want to feel like the young kids coming up in the community want to be part of that,” head coach Mark Freeman said. “You want them to have the vision of running on the field and wearing the jersey. I know as a young kid, I envisioned that. So it meant a lot that we had the kids here.”

It not only meant a lot to the players and coaches, but it gave those in attendance a chance to learn from some of the best athletes in the country in addition to a top coaching staff.

That, combined with the success of the last three years, led to a large turnout at this year’s camp, as enthusiasm continues to surround the program.

“The success has brought enthusiasm,” Freeman said. “This was the biggest attendance we’ve had. By far our largest turnout. It’s a blessing to know so many of our kids are involved in tackle football and youth football in general. You want that pipeline coming through lower level programs so that they know what to expect in high school and how we do things when they get here.”

He added that seeing that kind of passion around of the program is something he hopes becomes normal moving forward.

“You want it to be the norm,” Freeman said. “The expectations. It’s exciting from a head coaching standpoint. The enthusiasm and looking out there and seeing your kids out there on the field is a great, great situation.”

Throughout the night at Warrior Stadium, the campers in attendance got to put on their Warrior gear and take to the field to learn fundamentals and enjoy some light-hearted fun.

Freeman said the night filled with games, fun and lessons was enjoyable for all, but it was the interaction between his players and the campers that stood out.

“I enjoy seeing my players interact with the small guys,” he said. “A lot of them now were in the third grade when we got here, so they came through the youth camp, and now they’re leading it. It’s a great situation. They can say, “in no time, you’ll be here and wearing the jersey.”

Freeman also added that it allows his players to see a different perspective—the perspective he and his staff have for them.

“On my end, selfishly, it gives the kids a chance to see it from our end as coaches,” he said. “When you’re trying to get young people to do something and they don’t do it right, it becomes the process of how to get them there. Our players were such positive people to the kids and made sure they enjoyed the camp to show that football can be fun. The commitment is important, but you have to have fun doing it. I stressed to our kids to make sure to emphasize that. I was proud of how they handled it.”

With that, the camp allowed the players to gain a new perspective, the campers to see the fun in the game and the families involved to get familiar with the program and facilities.