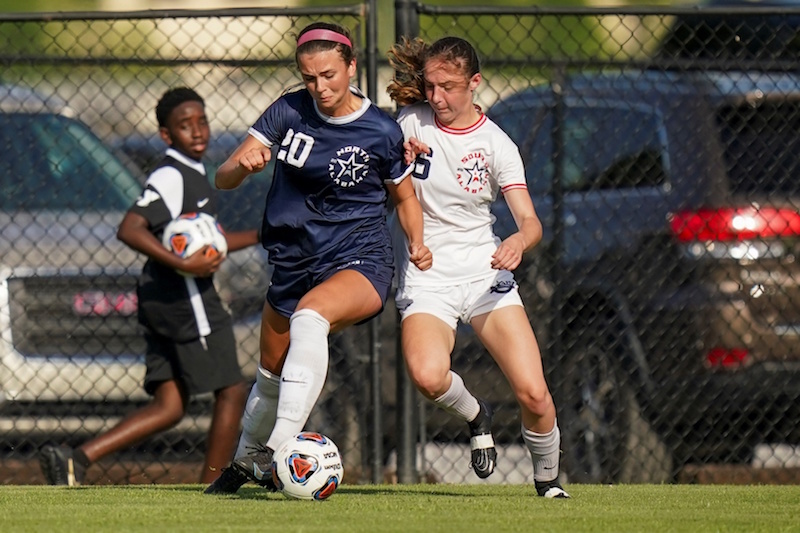 MONTGOMERY – The MVP award was a clean sweep on Wednesday night, July 20, as Shelby County was responsible for the top honor in both the boys and girls AHSAA North-South All-Star soccer games.

Oak Mountain’s Kierson McDonald was the reason for that possibility in the girls game. While Thompson’s Josh Owens made it happen in the boys game, McDonald took home the MVP award from the girls game after a special night that featured a game-high six shots on goal.

A defender for the Eagles, she was able to score on one of those six shots to help lead the North girls to a 5-0 shutout victory.

Almost as impressive as her offensive playmaking ability, however, was what she was able to do defensively as well.

Truly a player who can play at any position on the field, McDonald put together several impressive plays at every level to help earn the MVP honor.

This past season, she was considered one of the state’s best players, helping Oak Mountain maintain the No. 1 spot in the Class 7A rankings for the majority of the season.

She finished the season with 35 goals and 23 assists to lead the Eagles offensively throughout the year.

The other goal scorer for the North team was Thompson’s Georgia Cousins.

Cousins scored one goal on three shot attempts to help the team pick up the victory. She was another athlete similar to McDonald who played all over the field as a defensive goal scorer.

During her junior season with the Warriors, Cousins was not only Thompson’s leader on defense, but the four-year starter scored 10 goals and had 14 assists.

Beyond those two players, Spain Park’s Madie Davis and Briarwood’s Abigail Hoaglund both competed for the winning North team.

Davis took one shot on goal, while Hoaglund contributed throughout the winning effort.

Davis was one of several important players for Spain Park this season, as she scored five goals and had six assists to help lead the Jaguars to the state championship.

As for Hoagland, she had identical stats for the Lions, and is already committed to play college soccer at Mississippi State University.

Ultimately, the North team outshot the South team 24-8 in the victory.