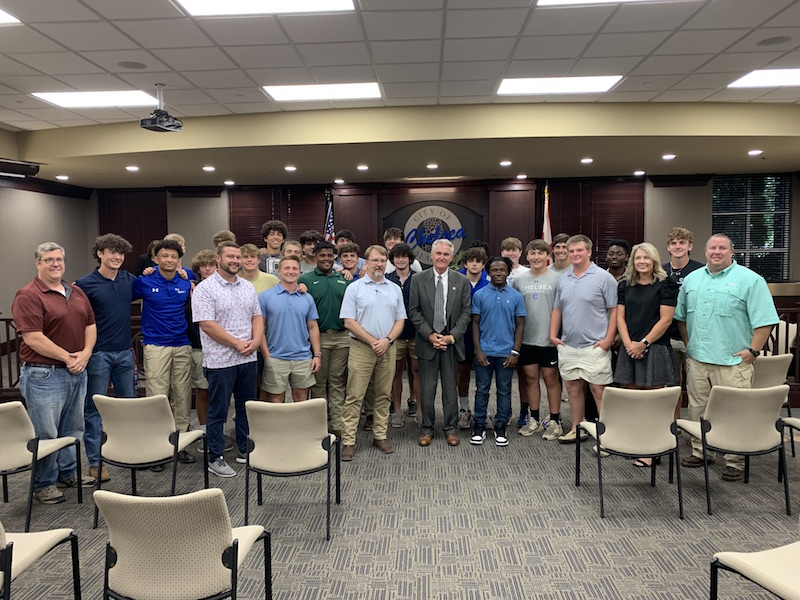 Members of the Chelsea High School football team and their coaches stand with the Chelsea City Council after the July 19 meeting, where the council voted to donate $190,000 to the CHHS football locker room renovation project. (Reporter Photo/Emily Sparacino)

CHELSEA – The Chelsea High School football team has moved one step closer to having a renovated locker room for the upcoming season.

On Tuesday, July 19, the Chelsea City Council voted unanimously to donate $190,000 to the school for a project to make much-needed updates inside the team’s locker room.

Applause from the team’s coaches, players and families filled the City Council Chambers following the vote, which came several weeks after Chelsea Quarterback Club President Mike Brooks shared the plans and asked for the city’s help with the project at a June City Council meeting.

City Councilman Casey Morris commended Brooks and others involved with the project for drafting plans and starting the fundraising process.

“I know it was a community effort,” Morris said. “I would never have thought this was going to be even approved tonight, I thought it would be something in the Nick Grant cycle, but I’m very thankful to this council and this community for taking the initiative of identifying an issue being the high school locker room.”

Mayor Tony Picklesimer said the original proposal was for the city to donate $177,620 to the project, but council members felt the additional funds would help to cover cost overruns and the creation of a head coach’s office inside the locker room.

“We’re proud of you guys and look forward to supporting you,” Picklesimer said. “We want you to have the best. This money will come from our education fund that we have from the 1-cent sales tax.”

Brooks said the locker room project was among many needs he and Todd Cassity, Chelsea’s new head football coach, identified for the program when they met after Cassity was hired.

“It doesn’t sound like much, but the locker room is really where these boys come together as a team and spend a lot of time in there,” Brooks said at the previous council meeting. “It just doesn’t have the feel, the space needed, the equipment needed in order to represent a truly 7A program.”

Chelsea moved up from Class 6A to Class 7A in all fall sports this year, making the push for improvements to the school’s athletic facilities even more pressing.

“Our weight room is top notch,” Cassity said. “It is one of the best weight rooms I’ve seen in high school football. Our other facilities are not. Our locker room would probably be on par with a 3A or 4A locker room, and we are now a 7A football team. We’re housing over 100 kids in that locker room that probably should be about a 40- or 50-capacity locker room.”

“For us as a council to be able to do this on the heels of the election, I think that speaks very loudly to our community that this council is united, and any bickering that is continuing on Facebook needs to stop,” Morris said in reference to Chelsea’s July 12 special election, in which a majority of the city’s residents voted against a property tax to fund a city school system. “Less than a week removed and we’re already partnering with the Board of Education to make a strong statement for our community and our leadership.”

In December, the council approved a memorandum of agreement with Shelby County and the city of Westover for a turf and competition track project at CHHS.

According to city leaders, the project is currently on schedule to be finished by the beginning of September.

In addition, the Shelby County Board of Education is also overseeing repairs at the CHHS football stadium press box.

“Tuesday’s vote wasn’t the beginning of us supporting our high school,” Picklesimer said. “We always have and we will continue to do so in any and every way we can.”