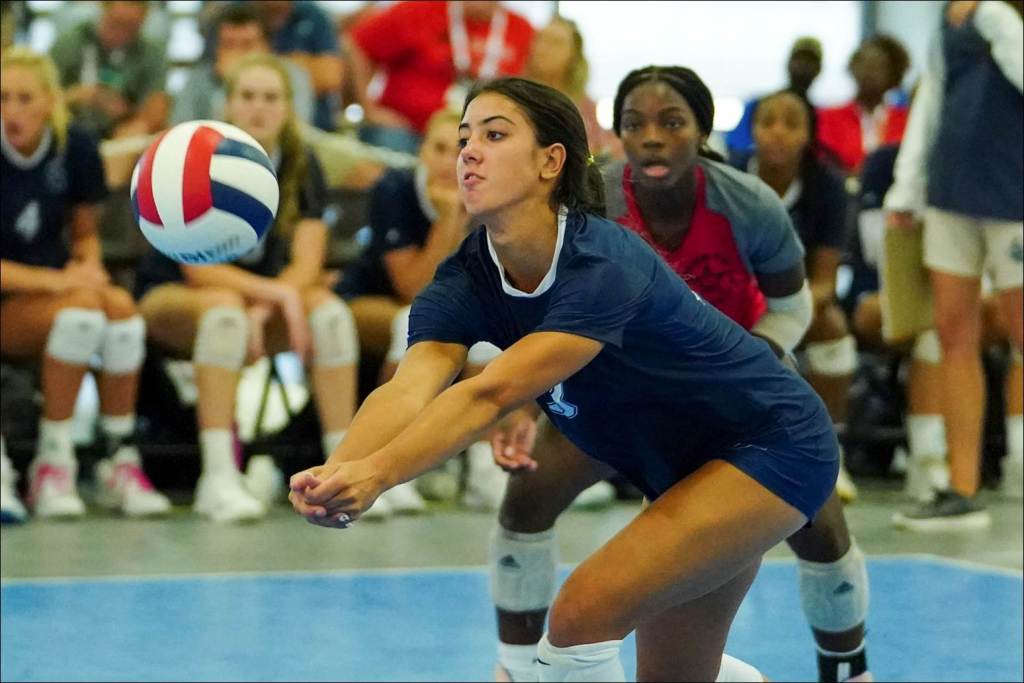 Spain Park’s Emily Breazeale competes in the AHSAA North-South All-Star volleyball game. She led the North team to a win and earned the MVP for her effort. (AHSAA Photo/Marvin Gentry)

MONTGOMERY – For those hoping Spain Park would be taking a step back heading into the 2022 volleyball season with the departure of team leader and Player of the Year Audrey Rothman, bad news, the Jags have already shown they’ll be a force following the 2022 North-South All-Star game.

During the thrilling night, Emily Breazeale put together a 14-kill night with 29 total attacks to lead the team and finish tied for a game high in kills, earning her the MVP honor for the winning team.

She also finished with 10 digs to lead the team and finish second in the game, while she had one ace in 19 service attempts.

During a junior season in which she helped lead Spain Park to the school’s first state championship, she finished with 484 kills for the Jags. She also led the team with 258 digs and added 61 blocks and 38 assists.

Breazeale was one of four local players from Shelby County to compete in the event with teammate Brooklyn Allison also joining her.

Beyond those two, Chelsea’s Emma Pohlmann was also on the North team, while Thompson’s Kailyn Grant helped the South team almost pull off the comeback win following the early 2-0 deficit.

Allison finished the game with four assists, one ace and nine digs, which tied for second on the team and third in the game.

Like Breazeale, she was important during Spain Park’s run to the championship thanks to 386 digs, 75 assists and 31 aces.

Pohlmann was also important in the North team’s win. She totaled six kills in 15 attacks, nine digs and one ace.

As for Grant, she was competing against the other county athletes for the South team. She didn’t get as much playing time, but she still was part of a team effort that narrowly led to a comeback win.

Grant was a team leader for Thompson this past season, helping lead the Warriors to the Final Four behind 322 kills, 87 blocks and 30 digs.

All four county players will soon enter the 2022 volleyball season as some of the best in the state and will all be fresh off All-County seasons as they look to help lead their teams on magical rides toward a state championship.