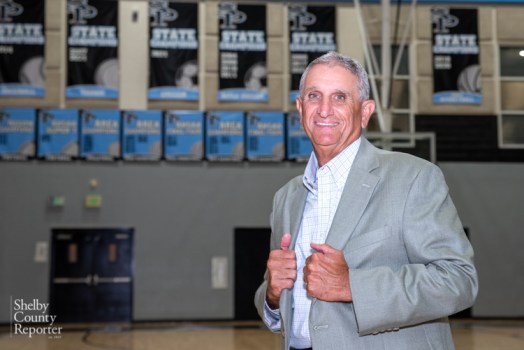 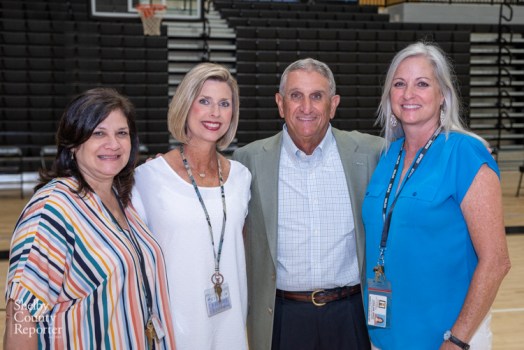 Larry Giangrosso, center, visits and pauses for pictures with his former secretaries at his retirement party at SPHS on Thursday, July 21. 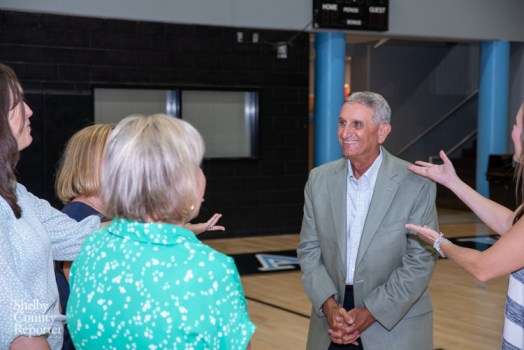 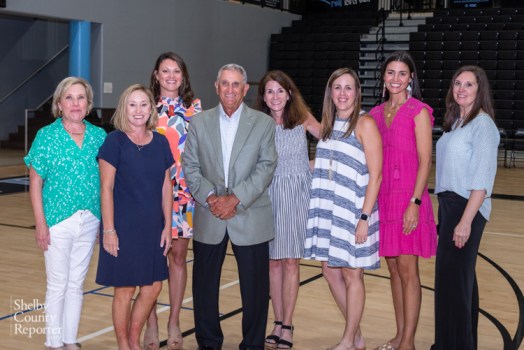 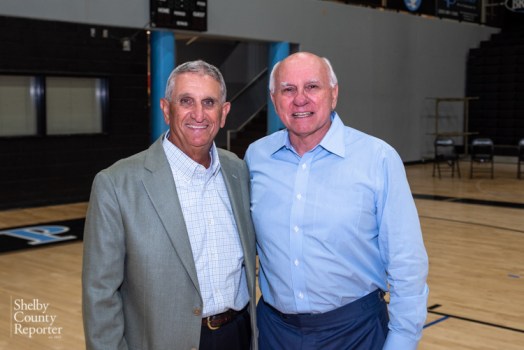 Larry Giangrosso, left, catches up with friend and former coaching partner Tony Honeycutt at his retirement party at SPHS on July 21. 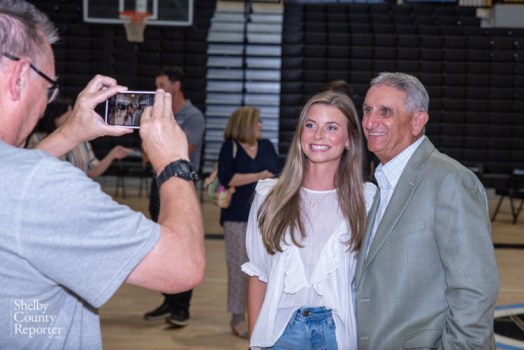 Larry Giangrosso pauses for a picture at his retirement party. 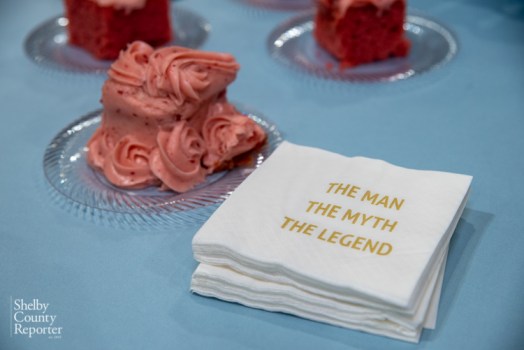 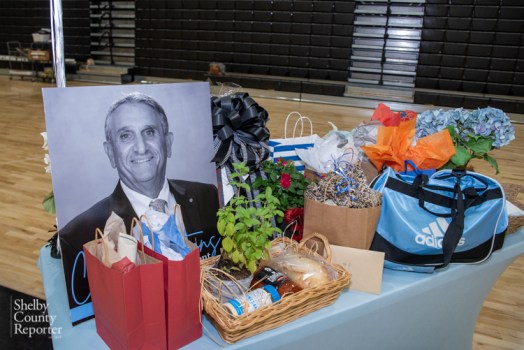 HOOVER – When Larry Giangrosso walked into Spain Park High School every morning for work, he adopted the mindset of someone trying to earn the chance to return the next day.

“I treated it like I was on a one-day contract,” said Giangrosso, who served as Spain Park’s principal for seven years before retiring this summer. “I knew that I had a task to do, things that needed to be done to the best of my ability. I took them one day at a time.”

With his self-imposed one-day contracts, Giangrosso said he reflected on the job he had done each day as he walked out of the school, and if he didn’t pass Hoover City Schools Superintendent Dr. Dee Fowler on his way out, he took it as a sign he had done enough to renew his contract for the next day.

“I showed up every day,” Giangrosso said, admitting he took little time off from work. “I did what they told me to do, and I tried to do it to the best of my ability and with a great attitude. It’s very simple: I believe in Hoover City Schools, and I believe that it’s a great place to educate kids. It’s something we can all be proud of.”

And even if he saw room for improvement in his own efforts, Giangrosso was always glad to return to a place where the employees and students were more like a big family than anything else.

“I love our students, faculty and staff,” Giangrosso said. “It’s about building relationships and letting your students and faculty know you care about them. I believe the best things that have happened in our schools over the years have been student-led and teacher-led.”

In his 47-year career in education, Giangrosso worked in different roles, including those of teacher, coach, assistant principal and principal.

Giangrosso credits the late Robert O. “Bob” Finley, a longtime coach at Hoover’s W.A. Berry High School, with hiring him for his first teaching job in 1975.

“I had some great mentors through the course of time, and it started with him,” Giangrosso said of Finley, who was Berry’s head football coach and athletic director when Giangrosso came on board as an English teacher and multi-sport coach. “I know he could have hired anybody, but I loved being on that staff. No one could have loved it more than I did.”

Berry was in the Jefferson County School System then, before Hoover City Schools was established as a separate school system in 1988.

Giangrosso left Berry in 1990 to accept the position of head baseball coach at Central Alabama Community College in Alexander City.

In 2012, Giangrosso returned to Hoover as an assistant principal at Spain Park, a role he held for three years until he became principal.

“I’ve never had a bad job,” he said. “I’ve loved every minute of being in education. I was always happy wherever I was.”

Giangrosso said he was grateful to have worked with three excellent superintendents and watch Hoover schools—and the city itself—develop and prosper over the years.

“The things that the city of Hoover and the Hoover Board of Education have accomplished over those years is amazing,” he said. “If there is any success that Spain Park has, it’s because of the students, faculty and staff and support we received from the school system and parents. I want them to know how much it means to me that they work so hard for our school and to make our school a better place.”

Above all, Giangrosso said he is proud of Spain Park’s students and employees for persevering through the challenging circumstances of the COVID-19 pandemic over the last two years.

“We went through some very difficult times,” he said. “We persevered, and we helped one another out. Our school is in a good place to get back to where we were, and even beyond.”

Giangrosso said he is also proud of Spain Park’s diversity and inclusion.

“This year, you will see the SGA and senior class officers are the most diverse ever in the history of our school,” he said. “What that says to me is that our minority students feel comfortable and have gained the camaraderie and the trust of the majority students because they put their name on the ballot and decided to run for office, and our students voted them in. Diversity makes us a better school. There’s just no substitute for that.”

Another positive aspect Giangrosso cited is Spain Park’s access to resources for students pursuing different paths after high school, whether they are going straight into the workforce with a skilled trade, enrolling in a two-year or four-year college or joining the military.

“Spain Park has always been considered a really wonderful school that prepares students no matter what they choose to do,” he said. “Students who come to Spain Park are going to get a good education that will prepare them for the next phase.”

Giangrosso emphasized the importance of educators not only focusing on helping students succeed academically, but also on improving their overall wellbeing.

“Test scores are important, but at the same time, we’re dealing with unprecedented mental health of our students and recovery from the pandemic,” he said. “I feel like we’ve made progress, but there is still a lot to do.”

As for his retirement plans, Giangrosso said he wants to spend more time with his wife, Karen, and their children and grandchildren.

He also plans to play more golf with his friends.

Even from the sidelines, however, Giangrosso said he will continue to root for everyone in his Spain Park family.

“I’m going to miss Spain Park, but I do know that there are a lot of good folks there that made my job a lot easier,” he said. “They are the reason Spain Park is the school that it is, and I love our students and this community. I want our students to know if we had any success, it’s because of them.”