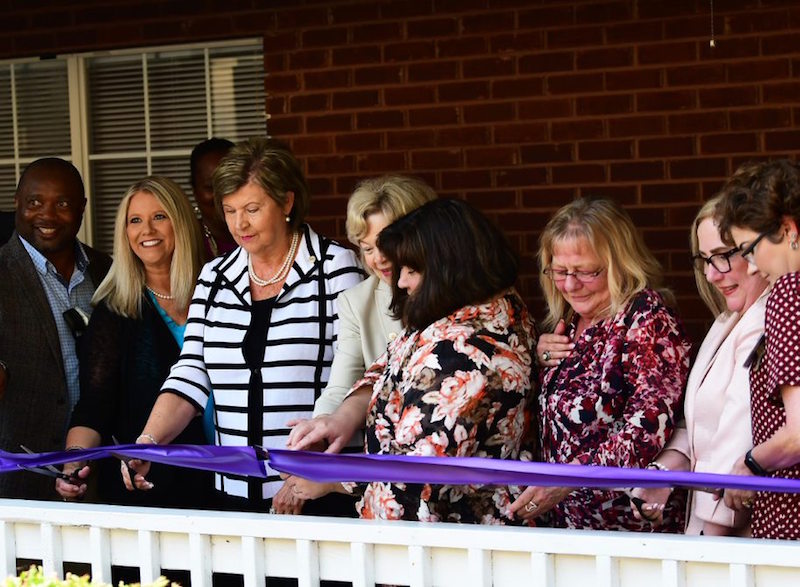 The Elder Justice Center of Alabama opened in Montevallo in June and provides a range of services for elderly residents. (Contributed/Jeremy Raines)

MONTEVALLO – Many Shelby County residents might be familiar with the Middle Alabama Area Agency on Aging, but the organization recently expanded its reach with more resources for the elderly.

This summer, M4A opened the Elder Justice Center of Alabama in Montevallo to provide services for older adults and their caregivers.

“The mission of the Elder Justice Center is to mobilize communities to prevent and properly respond to adult mistreatment so people can live with dignity, security and independence as they age,” Center Director Robyn James said. “The center serves all people who want to prevent adult mistreatment from occurring in their community. The center also places a special focus to provide direct support to victims of abuse, neglect and exploitation, those who are at the greatest risk of mistreatment and family caregivers.”

James said M4A created the Elder Justice Center of Alabama as one of its three Centers of Excellence under the M4A 4 ALL Foundation, a nonprofit whose mission is to support and advocate for the dignity of all people.

“The purpose of the Elder Justice Center is to help older individuals remain in their homes and in their communities so they can live independently and with purpose and dignity,” said Carolyn Fortner, executive director of M4A and 4 ALL Foundation.

The Elder Justice Center of Alabama is designed to support adults age 60 and above, along with their caregivers, she said.

“It’s not just to serve those who have been unfortunately victimized,” James said. “The spirit of the center is to prevent the neglect, exploitation or abuse from happening in the first place. We have evidence-based tools, training, education and resources to help them through their caregiver journey.”

“As a society, we do a lot to prepare people to become parents of children, but little to prepare children to care for parents as they age,” James said. “We will work towards one common goal: to help prepare families to provide care so our older residents can remain safe, independent and unharmed as they age.”

According to James, the center will serve as a blueprint for other states interested in opening similar facilities.

“We know that there are only about 16 or 17 of these shelters solely for elder adults in the whole nation, and now that I have told our fellow Southern states about it, I have a lot of Southern states who want to visit Shelby County, and this center, so they can learn how to get their dream off the ground,” said Jean Brown, commissioner of the Alabama Department of Senior Services. “I commend all of our partners at M4A for their passion and leadership in bringing this dream to fruition.”

Retired Montgomery Police Department Lt. Steve Searcy said an elder abuse section has been established in the Family Justice Center in Montgomery, too.

“Services to be offered at the center include serving as Alabama’s Elder Justice Resource Center and an official Elder Justice Training Center for professionals and the public supportive services for victims and family caregivers, and an adult day health center and eventually a temporary emergency elder shelter,” Searcy said.

The Elder Justice Center of Alabama is collaborating with the UAB School of Nursing to open its Adult Day Health Center in August.

Following the Adult Day Health Center’s grand opening on Tuesday, Aug. 16, the center will be open on Tuesdays and Thursdays from 8:30 a.m. to 4:30 p.m. at the Elder Justice Center of Alabama.

People can come to the Adult Day Health Center for either a half-day or a full day.

“The importance of an adult day program is significant to prevent abuse because the caregiver gets a break,” James said. “Two nurse practitioners will oversee clinical services at the Adult Day Health Center. Just being socially active here is huge.”

“Research shows that for every one case reported for elder abuse, there are 23 more that are never reported,” Alabama Department of Human Resources Commissioner Nancy Buckner said. “The good news is that Alabama is taking a strong stand to prevent and address the issue of elder abuse through the services offered at the new Elder Justice Center.”

“Once this center is fully operational, law enforcement and social services personnel will have the resources necessary to protect this vulnerable population,” Baker said.

James said the building is fully paid for because of a $1 million grant from Gov. Kay Ivey and state legislators, and she also recognized local organizations that have partnered with M4A on the project, including Shelby County Department of Human Resources and Elder Justice Alliance of Shelby County.