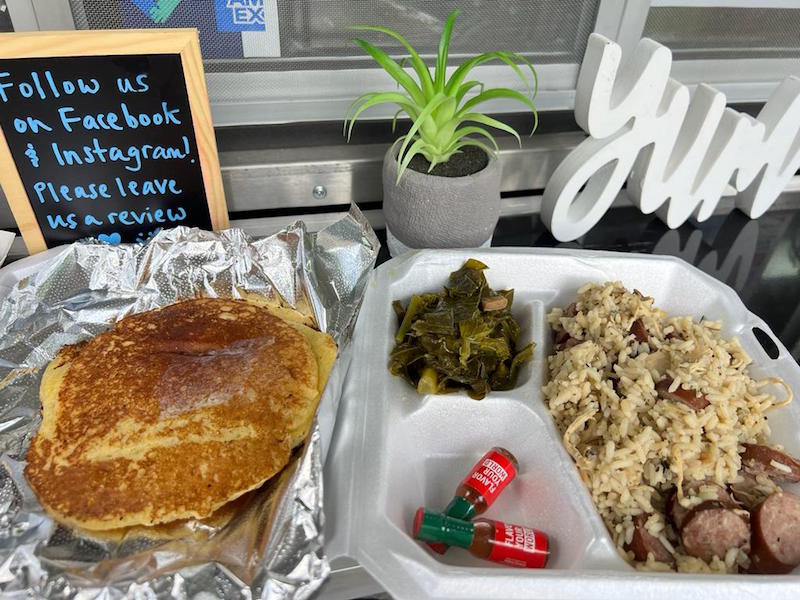 CALERA—If someone offered you a serving of chicken bog, your mouth might not water at the first thought of the dish in question. Michelle Fleming hopes to change that.

“The Low Country is boggy and marshy,” explains the South Carolina native. “It’s called chicken bog because the chicken and the sauce are bogged down into the rice. It’s rice, chicken and all-beef sausage, herbs and spices, but it’s not spicy.”

Fleming, owner of food truck The Boss Bogg and More LLC, was born and raised in North Myrtle Beach, South Carolina, where she spent most of her life until moving to Alabama about three years ago. Chicken bog is among the most popular dishes she serves, and the dish is her tribute to Anudria Price, with whom Fleming worked at the House of Blues in her hometown.

“Chicken bog is a very popular dish in the Low Country,” Fleming says. “In a matter of speaking, you could call it South Carolina’s version of jambalaya.”

She goes on to detail how the dish is served with two buttermilk cornbread pancakes, homemade collards in honor of Anudria, and Tabasco sauce on the side.

“Some people like to spice it up and some people don’t,” Fleming says.

The Boss Bogg got its start at Sage Bar & Grill in Calera, where Fleming cooked for owner Katie Troncale on and off for about six months. When she pitched the idea for a food truck to Troncale, everything seemed to fall into place for both entrepreneurs.

The Boss Bogg and More first opened for business on Jan. 23, 2022, and currently operates in Calera, Alabaster and Montevallo. The name comes from a combination of chicken bog (note the added extra ‘g’) and Fleming’s Old English Bulldog, ‘The Boss,’ who has become the face of the food truck.

“It worked out very well for both of us,” Fleming said of Troncale. “When she first opened, I helped her with a great deal of her recipes. We both are two women in a really tough business, and we kind of saw that in each other. Katie is a little younger, but man I respect her tenacity and her will. She literally dreamed up the concept of Sage and she is doing it.”

Fleming operates the food truck with her significant other, Derek Richter, as well as her two daughters, Hannah and Haily. She credits Richter with helping her to dream up the idea, which they did together at his father’s house over several evenings.

Everything on the menu is a tribute to someone who helped Fleming along the way, going back to her childhood in North Myrtle Beach when she was her mother’s “right hand,” being the only daughter among five children.

“It was me and my mother in the kitchen and sometimes my father too,” she says, adding, “Everything on my menu I have learned from someone else throughout my years just being taught different things, whether it was my mother, my father, coworkers or my bosses. I don’t take any of the credit.”

Items that pay tribute to her parents include Mom’s Meatloaf and Daddy’s Cole Slaw, the latter of which is served with the Little River Fish or Fried Shrimp Plate.

Another popular menu item is the Bacon Mac & Cheese Burger, a double stack with fresh ground chuck, cheddar cheese, bacon and topped with homemade mac and cheese and Boss Sauce, which is described as “kind of like a barbecue but not really a barbecue.”

“Everything I do is homemade, nothing from a can or a box, and I think people can taste it,” Fleming says.