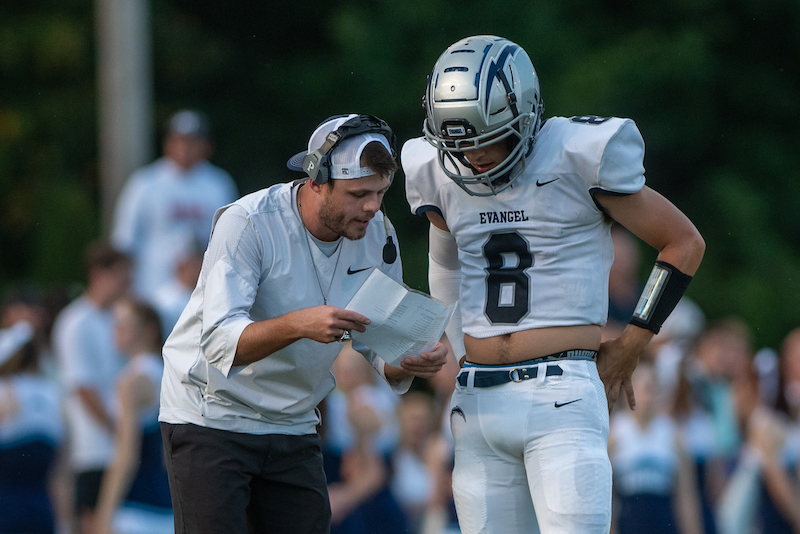 The Evangel Lightning have high expectations as usual heading into the 2022 football season, including a state and national championship. (File)

ALABASTER – Determined to continue a national 8-man powerhouse going into the 2022 football season, the Evangel Lightning have plenty of motivation.

Not only are they looking to bring home a fifth straight NHSA 8-man National Championship this season, but the Lightning have fallen short of winning the state title in the ACSC the last two years.

This season, however, they have a goal of redemption against rival Ezekiel to reclaim their spot atop the state, while also hoping for another national title.

Head coach Tim Smith is heading into his sixth year at the helm, and he knows in order to accomplish both, he’ll have to have his team ready to roll early in the season.

Luckily for him and the Lightning, several key players are returning this season that should make Evangel the frontrunner once again.

One of the biggest bright spots on the team is senior quarterback Eli Whitfield.

Fresh off a 2,551-yard season with 35 touchdowns, he is returning to the starting position for his final season with the Lightning. A true pocket passer, he will be the engine that makes this year’s offense go.

That gives this offense a lot of potential considering the athletes who will surround him.

At running back, Hunter Atkins will also return after totaling 1,223 yards and 17 touchdowns during the 2021 season.

Even bigger and stronger this season, that forces defenses to be prepared to stop both the pass and the run, especially with Colton Dorough bringing more experience back to the position.

They’ll also get top target Judah Thompson back for his senior season at receiver.

Last year, he led the team with 745 receiving yards on 54 receptions. He has the bet hands on the team, while twins Kyle and Caden Jones are two more seniors who will return. Kyle was the second-leading receiver a season ago with 412 yards on 23 catches.

All of those players will have the protection of a deep offensive line, especially in 8-man football. Starters Carson Donovan and Elijah Henderson are both back this season, while Ethan Stallings, Baylor Parker and Hudson McCrakcen will all be key. The line could also see the help of Reid Castleberry and Nick Cloud, making it the deepest the position has been in years.

Defensively, many of those same linemen will play up front on the defensive line with Cloud and Henderson likely leading the way. Two starters will be gone from the defensive end position, however, which is where Cole Romano and Grady Watkins come into play. Those two juniors should step in to fill important roles on the edge.

Linebacker and secondary will be the two key positions needing to replace talent on this year’s team.

At linebacker, however, Evangel will get back leading tackler Kaden Jones, who totaled 94 tackles and 16 tackles for loss a season ago. The position will also feature Hayden Black, who was the leader in the secondary last year with 50 tackles and 6.5 tackles for loss.

Shace Green will also be key, while several others will need to step up quickly to fill gaps.

In the secondary, Judah and Zion Thompson will both return some experience, but the team is still working to find the right athletes at the position.

Evangel will get a boost from special teams this season thanks to the return of kicker Lucas Mast, who was 42-50 on kicks last year.

Prediction (10-1): There are no 11-man games on the schedule for Evangel this season, which should spell success. They already had a handle on 8-man competition and were successful against 11-man opponents, but now, the Lightning get to focus fully on reclaiming the ACSC State Championship and remaining one of the country’s top high school 8-man football teams. The only concerns come on defense, especially on the back end, but the Lightning have a ton of athletes and will find the right fit there. Having confidence in that, it’s tough to see this team not being successful this season with the return of so much on the offensive side of the football. Expect them to put together a special year of football that gives them a shot at both championships.