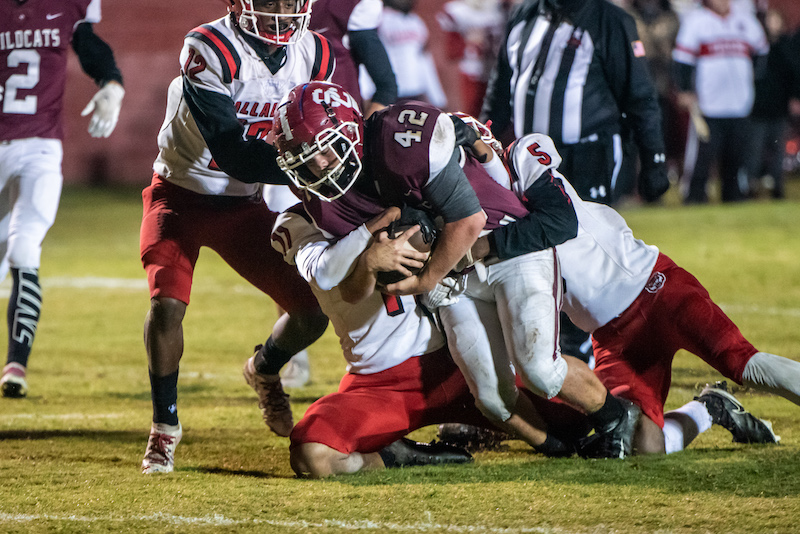 Heading into year two under Zeb Ellison, the Shelby County Wildcats will have concerns at a few positions, but they also return several stars who could help make this a special season. (File)

COLUMBIANA – With back-to-back playoff appearances, the Shelby County Wildcats have wiped away the 11-year postseason drought that plagued them for so long.

Now, there is confidence in the program and belief that reaching the playoffs isn’t a long shot, but instead an expectation.

That anticipation grows even more with it being the second year for the Wildcats under alum Zeb Ellison, who stepped in and led Shelby County to a two seed and home-field advantage in the 2022 playoffs.

This year’s team will have talent to replace, but some of the team’s most physical playmakers return, and the schedule features several winnable games.

To reach their full potential, however, the Wildcats will have to have some new faces step up, and quarterback is one of the most important positions to replace.

Gone is Connor Aderholt, who had a grasp on the offense last year.

This season, they have a good problem, which is multiple capable starters, who are all pushing one another for the starting job early in fall practice.

Jackson Griffith, Carter Sheehan and Ryan Sipes are all competing to earn the job, and each has qualities that can make a difference.

Griffith was last year’s backup and knows the offense well, while Sheehan is also a star on the baseball team and brings an athletic presence to the position as a runner or thrower.

Whoever wins the job will get the benefit of having several key players back on this year’s offense, starting at the running back position.

Bradley Horton was a physical leader at the position a season ago, setting the tone for the entire offense to flow, and now he returns to do the same in 2022. Depth, however, will be the best part about the position this season with Jeremiah McCarter adding a similar back to Horton and Devin Alexander bringing to the table an entertaining young player with speed.

Receiver will also return talent this season thanks to Noah Reed and Connor Rigney both bringing back starting experience. Reed has some of the most trustworthy hands on the team and is a leader, while Rigney is expected to take a step forward as well.

In addition to those two, Cade Joiner and Austin Wilson are two other premier athletes on the team who will likely play a role.

The concern offensively will come up front.

The offensive line has to replace four starters this season, which is a tall task at any level of football.

Tanner Stogner, however, will return as a starter. His experience as a 6-foot-3, 285-pound lineman who also wrestles will be the driving force for others to make a difference as newcomers to the starting lineup.

Those other four positions, though, are still very much up in the air.

That concern will also be replicated on the defensive line, as that unit will be replacing every starter heading into the season.

With the trenches being what usually makes the difference in a football game, that makes finding the right mix an immediate priority.

Wilson and JT Beasley are two defensive ends who will lead up front as seniors, but beyond that, they’ll have to fill other key positions.

The back end of the defense, however, will be extremely strong, starting with a good group of linebackers.

Horton will return as the team leader at that position as well, while McCarter, Cooper Pennington and Conner Rogers are all exciting players who return experience at a deep position as well.

Backing up that group will be a strong secondary unit featuring returning starters Micah Swain and Coby Moore. Both played in every game at corner last season, while Joiner, Greg Brasher and Alex Goodwin will rotate in at safety and corner as well.

The Wildcats will also get a boost from returning kicker Tommy Grigsby, who not only started last year but hit several clutch kicks in tight games to help propel the team to victory. He’ll handle all placekicking, while TJ Milton is a sophomore who could come in at punter.

Prediction (6-4): The potential is there for this year’s Shelby County team to be the best in a while, even after last year’s runner-up finish in the region. The Wildcats should be able to compete in just about every game, while there are three that are toss ups that could go either way. The success will largely depend on success up front on both sides of the ball, depth and quarterback play. The defense is going to be physical, which is a tone that was set in Zeb Ellison’s first year as head coach last year, while the offense will need to show what is possible early in the season. Expect Shelby County to take a leap in year two under Ellison with a better understanding of the playbook and what is needed to be successful.