Prediction: Special season ahead for Vincent in 2022 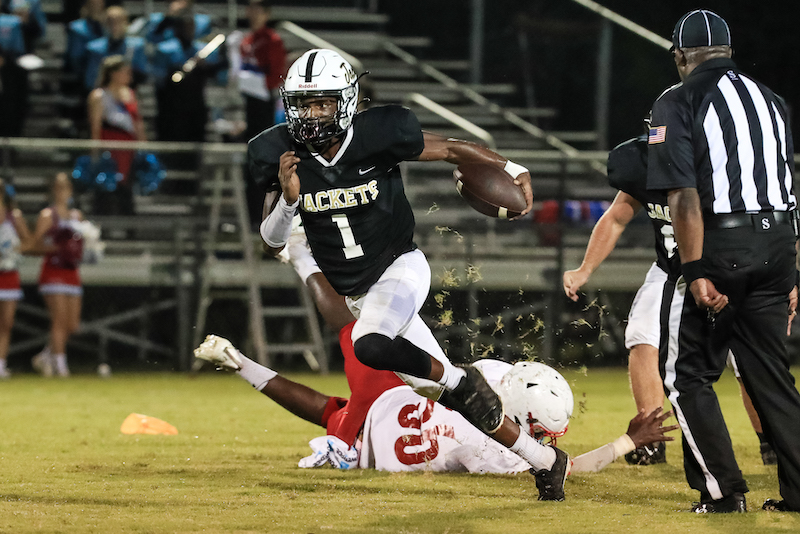 Optimism is surrounding the Vincent Yellow Jackets heading into the 2022 season fresh off their first winning season since 2013 last year with the majority of the team’s talent returning. (File)

VINCENT – The expectations are as high as they have been in quite some time at Vincent ahead of the 2022 football season and for good reason.

The Yellow Jackets will return the majority of their starting talent from last year’s team, which put together the team’s first winning season at 6-4 since 2013. That recorded included a one-point loss as well.

Now, they’ll have key players back at each position, which has the coaching staff excited and the players believing.

There is still plenty to prove on the field for a team that hasn’t made the postseason since 2018, but the growth in excitement is there heading into year five under head coach Lucas Weatherford.

One reason for the enthusiasm heading into the season is the return of starting quarterback Blake Allums.

Not only did he start last year and throw for 1,105 yards with 17 total touchdowns, but he also played in several games as a sophomore. Now, he’s a senior and has full command of the offense, which has helped his confidence grow and has allowed the coaches to put more on him.

That starting experience at possibly the most key position on the field to have experience will be big, but the return of Tray Youngblood won’t hurt either.

The athletic presence can play any skill position on the field. Last season, he totaled 443 receiving yards and 360 rushing yards, while he is also a threat in different formations at quarterback.

Expect the Yellow Jackets to capitalize on his presence no matter where he is on the field.

His primary position on offense will be receiver, which gives the Jackets a dynamic one-two punch, as the coaches expect Zac Carlisle to have a breakout season this year after totaling 441 receiving yards and four touchdowns last year on just 19 receptions.

With an experienced quarterback and those two athletic receivers, the passing game should get a big boost this season, while Aiden Poe, Ray Albright, Nolan Kratz and Mattson Davis will also help.

The lone spot on offense that will take a hit this season is the running back position.

Jermarey Lawson has graduated and with that goes 1,409 rushing yards, 122 receiving yards and 19 total touchdowns from last year’s team.

Those will be big shoes to fill, but Vincent has handled running back departures well with a next-man-up mentality, and this year, Zack Wright will be the one expected to step up.

Standing at 6-foot-1, 215 pounds, he is another powerful runner who will take on a leading role this season, while Youngblood and freshman Jayden Roberts are two others to look for at the position.

What will help the running backs, and the entire offense for that matter, is the return of a deep and experienced offensive line.

Four linemen return starting experience this season, while two others got extensive playing time a season ago. Easton Fields, Grayson Gulde, Jacob Carter, Ethan McElwrath, Ty’Qun Goodman and Aaron Kirk will all be back to fill an impressive line, while there are four others the coaches feel confident in as well, which gives this year’s team the most depth of any in years in the trenches.

Most of those players will flip sides and play up front defensively as well with Fields and McElwrath being the leaders. Last season, those two combined for more than 80 tackles and 25 tackles for loss. They’ll be the leaders of the defense up front this season, while that same depth seen on the offensive line will help keep players fresh on both sides.

One of the biggest returns to this year’s defense will be Wright, who will be playing on both sides of the ball.

Last year, he was the team’s leading tackler with more than 100 total tackles and 11 tackles for loss. He also totaled five sacks, two interceptions and two forced fumbles and will be a leader again this season. He’ll be joined by Gulde, Aiden Gasaway, Kirk, Albright and Roberts. That group will rotate throughout the front seven.

In the secondary, you’ll also see familiar faces this season with Youngblood and Carlisle both playing on both sides, while Kratz will be a leader at corner.

That is the only area of concern from a depth standpoint this season, as Weatherford hopes to avoid having to put Allums back there to prevent any risk of injury to the starting quarterback.

Improvements will need to be made on special teams from a consistency standpoint, but Goodman will return to handle all place-kicking duties in 2022, while Poe or Allums will be able to punt the ball.

Prediction (7-3): Vincent hasn’t won seven games since Zeb Ellison led the Yellow Jackets to a 7-4 season in 2012, one year after going 9-3. In fact, last year was the team’s first winning season since going 6-4 in 2013. So seven wins going into this season may seem like a reach to some, but this year’s team has more returning talent than any other Vincent team in recent years, and definitely more than last year’s 6-4 team. With a talented starting quarterback returning, the two best athletes at receiver and defensive back returning, several offensive and defensive linemen back and many other contributors, the Jackets are in great shape. They’ll also combine that with a manageable schedule that should see them not only compete for a playoff spot but possibly home-field advantage.