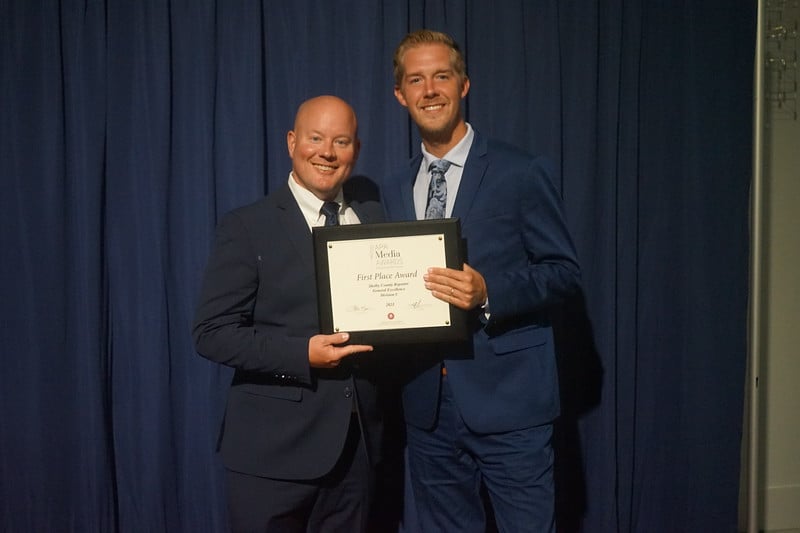 Alec Etheredge, right, has been named the general manager of Shelby County Newspapers, Inc. He takes over for Daniel Holmes, left, who worked with the company for 16 years. (File)

Etheredge, formerly managing editor and sports editor, is now in charge of the company’s day-to-day operations.

With SCNI for six years, Etheredge has worked in each newsroom department. He began as a staff writer in 2016 during his final semester at the University of Alabama before moving to a sports reporter role a few months later.

In 2017, he assumed the position of sports editor, managing sports coverage for the company’s five weekly papers and digital platforms. He was then named the managing editor in 2020, leading the newsroom through the COVID-19 pandemic and managing the day-to-day operations of the editorial staff.

During his six years, he has written a record number of APA-winning pieces in both news and sports while continuing the Shelby County Reporter’s longstanding tradition of winning the APA’s General Excellence award—a streak that now sits at 16 years in a row.

“This is a new and exciting opportunity to continue being a part of an award-winning team,” Etheredge said. “The responsibility of leading one of the southeast’s best newspapers is not one I take lightly. Journalism is a fast-paced industry that is constantly changing. Our efforts will be focused on continuing to serve the community through excellent journalism and comprehensive marketing solutions.”

As general manager, Etheredge will lead the staff in producing four weekly newspapers, six lifestyle magazines, six websites and numerous special sections. The company’s cornerstone publication is the Shelby County Reporter, founded in 1843 and has been named the best community newspaper by the Alabama Press Association each year since 2006.

The company produces newspapers for Shelby County, Alabaster, Pelham and the U.S. 280 area. In addition to those products, there are six magazines, including Shelby Living Magazine, Helena – The Magazine, Hoover’s Magazine, Vestavia Hills Magazine, Mountain Brook Magazine and Homewood Life.

Etheredge said he would continue to use the tools he learned in the newsroom to help the company evolve.

“As a reporter, I am not only trained to write good stories but find new and unique ideas to reach our audience,” he said. “That was a main goal of mine in transforming our news coverage, and I plan to continue that in this role to engage with new readers and advertisers.”

Etheredge and his wife, Sabrina, live in Chelsea with their chocolate lab, Hazel. He is a 2016 graduate of the University of Alabama’s college of communication and information sciences, where he majored in journalism with a concentration in sports journalism.

He has lived in Shelby County for most of his life, growing up in Leeds and moving to Hoover in eighth grade, eventually graduating from Spain Park High School.

Etheredge replaces former general manager Daniel Holmes, who was with Shelby County Newspapers, Inc. for more than 16 years. Holmes departs for a new opportunity in the financial services industry in the Birmingham area.

“It has been an honor to serve Shelby County Newspapers, Inc. for almost 16 years,” Holmes said. “I am excited about this next step, but it is bittersweet. During my time there, I made incredible friends at work and in the community. Serving Shelby County in the general manager role was an honor. It was rewarding for my family and me, and I can’t thank them enough.”

As part of the transition, Viridiana “Vee” Romero and Rhett McCreight have also taken on new roles within the company.

Romero, who has been with the company for five years, has been promoted to director of telemarketing and will oversee all inside sales and public notices for multiple operations within Boone Newspapers, Inc.

“In my new role, I am prepared and will welcome all challenges brought my way,” Romero said. “I also look forward to working with our incredibly talented team as we work together to exceed the expectations of internal and external customers.”

McCreight, who has been with the company for nine years and has managed the outside sales team, will now move into the role of director of sales, while he will also oversee sales at sister paper, the Clanton Advertiser.

“I look forward to continuing my work for this company and building relationships throughout the area,” McCreight said. “I enjoy meeting new people and showcasing our products to them each day.”