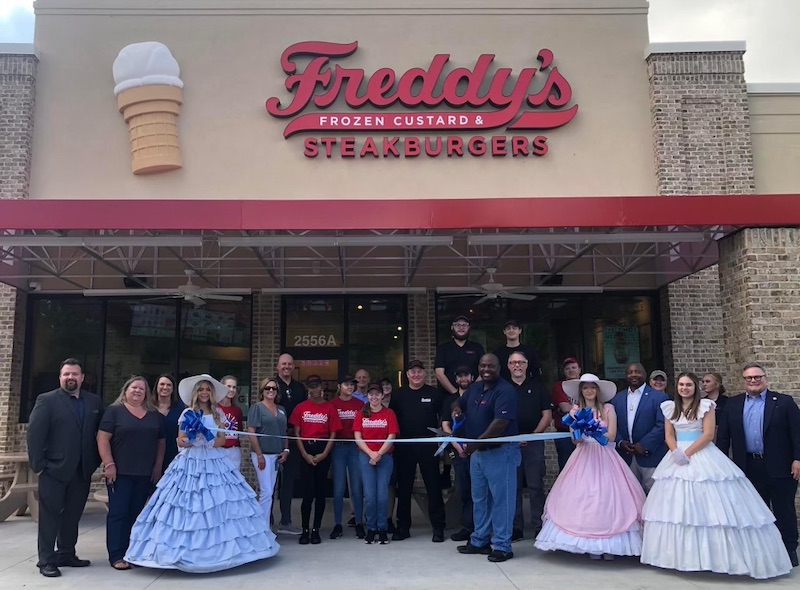 The long-awaited Helena location of Freddy’s Frozen Custard and Steakburgers opened to the public on Thursday, Aug. 4. (Contributed/Chase Rogers)

HELENA – After much anticipation, the Helena location of Freddy’s Frozen Custard and Steakburgers has finally opened.

The restaurant opened its doors to the public with a special ribbon cutting ceremony hosted by the Helena Business Association on Thursday, Aug. 4.

There was a significant crowd of people as everyone gathered to watch the ribbon cutting, and throughout the day the restaurant had a large number of people come inside and go through the drive-thru.

“Our newest opening marks a fourth Freddy’s restaurant in the Birmingham metro,” said Brian Pyle, franchise owner. “We’ve enjoyed getting to know the community through these locations and are thrilled to be expanding our concept in the southern part of the area. We look forward to serving Helena and reaching new guests who may not have tried our concept before.

The 2,600 square-foot, endcap restaurant seats 64 guests, has additional seating on the patio and drive-thru service.

To celebrate the opening, Freddy’s is donating 15 percent of sales of turtle sundaes from Aug. 4 – Sept. 4 to Helena’s Two by Two Animal Rescue, a nonprofit foster-based organization.

We are thrilled to be included in their grand opening,” Sonya King, the director of Two by Two, said. “A team of us went over and had lunch, and it was not only delicious but such a fun atmosphere. They will be seeing a lot of Two by Two Rescue in the future.”

Chase Rogers with the HBA said he and his fellow HBA members were thrilled to have such a large turnout for the opening.

“Members of the city council, Mayor Puckett, State Rep. Kenneth Paschal and the HBA were all in attendance for the festivities,” Rogers said. “Of course, we can’t have a ribbon-cutting without the Helena Belles, and they were phenomenal helping out. It was an honor to have some of Freddy’s corporate members from across the country on hand to show them a little Southern hospitality and show them what community support looks like. It was great honor, once again, to partner with the Shelby County Chamber of Commerce on another successful ribbon-cutting in Helena. It’s a great reminder that Helena means business when it comes to supporting our existing and new businesses.”

The Helena location of Freddy’s is located at 2556 Helena Road Suite A. Mobile ordering through the Freddy’s app and website is also available. Hours of operation are 10:30 a.m. till 10 p.m. Sunday through Thursday and 10:30 a.m. till 11 p.m. Friday and Saturday.