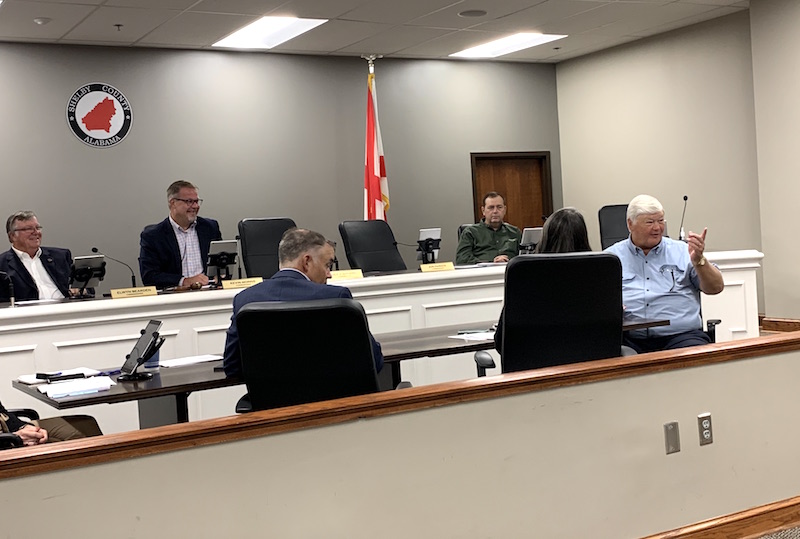 COLUMBIANA – The Shelby County Commission honored a longtime county employee for his work as he prepares to retire this month.

On Monday, Aug. 8, the Commission approved a resolution recognizing County Engineer Randy Cole for his nearly 31 years of service and leadership of the Shelby County Highway Department.

“This is my last official meeting,” Cole said. “I’m very humbled and appreciative. I just thank you all for the opportunity.”

Cole announced his plans to retire at the Commission’s May 9 meeting, noting he started working with the county in January 1991.

“I never thought I would be here 31 years,” Cole said. “Somebody told me you’ll know when it’s time to retire, and it’s time.”

As the county engineer, Cole has managed an engineering staff of licensed professional engineers, certified bridge inspectors, a road department with about 90 employees and an annual budget of nearly $19 million.

“The Shelby County Commission recognizes his consistent performance and unmatched excellence and value to the many public operations and projects that were accomplished through his direct input and delivery of timely work,” Cole’s resolution read. “Randy’s valuable tenure with Shelby County will be remembered for decades to come, and it is difficult to justly place into words the value, impact and daily responsibility that Randy consistently exhibited as county engineer.”

Cole has worked with 46 County Commissioners, other Alabama county engineers and commissioners, and many Shelby County staff members during his tenure.

“Randy has been a good friend of mine for all these years, and I’m proud of everything he has accomplished,” County Attorney Butch Ellis said. “He has been an outstanding employee of this county and has served us very well.”

Cole was elected president of the Association of County Engineers of Alabama in 1998 and 2011.

He also has served on many county, state and national boards, and in 2005, served as president of the National Association of County Engineers.

A retirement party for Cole will be held on Thursday, Aug. 11.

Cole’s successor, David Willingham, will assume all responsibilities of the county engineer and management of the Highway Department on Sept. 1.