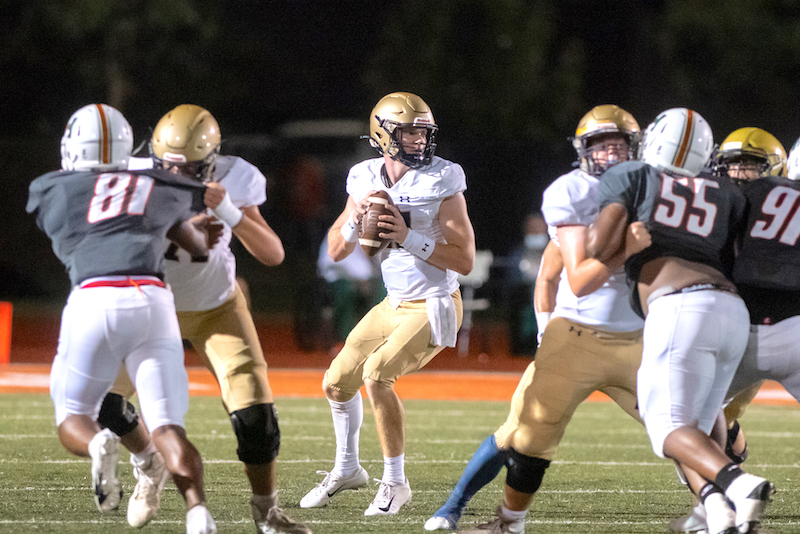 The Briarwood Lions have plenty of talent to replace from last year’s team, but a strong senior class led by 5-star quarterback Christopher Vizzina is ready for any obstacle that stands in their way. (File)

NORTH SHELBY – New challenges await the Briarwood Lions heading into the 2022 football season, but with a tight-knit senior class, there aren’t many obstacles that will hold them back.

Already in a difficult region the last two years in Class 6A, they now jump into a new region that won’t get any easier. Not only does Homewood make the move with them, but they’ll be up against Helena, who has won two of the last three region titles, Pelham, who has won a region title and finished inside the top two of the standings the last two years, Calera, who took a giant leap forward last year and returns most of the team this year, and many others.

But at Briarwood, there is an expectation to compete for a state championship every year, regardless of the region or classification.

There will be plenty of talent to replace on both sides of the ball, but as they do every season, the Lions will be ready to plug and place with a strong group of seniors.

The Briarwood quarterback has been a starter for four years with the Lions, and now comes the final season he has been waiting for.

With an arm that can make any throw and legs that can evade most defenders, he can make the difference in every game if the playmakers step up around him at receiver and offensive line.

That’s where the senior class comes into play. Vizzina has been playing with older kids the majority of his time at Briarwood, but now, he has his guys. The ones he grew up playing with, and he’s ready to go on one final special ride with each of them.

Having that trust in who is out there blocking for him and who is running routes down the field will make his job a lot easier, especially with the experience he has.

The biggest key to his success, however, will once again be at receiver.

A position that has been close to blossoming the last few years, injuries and depth have hurt the Lions at the position recently.

There are, however, several players ready to step in who already have a close bond with Vizzina.

Sawyer Russell and Robert Beason will be the two leaders at the position. They have both been reliable playmakers in the offseason, while Brady Waugh could also have an impact due to his hands at the position.

Walker Chambless, Jackson Barnes, Drew Mathes and Ben McNulty will all help as well, giving the team more depth at the position than it has had in a while.

At least two from that group will need to step up and prove themselves as go-to targets that can make plays after the catch and deep down the field.

Another inexperienced spot will come at the running back position, as the Lions will be forced to replace Luke Reebals.

A starter for the last two years, Reebals totaled 845 rushing yards, 315 receiving yards and 20 touchdowns last season. Losing his ability as a runner will be big, but his play in the passing game was also a huge help for Vizzina.

Looking to fill his shoes will be a committee of backs led by senior Colton Williams.

He will be joined by Evan Robson, a sophomore, and Cooper Higgins, a junior. Williams and Robson are both smaller-framed running backs who will use their vision and speed to beat defenders, while Higgins will be the bruiser back between the tackles.

Their success will largely depend on the success of the offensive line, but as we see every season, Briarwood always has a plan up front.

Even when they lose the majority of starters, the Lions are ready with a good group of upperclassmen to take the reins.

With three starters gone this season, that will be needed again.

They do get back returning starters Harrison Clemmer and Luke Schultz, who will be key leaders of the offensive line with solid size. Joining them will be senior Jason Bess, who brings back some experience, while Griffin Clark, John Taylor and Andres McAdams are more seniors who know what is expected when they are on the field.

Defensively, the Lions will have more talent to replace, but with a head coach who was one of the state’s best linebackers in his time at Briarwood, it’s a side of the ball that is always strong.

Like the offensive line, the defensive line will have turnover with most of the starting experience departing after last season.

That said, there is experience returning. Senior Preston King and junior Andrew Kassouf will be the most experienced players back this season as starters at times a year ago.

Kassouf will be an inside guy, while King will take on an edge position. Juniors Luke Dickinson and Max Luster will help Kassouf on the inside as trustworthy players, while senior Sully Wright and junior Case Reynolds will help on the edge.

Backing that group up is typically one of the strongest units on the team—linebacker.

This year, they return Grant Dickinson for his senior season, which is a huge plus to the defense, while Grey Reebals was one of the best defensive backs in the area last year and will now slide up to handle a linebacker role.

That gives the position two of the team’s top tacklers, while Higgins will also help at the position. Beyond those three, senior Wells Connell and junior Luke Taylor are ready for breakout seasons.

The reason the coaching staff felt comfortable putting Reebals at linebacker this season was because of a good core of players in the secondary.

Possibly the strongest position unit on the defense, the Lions will be led by the return of Peyton Steed. He’ll slide over from corner to safety, while fellow senior Jake Scott will join him.

Caleb Keller could also have a big season at safety, while seniors Harrison Self and Bo Barnes will be the starting cornerbacks as athletic playmakers. In addition to those two, Ethan Carr is ready to rotate in and take on an important role as well.

As for special teams, Briarwood will replace everything but returning placekicker Aidan Punch. He will return as a trustworthy kicker with another year of experience, while the holder, snapping and punting duties are being figured out in fall practice.

Prediction (7-3): This season will be a challenging one for the Lions, and it is probably their toughest since rejoining the 6A classification ahead of the 2020 season. Their region isn’t what concerns me the most. I think they can easily earn a playoff spot despite its challenges, but the out-of-region schedule is brutal with three games against 7A opponents and another against the defending 6A State Champion. All four of those could be losses if they aren’t careful, which already puts them at 6-4 assuming they sweep through the region. That said, this team has been so well coached for so long and is always up for any physical test that awaits. If a receiver or two emerges, they could be really dangerous with the threat of Vizzina, but the defense alone always keeps them in games. It will be a difficult ride, but it’s hard to predict a Briarwood team to struggle. As the No. 4 team in the preseason rankings, that seems to be the consensus. Expect the Lions to compete for another region title and a possible deep playoff run.