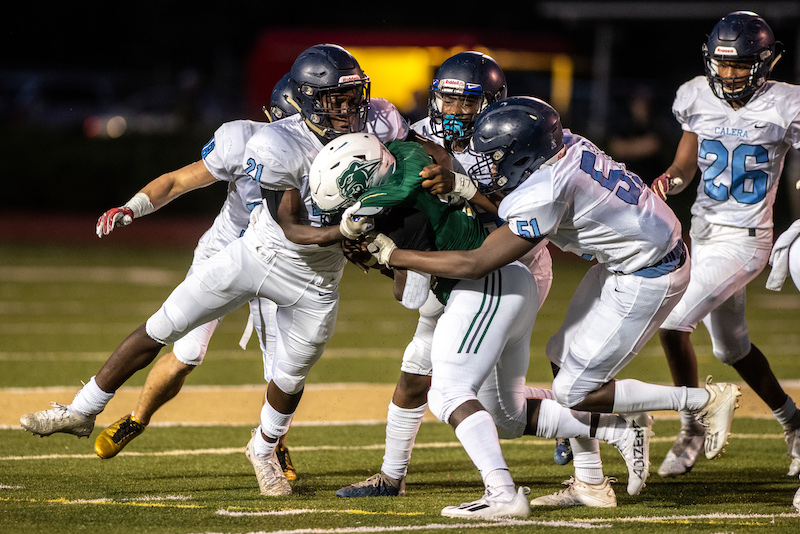 Fresh off a successful first season under Jason Hamlin, the Calera Eagles have the potential to be a dangerous team this season with the most returning talent they’ve had at the 6A level. (File)

That speaks volumes what head coach Jason Hamlin was able to do for the Eagles in year one by leading them to a 7-4 record, a third-place finish in the region and their first-ever playoff berth in Class 6A.

Now, shifting gears into 2022, the focus has turned to handling new expectations.

With the return of a starting quarterback who threw for more than 2,000 yards, a trustworthy running back, the team’s second-leading receiver and a defense that could be one of the best in the state, there is plenty of reason for optimism.

That said, the Eagles haven’t had this kind of expectation at the 6A level yet.

Not only do they have to handle that pressure, but the schedule is also full of challenges with Briarwood and Homewood now thrown into the region along with the same former challengers of county foes Helena and Pelham, who have won the last two region titles.

Calera is equipped for a run at a top-two finish in the region this year, but so are several others, meaning the outcome will largely depend on what happens late in games.

Who can step up and make plays at the right moment in clutch situations? Well, the Eagles will have several ready to do that, including quarterback Preston Stokes.

The starter last season, Stokes totaled 2,259 yards and 26 touchdowns as a junior in his first season.

Now, he is experienced and more comfortable. Last season, he was able to dump the ball off quickly to current Alabama receiver Kobe Prentice, but this year, he has improved on making reads and going through his reads in the pocket.

He should be able to take a big step forward this season, and he still has a trustworthy athlete he can look toward with the return of receiver Braylyn Farrington.

Last season, Farrington totaled 624 yards and five touchdowns on 43 receptions, and while that isn’t the same as Prentice’s 1,231 yards and 18 touchdowns, it was impressive for the touches he got.

A speedy track athlete, similar to Prentice, Farrington is now set to lead at the position this season and will likely face double coverage a lot of the season or the opposing team’s best corner.

That, however, just paves the way for others to step up and there are plenty of exciting athletes ready to capitalize. Dalton Ash and Tra’mun Gaines are two of those receivers, while DJ Goodman, Skyler Strong, CJ Tolbert and KD Young will all be right alongside them.

It makes for a deeper and more athletic group across the board, and with a strong arm returning, that’s a dangerous combination for any defense, especially if they pay too much attention to Farrington.

Not only that, but the Eagles will once again be strong in the backfield with the return of running back Daniel Carmona.

They lose starter Chris Cotton, but Carmona split time with him the last two years and there shouldn’t be any drop off at the position this season, creating a balanced attack that makes Calera’s offense one of the most dangerous in the state.

Carmona will also get help from Amari Brundidge, who played some last year and has good vision. Both backs are physical, downhill runners, who will make defenses pay if they focus too much on a dangerous pass game.

As if that didn’t convince you enough as to how successful this year’s offense can be, the Eagles also return three starters up front blocking for those dangerous athletes.

Jaquon Barron, Kharlis Cooper and Walker Harris are those three returnees to the offensive line, while several others are returning to the line after suffering injuries early last year as projected starters.

Mason Colmar and Brody Odum should both be back with important roles as leaders up front, while Stewart Goldman will also either start or rotate in to complete a special position unit.

As deep as the offense is, the defense may be even more talented.

A side of the ball that has improved by more than 10 points per game the last two years, the defense will return just about every key starter from last season.

Starting up front on the defensive line, the Eagles get back three starters, including Curtis Oliver-Avery, Solomon Moore and Julius Marsh.

Beyond those three starters, Jeremiah Henderson, Jamichael Vines and Cam Rutherford are all experienced players who can do a variety of different things up front.

The linebacker position, however, is the most dangerous unit on the team.

Depth may be the only concern, but the Eagles return all four starters from last year’s team, starting with Michael Banks-Mason, Mason Green and CJ Richardson.

Banks-Mason led the team with more than 120 tackles last year, including 20 for loss, while Green and Richardson both had more than 70 tackles and combined for 10 tackles for loss.

Calera will also get back Dekendrick Bennett for his senior season. He is expected to have similar production with a big step forward, while younger players know they are next in line and are using that to start creating depth.

In the secondary, the Eagles will take their biggest hit with Wesley Head departing after totaling five interceptions and more than 50 tackles last season.

That said, Michael Benson also had a big season and will return to lead at the safety position, while Zymeer Jemison is another returning starter at corner. Jaylen Mitchell also brings back some experience to the corner position, while Ahmari Collins will help there as a junior.

Alongside Benson at safety will be Ayden Slaten and Crayton Carlee, who are two upperclassmen ready to make a difference.

Calera will also benefit from the return of junior kicker TJ Hernandez, who handled all placekicking duties. Punter, however, is still up in the air ahead of the season.

Prediction (7-3): Let me start by saying the Eagles have the potential to be as good as they want to be this season. The schedule, however, is slightly more challenging, which makes it tough to look into a crystal ball and see where they’ll fall when it’s all said and done. The offense won’t take a step back and the defense should be even better. Last year, six of the team’s 11 games were decided by 10 points or less, and I expect more one or two possession games this season. The defense making a late stand or Stokes and the offense making a game-winning drive could be the difference in whether this team wins six, seven, eight or more this season. Regardless, they are a playoff team again in 2022.