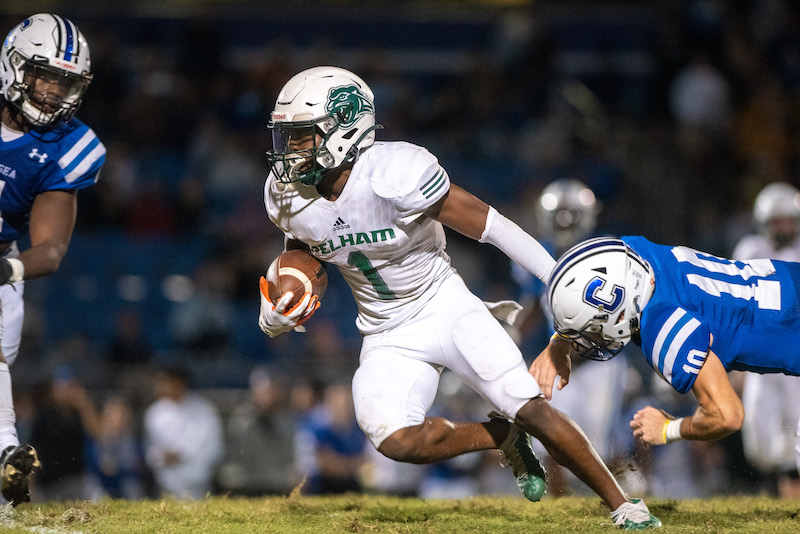 The Pelham Panthers face one of their most difficult schedules in years with a new head coach and new faces at two key offensive positions, but the expectations remain the same ahead of the 2022 season. (File)

PELHAM – It is time for a new era of Pelham High School football after Tom Causey departed as head coach in the offseason following seven seasons at the helm.

In steps Mike Vickery, who, after spending six years leading the Northridge Jaguars, will now look to build off the recent upward trend the Panthers have set the last three years.

Causey was able to lead Pelham to the playoffs in four of the last five years and the team’s first region title since 2007 during the 2020 season, but now, it becomes about taking the next step.

Despite some changes and the adjustment period with a new coach, Vickery and the 2022 Pelham team will enter this season with hopes of picking up their first playoff win since 2006.

That, however, won’t come easily with the most challenging schedule they’ve faced in several years and some new faces at several key positions.

But the culture has changed in recent years, and Vickery won’t change that, while several key leaders and athletes are ready to be the ones who take the program to the next level.

If the Panthers want to continue taking strides, finding the right fit at quarterback will be important.

Xavier and Will Lankford have held down the position as brothers for the last four years, but now, they’ll transition from Will’s two years as the starter into a new quarterback who will have to replace his 1,326 passing yards, 459 rushing yards and 23 touchdowns as a senior.

Battling for that responsibility going into fall practice were two of the team’s top athletes in Clayton Mains and Drake Hickox. Mains is a left-handed junior quarterback who can make plays with his arm or legs, while Hickox has played the position in the past at the junior varsity level and is seeing the field well, while picking up on the offensive changes implemented by the new head coach.

Whoever wins the position will have to be able to command the offense and make smart decisions consistently, which shouldn’t be a problem for either of these guys as long as players step up around them.

And one of the most important positions that needs to step up is running back.

Possibly a bigger concern than quarterback, the Panthers will lose Gabe Gamble as a three-year player and two-year starter, who replaced another two-year starter in Dylan Peterson.

Now, they’ll have a group of fresh running backs expected to take on important roles. It’s unknown what this year’s offense will look like, but the run game has been the top priority the last several years, and with a new quarterback, I would expect the Panthers to be pretty balanced once again if not run heavy.

Ra-Sen Martin will be the lead guy at the position, hopeful to replace Gamble’s 1,306 yards from last season. A multi-sport athlete, he has worked hard in the weight room and quickly proven to the coaches he is the guy that fits what they need.

Depth could also be a concern, but there will be others rotating in to help take pressure off Martin. If he stays healthy, however, he could turn into a back that takes a lot of pressure off the passing game.

Should the passing game need to shoulder a lot of the load, that shouldn’t be a problem either. Even with a new quarterback, a strong group of receivers should help whoever wins the job.

A big reason for that is the return of Darius Copeland, who could be the team’s best athlete. He returns 390 receiving yards and four touchdowns from last season, while he also chipped in 109 rushing yards.

He’ll be the leader of the unit, but Kamari Hollis is another two-sport athlete who should make some athletic plays. Not only can he go up and get the ball, but he is extremely fast both after the catch and running routes.

The Panthers will also return Trey Corkill as a starter, while junior Will McGough is one of the team’s fastest players who will step into a big role this season as well.

The offensive line is full of question marks heading into the season with a new head coach just starting to get a look at the group in pads.

That said, it has been one of the team’s highlights the last several years, and that shouldn’t change this season.

Pelham will return senior Jackson Davenport and junior Cash Tatum as starters from last year’s team, while Brian Terry is another good-sized lineman ready to fill an important role. Those three will anchor the unit, while multiple players are still battling to fill the other two spots.

It will obviously be a key position in determining the success of this year’s team with a new quarterback and running back relying heavily on them for comfort.

The same can be said for the defensive line, which will take a hit due to the departure of four seniors from last year’s team.

That is a lot of production to replace, but the coaches seem confident in an exciting group of promising athletes.

Keon Brooks is a senior who will lead at the position off the end, while James Schmucker and Jaden Williams are two juniors who will also make a difference.

Beyond that, there are six players who will rotate in and out of the lineup, which is what excites the coaches more than anything. That depth will allow the line to stay fresh throughout a physical schedule.

A big benefit to the defenses will be the backend with a strong group of linebackers and secondary players.

Even with the loss of Brayden Marlow, the Panthers will return a very good group of linebackers that could be the strongest position unit on the team.

The group will also return linebacker Will Felton as a starter, giving them four reliable players in addition to others who will rotate for depth.

Behind them, the secondary will feature one of the best players on the team in Jamal Miles, who totaled 30 tackles, five pass breakups and an interception last season.

He made several unbelievable plays defensively a season ago, largely matched up against the opposing team’s best receiver.

He’ll lead the group, while Jake Fox, a receiver last year, will also move to the position and make a difference in addition to any time he spends on offense. You could also see Copeland here as a speedy and athletic presence, while others are battling in fall practice to form a deep group.

Pelham will also return kicker Jake Gardner to handle the kicking duties this season, while Brodie Martin will be a trustworthy snapper on special teams.

Prediction (5-5): Pelham’s region became much more difficult this season, which ultimately makes it tough to see the outcome. Not only do they still have rivals Helena and Calera in the region, but added are Briarwood and Homewood, who will likely be strong contenders for the region title. Right there alone, you have five times who could compete for the four playoff spots out of the region. That doesn’t include Pelham’s out-of-region opponents, which includes three 7A opponents, or other region foes. All that to say, Pelham should compete in just about every game this season, but each one, at this point, is about 50-50 as to whether they’ll win. The scale could easily tip one way or another depending on how well the players buy in to Vickery’s coaching style. The defense will be enough to keep this year’s team in games, but it could be the offensive progression with a new quarterback and running back that ultimately decides if this team finishes above .500 or below.