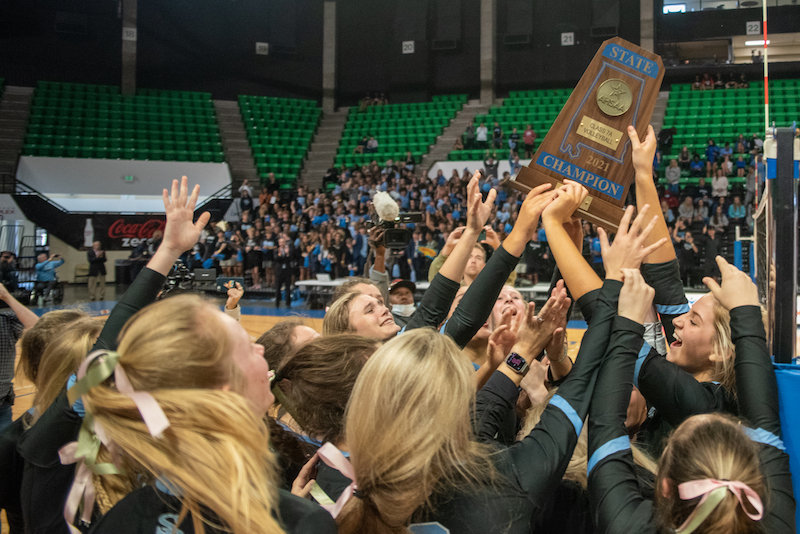 Following its first state championship in school history, Spain Park’s volleyball program has a good group of players returning with the hope of defending the Class 7A title this season. (File)

HOOVER – It’s hard to imagine a more dominant season than the one Kellye Bowen and the Spain Park Jaguars had en route to the Class 7A state volleyball championship last year.

The Jags never lost at home, beat the 6A and 5A champions twice, avenged both their losses to in-state opponents with sweeps later on in the year and lost only one set in their entire postseason run.

They also racked up eight All-County selections and three All-State selections as senior Audrey Rothman and Bowen swept player and coach of the year awards.

Despite the success, Bowen understands last season’s results do not guarantee anything in 2022 and continues to push her team toward consistent daily improvement.

“I’ve never talked about winning a state title in our program,” Bowen said. “We’ve focused on getting 1-percent better each day, and if that gets us in the state title match, then great,” Bowen said. “Just because we’ve had success doesn’t mean success is inherited or continued. It’s up to the players to execute the vision of our program.”

Spain Park loses an incredibly talented senior class that includes Rothman along with All-County performers Bella Halyard, Liv Mayers, Paige Ingersoll and Brooke Gober, but the Jaguars bring back a senior class that won’t be any less challenging.

Emily Breazeale and Brooklyn Allison headline the class and return with All-State credentials along with Lilly Johnson and Haley Thompson, who both made the All-County second team.

Bowen has her deepest senior group with proven experience and a chance to put their own stamp in Spain Park history after the school’s first title last year.

“We do have eight seniors and they’ve seen great leadership in past seasons,” she said. “Now, it’s their turn to accept the opportunity to lead this team this season. They are now responsible for their own success.”

The Jaguars also have more help coming down the pipeline as several underclassmen are primed to break out in the fall.

Megan Ingersoll, who joined the varsity last year as an eighth grader, and sophomore Reagan Gilbert have “shown good contributions this summer” and look to reinforce a team loaded with upperclassmen.

Many of the Jags are involved in club volleyball in the offseason as they continued to hone their skills. Bowen’s task as the head coach has been to nurture that growth, keep team workouts consistent and maintain her squad’s rapport with each other.

“We have been in the weight room this spring lifting and preparing for the season,” she said. “We’ve done our two hours a week during the specified time period. It’s hard to continue to do this effectively because of the girls in club season, so we try our best to do a good balance when they need time off. We have done a lot in July working on relationships and chemistry. We went to Foley for a play date, and during our time there, we worked on relationships with each other.”

Bowen has also experimented with her practices and kept an open mind recognizing that each team she coaches is unique.

The standards of the program don’t change, but it’s important to adapt to the new club and the different dynamics therein.

Bowen, who took over a Spain Park program that had never been to a state tournament in school history prior to her arrival in 2014, remains fluid, continuing to build the Jaguars into a powerhouse.