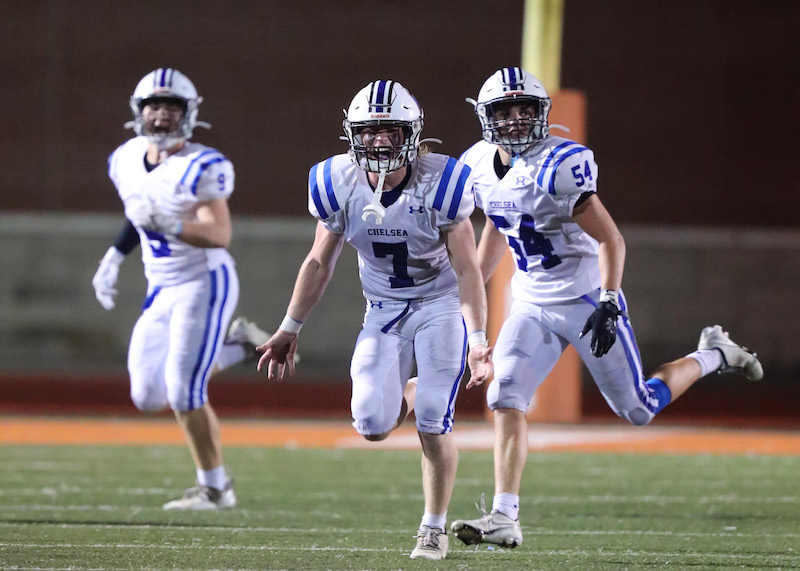 The Chelsea Hornets will have a few important holes to fill on this year’s team, but they aren’t backing down from the challenges with a new coach and new classification. (File)

CHELSEA – A fresh new era is here for the Chelsea Hornets heading into the 2022 football season, and it will be one of the biggest challenges they’ve faced as a program.

Not only will they be under the leadership of first-year head coach Todd Cassity, but they enter the gauntlet of Class 7A, Region 3 featuring three teams ranked inside the top five and the three-time defending state champion.

That said, excitement seems to be growing around the program in the offseason with Cassity and the quarterback club quick to make changes. The Hornets are making some simple adjustments to the program and some big changes as well.

Some of those upgrades will come in the locker room, while the press box will be updated and the playing surface will be a brand new, state-of-the-art turf with an actual track around the field rather than a concrete slab.

While none of that will win games on the field, it will help build enthusiasm around the program and make them feel a true part of the 7A classification.

It has also led to hard work from the players heading into the season, as Cassity has quickly started preparing his team for the difficult tasks that lie ahead.

With a lot of turnover from last year’s team at several of the most key positions, that has been important.

One of those positions that will have a huge question mark going into the season is quarterback.

Chelsea will lose Hayden Garrison, who started the last two years at the position and threw for more than 2,000 yards last year.

Now, the reins will be turned over to Carter Dotson, a 6-foot-3, 175-pound sophomore. The size and potential is there, but he is young with a lot to learn and no experience starting at the varsity level, especially against the difficulty of the region the Hornets will be in.

Dotson, however, has progressed drastically throughout the summer and early in fall practice. Once he gets his timing down and if he can learn to progress through his reads, he will become a dangerous threat this season with a talented group of receivers back.

His success, however, will largely depend on the offensive line.

He will have talent at other skill positions on offense, but the offensive line will have several question marks with mostly new faces this season.

Senior Cesar Madrid and junior Zach Hair will be the two leaders of the unit with sizes of 6-foot-3. Hair, weighing close to 275 pounds, will be the only starter back this season, while Madrid adds veteran experience.

If that unit steps up, the rest of the offense will have chances to flourish with a starting running back and several receivers returning.

Emerson Russell will return to handle the running back role as a junior after playing a lot last year. He is a smaller back, but he is dynamic because of his agility and speed.

He’ll be joined by Leighton Garrard, who will be the one who can run between the tackles giving the Hornets a solid one-two punch.

That will help take a lot of pressure off Dotson, but the biggest benefit to him aside from the offensive line stepping up is the return of three seniors to the receiver position.

EJ Hudnall, JyDarian McKinney and MJ Conrad are all back this season as athletic playmakers who made a major impact on the team last year. All have strong route-running ability and can make plays both down the field and after the catch.

In addition to those three, Jaxon Shuttlesworth is a junior who will be the tallest at the position and brings a lot of upside.

Moving over to the defensive side of the football, the Hornets have quickly formed a close relationship as a group.

There is potential at every position, which could be what helps this team compete early in the season to gain confidence and help the offense grow with young players on that side.

Up front, Chelsea will lose one of their top defensive linemen in Emmanuel Waller after he transferred in the offseason, but that doesn’t limit the possibilities for this year’s unit.

Chelsea will return senior starter Jackson Laughlin, who has a size of 6-foot-4, 240 pounds, while junior Ian Osbourn is almost the identical size. Those two will stand on each side of the line as edge rushers, while senior Jaeden Bennett will handle the nose guard position.

The big question mark, especially at the 7A level, will be depth. Those three should handle the position well, but depth will have to emerge to take pressure off of them.

Backing that group up, however, will be a strong group of linebackers.

The Hornets will lose leading tackler Kyler Simmons, but Brady Clements finished second on the team with 91 tackles last season and returns to lead the defense as a senior.

He’ll be joined by returning starter and fellow senior Cody Fortenberry, who is expected to blossom into being another team leader alongside Clements.

Those two will be two of the best players on the team regardless of position, while juniors Carter Parrish and Anderson Brooks will join them at the unit as promising players ready to storm onto the scene.

The secondary will face some early questions with just one starter back, but that starter is Chris McNeill, who should be able to help get newcomers up to speed this season.

Owen Key and Drew Cheslock are two juniors expected to handle the safety position this year with a lot of upside, while three are still battling to handle the other corner position opposite of McNeill.

A big benefit for the Hornets this season will be the kicking game with the return of kickers Jack Seymour and Luke Miller.

Seymour can handle place kicking and punter with a strong leg, while Luke Miller kicked a lot as an eighth grader last year and has a lot of promise as an accurate kicker who also plays soccer.

In tight games, that duo should help Chelsea feel good.

Prediction (3-7): Looking through the schedule, it is tough to find a lot of wins this season. The Hornets open with two 6A teams that they lost to last year before jumping into the challenging 7A schedule with only one other 6A opponent on the schedule coming on Sept. 23 against Pelham who they beat by three last season. Beyond that, there are a few of 7A games they should compete in, but it is tough to predict several wins in their first year against this schedule. That, however, could change if the offensive and defensive lines prove they can handle their jobs. Those two position units will make or break this year’s team, and they’ll have to be ready to go early. The first four games will be very telling with that stretch marking the easiest of the season. One thing is for sure, Cassity is doing his part and the players on the team seem rejuvenated in their work effort leading up to the season. I don’t foresee any outcome where there is a lack of effort this season.