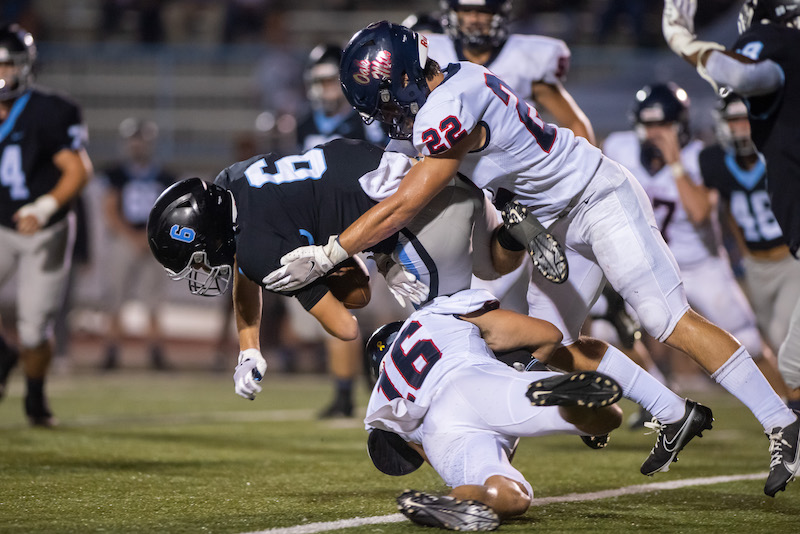 With back-to-back 7-5 seasons and consecutive trips to the quarterfinals, the Oak Mountain Eagles are ready to continue their upward trend during the 2022 football season. (File)

NORTH SHELBY – Confidence is at an all-time high for the Oak Mountain Eagles and the expectation is beginning to shift after two back-to-back 7-5 seasons.

Going into their second year under head coach Tyler Crane, the Eagles have made the quarterfinals of the playoffs the last two seasons and the players are using that to give them an edge in belief.

Now, heading into the 2022 season, there will be some adjustments that have to be made with some key players departing, including four-year starting quarterback Evan Smith, but there is plenty of reason for optimism.

In a difficult Class 7A, Region 3 that features three teams inside the top five of the preseason rankings, Oak Mountain looks to be the next team in line to compete for one of the four playoff spots.

That said, the region appears even more balanced than in years’ past, which could mean the season going a million different direction.

But if you step in the building at Oak Mountain, you can feel the sense of urgency and seriousness by which the coaching staff and players take their daily tasks.

That attitude won’t win the games on the field, but it will give the Eagles their best chance to do so.

It’s also something that is playing a major role in helping new quarterback Will O’Dell gain command of the position.

A sophomore, he has quickly taken ownership of the position, constantly verbalizing what he is seeing and what he is doing wrong before the coaches can even get it out.

That has been huge in his progression, as he has the job of replacing Smith’s 1,110 rushing yards and 1,184 passing yards from last season.

There will be a drop off from one of the best athletes the county has seen in recent history, but the potential is there for O’Dell to become his own kind of star.

Standing at 6-foot-3, 190 pounds, he possesses the ideal frame of a quarterback, especially in a physical region, while his arm is getting stronger each day.

Trust in his teammates will be key in helping him fully progress this season, which means they will have to step up.

One of the biggest boosts for him will be the guys up front protecting him each play.

Oak Mountain returns three starters to the offensive line with Luke Oswalt, Sawyer Hutto and Hudson Youngblood all back as leaders.

Sophomore Cordell Williams will also step into a starting role after getting some action a season ago, while Jackson Blackwell is another player the coaching staff is hoping will step up.

That unit alone could make or break this year’s offense with a new quarterback needing that protection to be able to progress through his reads.

It will also help him and the receivers have the time to form connections with some new faces out wide.

The Eagles are deep at the position, but they lack experience.

Senior DJ Stone will be the leader after playing a season ago and showing progress, while Tristan Vardaman and Zach Fitzgerald should play big roles with good hands.

Joining those three will be a deep group with Sawyer Smith, Peyton Swann, Davis Stallworth, Walker Shook and others ready to step up for their sophomore QB.

Running back will also be a bright spot with the return of Trey Vassell. A contributor all of last year, Vassell is a powerful back with a frame of 5-foot-10, 205 pounds.

He’ll be joined in the backfield by Davion Foster as a speedy back, as that duo will provide the ideal one-two punch at the position, known as thunder and lightning.

Those two seniors will be the leaders at the position, while freshman La’Kamren Meadows is a young playmaker who could emerge as a key contributor as well.

That group should help round out a solid offense this season, but last year, as successful as the offense was, it was the defense that continued taking major strides forward.

Last year, that side of the ball held its own against some of the state’s best offenses, and this year, the defense should remain strong.

On the defensive line, which Crane says is the biggest key to success in the region, Oak Mountain will return senior Davis Coggin, while Emmanuel Waller has transferred from Chelsea with two years of starting experience under his belt.

Both of those players will be dangerous leaders up front, while Caleb Jaworski, JD Miller and Ty Campbell are ready to step in and fill out the rest of the line. Crane also said to keep an eye on eighth grader Baroc Willis, who could emerge as a breakout edge rusher before even reaching high school.

Behind that group, team leader Garrett Murphy will head the linebacker position after totaling 120 tackles and 16 tackles for loss to lead the team in tackles last season.

Joining him will be returning starter Carter Lehman, while Jacob Porco and Hunter Cox should also be plugged in as starters who are showing a lot of potential.

The secondary will close out what should be another impressive defense with two key starters returning.

The loss of Corbitt Grundhoefer will be a big one, but the Eagles return both Devan Moss and Bobby Laury. Moss is one of the team’s best athletes, while Laury is expected to take a big leap forward this season.

Joining those two will be Drowdy Hackbarth, the backup quarterback, and Robert Yoder. Depth may be a concern heading into the season, but the coaching staff will likely have that built up after the first couple of weeks.

In addition to his role as the leading tackler at linebacker, Murhpy will return to handle kicking duties for Oak Mountain this year as well. A soccer player for the Eagles, he has a strong leg and can make any kick, while Jack Ronilo will handle long snapping.

Prediction (6-4): To me, there is no question that this year’s defense has the potential to be the best it has been in school history. There is that much potential returning on the defensive side of the ball. There may be some depth concerns in the challenging Class 7A, Region 3, but the biggest concern comes offensively. With Will O’Dell taking the reins at quarterback, how productive will he be with a lack of returnees at receiver. That’s the biggest question mark for the team as a whole this year. I do think he will be able to gain confidence early in the season and the Eagles will be able to get off to another fast start, which could help for a strong push against the toughest teams in the second half of the schedule. This season, however, will largely depend on how several teams will fair with new head coaches. Will Hoover take a step back? Will Spain Park and Vestavia improve? Those are unanswered questions right now that could make all the difference in the world. Oak Mountain is talented enough defensively and has so much upside offensively, however, that the Eagles should see another winning season.