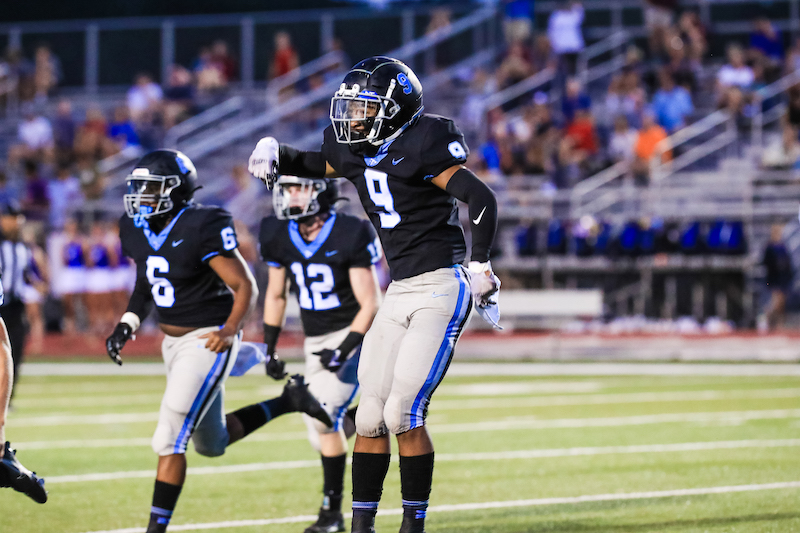 New Spain Park head football coach Tim Vakakes will have a strong group of returning players for his first year at the helm as he looks to turn the program around. (File)

HOOVER – After nine years under Shawn Raney, a new era of Spain Park football has begun ahead of the 2022 football season with the arrival of new head coach Tim Vakakes.

Vakakes becomes the seventh coach in the school’s history after serving as the leader of Jackson-Olin’s football team since 2013.

He has quickly tried to rejuvenate the program with new additions to facilities and excitement around daily preparation to help regain Spain Park’s mark as one of the best teams in the state.

In recent years, the Jaguars, however, have gone the wrong direction with four consecutive 4-6 seasons, while they haven’t won more than six games since 2016.

So, the question for Vakakes quickly becomes how to immediately make a difference.

The answer to that question is pretty simple, show trust in his players and staff and have them show it back.

The tools are in place for this year to be successful, but it will take hard work and trust to accomplish an immediate turnaround with the difficult schedule that comes along with Class 7A, Region 3.

Perhaps the biggest key to pointing the team in the right direction is the return of Evan Smallwood.

Someone who leads by example, Smallwood is a physical player who isn’t afraid of contact and can make plays with his legs or his arm.

As a returning starter, he totaled 814 passing yards and six touchdowns last year and should be in even better shape for a big season this year with the talent that returns around him and the leadership intangibles he possesses.

Zamir Farris will be one of those returning players to the running back position who can help take a lot of pressure off Smallwood.

Farris totaled 732 rushing yards to lead the team as the starter last year. Now, another year experienced, he should be even more of a threat as a dynamic back who can use his agility and speed to evade defenders.

At receiver, the Jags will lose leading receiver Pierson Cole, but they will be deep at the position with George Gilbert, JR Thompson and Jonathan Bibbs all expected to make a difference this season as speedy and athletic wideouts.

Depth beyond that will be important, but if those three can make an early impact and stay healthy, they’ll be in great shape.

That same issue will be seen up front on the offensive line with the coaching staff still looking for three starters heading into fall practice.

The return of starters Morgan Bowden and Rashad Burts, however, will make a huge difference this season.

Bowden is a 6-foot-1, 265-pound senior, while Burts is also a senior with a frame of 5-foot-9, 270 pounds. Those two have multiple years of experience and will help bring along the others who emerge.

While there will be some question marks offensively, particularly on the offensive line, the defense is loaded with returning talent.

Up front, the defensive line will be one of the best positions on the team.

Returning starters Brian Alston and Caldwell Bussey will lead the unit with similar frames of 6-foot-3, 250 pounds. Both were very productive last year and should up that production this season.

Sophomores Nick Alston and Jared Smith will be two young and exciting playmakers ready to help on the line, while depth is also starting to emerge with several ready to fill in roles where needed.

Seniors Jack Mitchell and Jack Kendrick add two more returning starters to the defense at the linebacker position. Both put together impressive seasons last year as athletic players, while junior Landon Huey also played in multiple games a season ago.

Those three will be the leaders and will help younger players gain confidence as the season goes along.

As talented as the front seven can be if depth pans out, the secondary may be the most dangerous part of this year’s defense.

Senior Alex Smith and junior Jamari Mosely are both back this season as returning starters after combining for 10 pass breakups and four interceptions a season ago.

Kelby Roberson also has some experience as a junior who has the coaching staff extremely excited.

Those three can anchor the secondary, which will allow the coaches to help others get prepared leading into the season.

Special teams will also return starting kicker Alex Lloyd from last year’s team as one of the county’s top kickers, while Evan Bishop will return to handle long snapping as one of the best in the state.

Prediction (6-4): I’m a believer that Spain Park could be the surprise team in a region that had a lot of coaching turnover in the offseason. Hoover, Vestavia Hills has a new coach and Chelsea is new to 7A with a new coach. Beyond that, Oak Mountain and Tuscaloosa County are two teams with second-year head coaches, while the Jags will take on three local 6A teams in non-region play. It feels like a pretty wide open season compared to years’ past, and it wouldn’t surprise me if Spain Park is at least competing for a three or four seed in the final weeks of the season. Sure, any game on their schedule could go either way with the exception of maybe two matchups, but being around the program, there is something different about this year’s group. Not only does that make you feel confident in their ability, but they have a ton back on both sides of the ball. Depth may be the only concern, but Spain Park could have a ceiling of at least 8-2 if they perform to their ability. Under a first-year head coach and off four consecutive losing seasons, however, success will have to be proven this year.