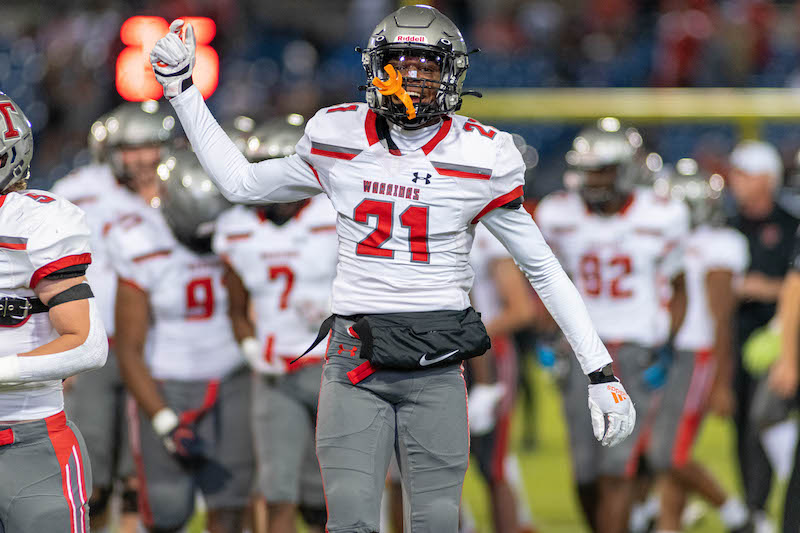 The Thompson Warriors have turned into the powerhouse team in Alabama with three consecutive class 7A State Championships. Now, they'll enter the season No. 1 in the standings and hopeful for a fourth title in a row. (File)

ALABASTER – How do you keep a team hungry after winning three consecutive championships?

That has been the task at hand for Thompson head football coach Mark Freeman going into the 2022 season, but the answer is quite simple.

This year’s group has accomplished nothing as a team.

Some of the players have been key in at least one of the championships if not all three, but many are new to the starting lineup, creating a nucleus of players with much to prove.

And for the senior class, goal number one is helping the younger players realize that.

This year’s team does feature its share of elite talent, similar to the past five seasons, but the talent won’t win a fourth state championship in a row. The only way to accomplish that tall task and continue their stronghold on the state is for the Warriors to outwork every team trying to be the one that knocks them from the throne and doing so together.

Heading into a new season with the same expectations, Thompson will see a lot of turnover at several key positions, especially on the offensive side of the football.

On that side alone, the Warriors will lose All-State starting quarterback Conner Harrell, receiver and Mr. Football Ryan Peppins, their other two top receivers and their three best running backs.

For anyone else, a shot at the state championship may be out of reach with that alone.

For Thompson, however, there are players ready to step in and attempt to fill those roles that should prevent drastic drop-offs.

Of course, it won’t be easy, but the offense is designed to put the players in the best spot to make plays, while the offensive line will give them plenty of time to do so.

At quarterback, Thompson will lose Harrell, who threw for 3,126 yards and 47 touchdowns last year with an additional 405 yards. That’s two years of starting experience from a QB who was on the All-State Team two years in a row and the Back of the Year in 2020.

If we’ve learned anything over the last several years, however, it’s that Thompson will be ready for that hit.

The last three quarterbacks have all been named the best offensive players in the state at least once in their tenure and have made the All-State team every year.

Zach Sims now steps in as a junior after getting several games of experience last year when he was forced to replace an injured Harrell.

That also included the state championship game in which he helped Thompson jump out to a 14-0 lead with several perfect passes.

Now, with an offseason of preparation as the starter, he should be the next one to step in and continue the expectation the others have built.

The bigger question marks will be who steps up around him at the other skill positions.

Top targets are gone with Peppins, Justin Pegues and Jaylen Ward all graduating, which leaves new faces needing to step in and fill big roles.

Deuce Oliver will be one of those expected to take a giant step forward this season after playing some a season ago and playing extremely well in the state championship game. He and Sims seemingly already had a connection then and that should only grow this season.

In addition to him, Kolby Hearn, Noah Hill Shea, Korbyn Williams and Roman Mothershed will all step into key roles at the position this season.

The Warriors will need at least two receivers to emerge as top targets to prevent double teams and open up the field more. Should that happen early in the season against difficult tests, the sky is the limit for this offense.

Running back will face similar issues early with Pegues gone as the leading rusher, as well as Ahmari Bolden and Brandon Franklin.

That said, the potential is possibly even more exciting this season with the unknown of what could come from AJ Green and Michael Dujon.

Both players have big shoes to fill, but Green is a player who has been talked about for two years and will now have a chance to lead, while Dujon is a sophomore that is already creating excitement.

Both can play fast or physical, and of course, they’ll be ready to catch the ball in a high-powered offense.

The biggest benefit for the skill players this season is the return of a strong offensive line that includes three returning starters.

Stanton Ramil, who stands at 6-foot-7, 310 pounds, will be th eunit’s leader as a two-year starter. Behind him, Noah Watts and Ryan Walker both got time as starters last season and return, while Steven Lillitch adds a fourth senior ready to take on the center position.

Depth is still being built, but that is a strong group of four linemen that should be tough for any defensive line should they stay healthy.

As for the defense, there will be some big hits there as well, but it will still be one of the best in the state even with those departures.

The Warriors will lose Jeremiah Alexander, Tre’Quon Fegans, Jax Van Zandt, Nate Riddle and others, but it’s a side of the ball that gave up just 7.1 points per game last season, posted shutouts in five games and gave up 10 or less points in all but two games.

Even if they give up 10 or 14 points per game this season, that won’t be bad, especially with the way the offense should produce.

And the goal is to post a shutout each week. The Thompson defense hangs its hat on picking up a win even if the offense only scores three points.

That will be the main focus of leaders Peter Woods and Tony Mitchell, who are two of the best defenders in the nation.

Woods will handle the front end of the defense as a lineman going into his fourth year as a starter, and he desperately wants to help lead his team to a title to give him one each year of high school.

He’ll enter the season fresh off a junior campaign that included 90 tackles and close to 30 tackles for loss.

Elijah Williams should also join him as another important lineman up front this season, while several other highly-touted players are battling to determine who will help.

Linebacker will take the biggest hit on the defense, but the return of leaders Seth Hampton and Jake Ivie will help soften the blow.

Replacing Alexander, Van Zandt and Riddle won’t be easy, but those two are leaders who know what to do and will help bring others along. Right now, others are still fighting to prove they deserve a chance to start, but this unit could ultimately be the deepest on the defense by the time the season starts.

Mitchell will highlight the back end of the defense, as the Alabama commit can play anywhere in the secondary as a lockdown cover player and a great open-field tackler who is physical.

Anquon Fegans is also ready to step in to fill a big role this season as another highly-touted recruit going into his sophomore year.

Joining those two will be Kaleb Harris, who the coaches are excited to see at safety because of his physicality as a future Division I player at the collegiate level. Others will need to emerge, but Jaquese Fegans could also be one who ultimately makes a difference for a unit that should be deep.

Prediction (9-1): Thompson may face the most difficult schedule in the state this season with two out-of-state defending champions to start the season, a non-region battle with Class 6A State Champion Clay-Chalkville and the usual gauntlet of Class 7A, Region 3, which Hoover actually won a year ago. The Warriors could very easily lose a game or even a couple of games during the regular season this season, but the season that matters starts in November. The toughest regular-season games are Buford, Clay-Chalkville and Hoover, but they should still be in the driver’s seat for the region title this season, and by the time they get to the postseason, they will again be the favorite to win the state championship. Defensively, they’ll replace some big names, but I’ve heard about the depth of this year’s defense for the last two years and don’t expect much drop off. The offense is where the bigger concern will come, but still expect them to be around 40 points per game. This team is too well coached to think the Warriors will do anything but compete for a fourth state championship in a row.