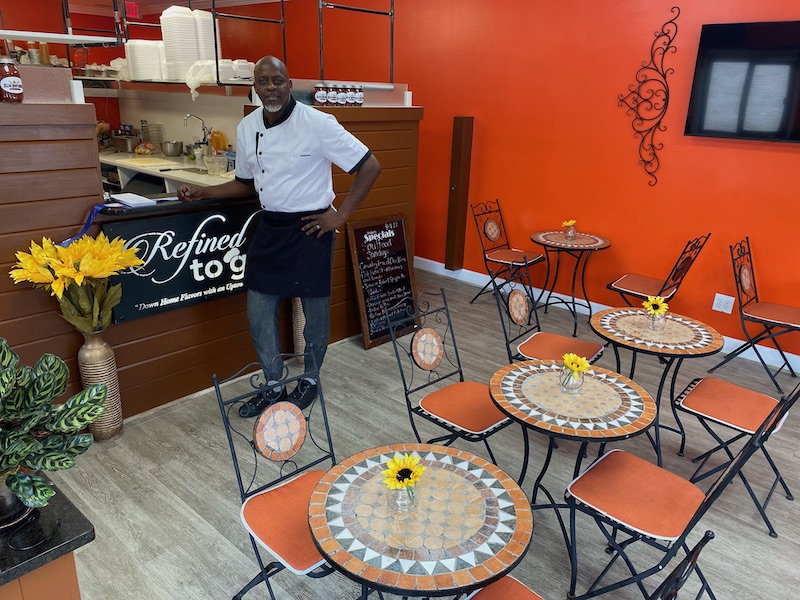 Helena’s Refined To Go has moved to the former Beignets & Lattes space on Co Rd 58 next to Zou’s Kitchen. (Reporter Photo/Michelle Love)

HELENA – Fans of Helena’s Refined To Go will be thrilled to know there is now more space to enjoy the recipes of owner and chef James Washington. The business recently moved locations to the former Beignets & Lattes spot located almost next door to Refined’s old location.

Washington learned about the spot’s availability from his social media manager. Once he found out about the location being available, Washington’s wife encouraged him to make the move. In typical chef form, he invited the realtor to the restaurant for lunch.

“When he was done, he said, ‘This is the best meal I’ve ever had in my life, you’re going to do great in that spot,’” Washington said.

There were three other people in line for the space, but the owner of the building adamantly wanted Refined To Go to be the winning candidate.

The restaurant opened to the public in the new location on Friday, July 22. Fans of Beignets & Lattes may remember the layout of the space. The inside seats approximately 24 people while the outside seats four. Washington said at his previous space, the outside seating would “lose to the elements” where patrons wouldn’t eat if it was raining, too hot or too cold. He added it’s also a wonderful feeling to “be able to turn the key into your own space,” as he had to share the previous location with another person.

Washington said the reception of the community has been great.

“People used to call all the time and ask if we have indoor seating, and now we’re able to say yes,” he said. “A lot of people on Facebook are saying they love how close we are and the buzz is definitely out.”

The Refined To Go menu will stay the same with 14 items on the menu that are all cooked to order. Washington said he particularly loves Sundays as that’s when he gets to pay homage to his roots.

“On Sundays, you get what I was raised with which was everything from turnip greens, potato salad, mac and cheese, braised ox tails, all the things I had as a child that molded me into the man I am now. You can’t forget your roots,” he said.

For future endeavors, Washington said he hopes to start doing cooking classes to give people the chance to learn simple techniques like how to sear fish or sauté vegetables. He also hopes to begin implementing the chef’s table where he offers a three or four course meal with wine pairings. He’s currently working on getting a beer and wine license so he can offer “Lazy Sunday” mimosas, and people are also welcome to rent the building out for special events and catering.

Refined To Go is now located at 1915 Co Rd 58 next to Zou’s Kitchen. For more information, visit Refinedtogo.com.