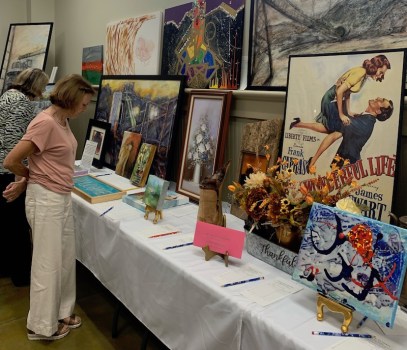 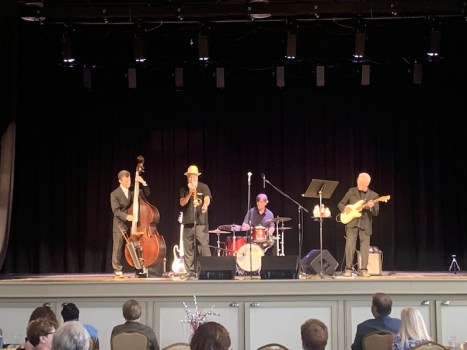 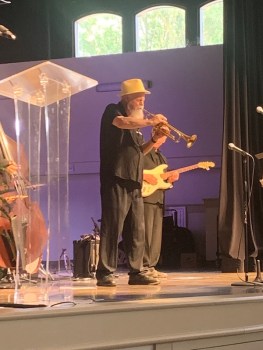 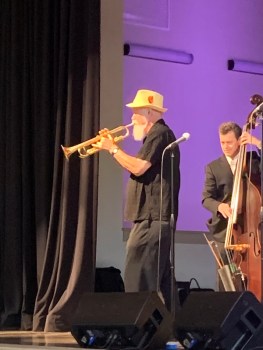 COLUMBIANA – Each year, the three Federated Women’s Clubs of Columbiana join forces to raise money for the Shelby County Arts Council. This year the Novellas steered the annual Celebration of the Arts Luncheon with support from the Vignettes and the Culture Club on Saturday, Aug. 13. The celebration brought just a little bit of the Big Easy to the county seat with a spirited New Orleans-themed program.

The Louisiana-style fair, a salad and spicy gumbo made by the Fish Market warmed up the palate of supporters and then was immediately cooled down by caramel cheesecake topped with caramel corn and peanuts.

The NOLA theme carried through to the special entertainment for the afternoon as well, when well-known local trumpet player, Chuck King, and his band took the stage once lunch was served.

Chuck and his band created a set that showcased authentic New Orleans style and interaction with the audience. Occasional sing-alongs and dancing broke out, and the crowd had a great time through the course of the meal.

In addition to the dinner, the clubs hosted supporting fundraisers including a drawing for a special quilt, a silent auction, a pottery sale put on by the pottery collective and the sale of extra cheesecakes.

Kim Orsen of the Pottery Collective said the Collective loves to support this event each year.

“This event is a wonderful opportunity to enjoy the work we’ve been given to do,” Orsen said. “Thanks to the Arts Council we never stop learning, and we get to connect to a craft that has been around for a millennium.”

The estate sale portion of the fundraiser boasted original paintings by the late artist Joanne Fogle of Homewood. Her large paintings had previously been part of a large estate and were given to the clubs for auction.

There was also a special fundraiser to sell a quilt that had belonged to the locally famous and dearly loved Dottie Bearden before she passed.

During the program, Executive Director Bruce Andrews took the opportunity to honor longtime supporter of the council Edna Sealey Booker, who has taught at the organization for years. He went on to tell his guests that their support helped the Arts Council continue its mission to imagine, create and inspire their community.

“Imagination is the catalyst for all the rest,” Andrews said. “The arts bring order out of chaos and beauty from ashes.”

Andrews mentioned how much it meant to him and his staff to be able to receive the gift that this event has become for them.

“It’s so nice to have them come alongside and do it for us each year,” Andrews said. “This one is one we just get to enjoy like everyone else and that means something to us.”

Pam Johnson, the head of the luncheon committee felt like the event was a great success.

She summed up their mission when she said, “We feel like the arts is a vital part of our community and we know, at the end of the day, that when we support the arts, we are supporting the children in the area.”