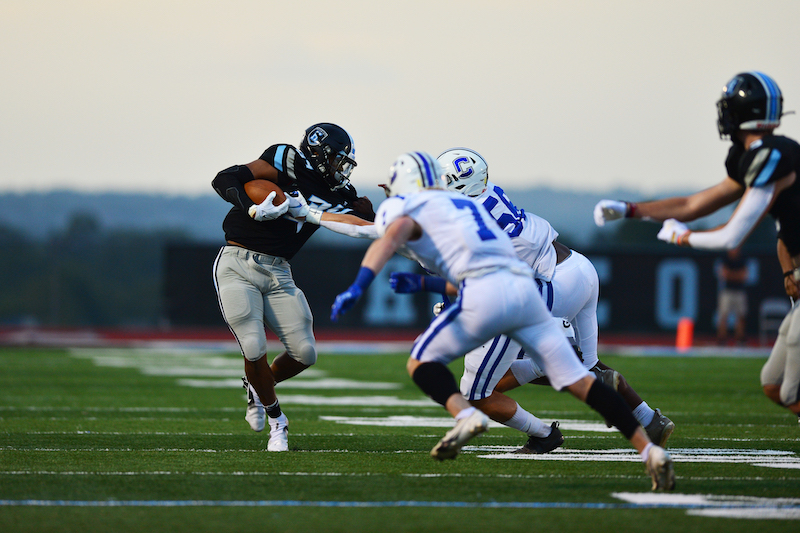 The Chelsea Hornets and Helena Huskies will take part in the county’s first game of the season, as the two travel to Montgomery to compete in the AHSAA Kick Off Classic for this week’s Game of the Week. (File)

This year’s first Game of the Week will take place outside of the county with former Class 6A county rivals Chelsea and Helena traveling to Montgomery on Thursday night to take part in the AHSAA’s Kick Off Classic at the Cramton Bowl.

This season, the matchup will mark the first for Chelsea as a 7A team, giving them a technical classification advantage over Helena. But with Chelsea one of the smallest 7A schools and Helena the largest 6A school, that margin is slim.

Last year, Helena jumped out to a 20-0 halftime lead, but Chelsea drew back to within six early in the second half and had a chance at the lead in the fourth quarter.

The Huskies, however, got the ball back and scored late to put the game away for a 27-14 win. This season, Helena enters as a contender to repeat as region champs, while Chelsea starts a new era in 7A under first-year head coach Todd Cassity.

Both teams need this game badly for momentum moving forward, but especially with so many question marks at different positions. Chelsea will hope to pick up a win and get a boost heading into the daunting task of Region 3 in the 7A classification, while Helena has several new faces at most key positions aside from running back.

That, however, is where the difference likely comes.

Chelsea will have little experience back on the defensive line, which is a concern against a Helena team that has three powerful running backs returning this season, including Jordan Washington, who ran for 1,600-plus yards last year, as well as plenty of talent on the offensive line.

The Hornets do have the pieces to keep this one close with each of the last five decided by 13 or less, but ultimately, Helena’s run game will be what makes the difference late. Helena 31, Chelsea 24