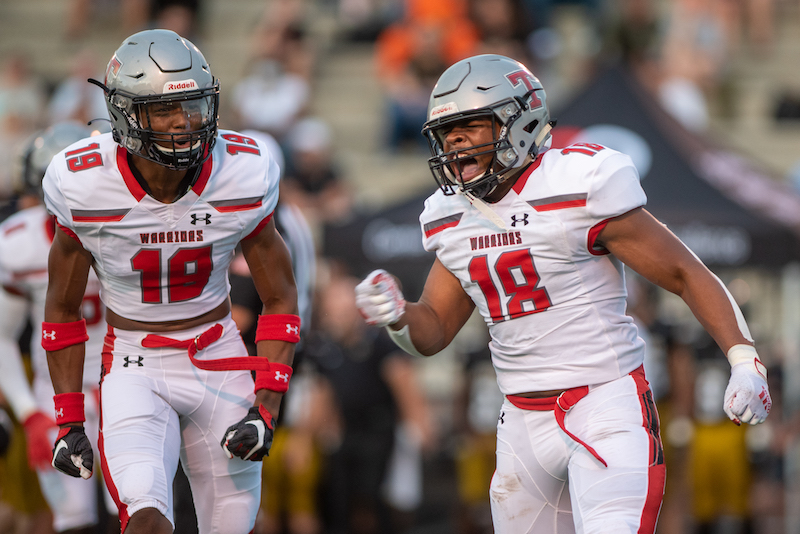 The moment we have been waiting for is finally here—the 2022 high school football season kicks off this week.

It couldn’t be a more exciting way to start the season either. We’ll get to start with a Thursday-night game in Montgomery, then we’ll have one nationally-ranked matchup and one top-five Class 6A battle.

Those are just a few games highlighting an exciting week of high school football locally, as each team starts a new journey with hopes of a special ending in three months.

It doesn’t get any more exciting than this to start the season. Two teams who have won three straight state championships in their respective state both ranked inside the top 20 of every major high school football poll looking to start with a bang. With both entering the season looking for a fourth straight title, an emphasis will be placed on this game because the winner is definitely in line to make that happen. Regardless of the outcome, seeing future Division I college football players all over the field makes this one intriguing enough. Both sides have several already committed to major programs, but the real question is how the ones flying under the radar come out to prove themselves. Those players will likely make the difference. Both do lose key starters, but both have players ready to step in and fill big roles. For Thompson, they will have new faces at quarterback, running back and receiver, while the Warriors will also lose four very key defenders. Eventually, the newcomers will shine, but that is a lot of production to replace in game one against one of the best teams in the country. Thompson does love to prove people wrong as an underdog, and they’ll have a chance to make a big statement in game one if they can pull it off. Don’t worry, though, if they lose, the Warriors could very easily reel off nine wins in a row the rest of the way because they won’t be an underdog again. Thompson 28, Buford 31

If you’re just searching for a game to go to on the opening Friday night of the season, this would be a good option to circle. Spain Park enters year one of the Tim Vakakes era, while Calera is headed into the second year under Jason Hamlin after a remarkable first year a season ago. Hamlin is also a former Spain park assistant, which adds even more to this one for him personally. Aside from that, both teams return loads of talent from last year. Calera is going to be extremely good at the 6A level this year with very few missing pieces, while Spain Park should be drastically improved. I honestly think this game could go either way, and it largely depends on how quickly Spain Park’s players have learned to adjust under a new head coach. The classification and home field advantage aspect is the only difference going into the game. Spain Park 28, Calera 21

For the first time in five years, Oak Mountain will enter a season without star athlete Evan Smith. That, however, brings a lot of anticipation with Will O’Dell stepping into the quarterback role with a new style of play. This game feels like the perfect test for him and the offense to build some confidence, but it’s the defense that will make the difference. Oak Mountain should be sound on that side of the ball again this year, and I expect that to be a huge plus early in the season as both of these offenses try to get in a flow. Oak Mountain 24, Northridge 14

One of the biggest games during a strong opening week, this one won’t have any region implications, but it sure will have state championship implications. Both of these teams enter the season ranked inside the top five in the 6A classification. More than that, Clay-Chalkville won last year’s state championship and beat Briarwood 56-21 in the second round en route to that title. This year, however, is a new year and 5-star Briarwood quarterback Christopher Vizzina leads a special senior class ready to make a statement. That said, the Lions do have some key holes to fill, and to make up 35 points against a team that averaged 48.5 and gave up 15.9 last year, that seems like a big leap to make in game one. By the end of the season, however, that could be a different story. Expect this one to be a physical and entertaining game. Briarwood 28, Clay-Chalkville 35

There may not be more unknown surrounding a game than this one. Both lost very experienced head coaches at the end of last season. Now, Pelham enters year one under Mike Vickery, while Jackson-Olin has first-year head coach Jamaal Bess leading the way. Even though he’ll have a quarterback to replace and a few other key players, Vickery should be able to benefit from an experienced group of athletes early in the season. Last year’s defense gave up 18.8 points per game and returns enough players to be solid again this year, which should make the difference. As long as the Panthers have bought in over the last few weeks, they should start Vickery’s tenure with a win at home. Pelham 27, Jackson-Olin 20

Fresh off two straight playoff appearances and a finish of second in the region last year, the Shelby County Wildcats enter the 2022 season as confident as they have been in years. This year’s team will replace a few key players, but they also have back as much talent as they’ve had in a while and should be even more physical and athletic. They are 5-13-1 against West Blocton all-time, but the two haven’t met since 1999. The Wildcats now have a classification advantage and the Tigers have finished no better than 6-5 in Class 4A the last seven seasons. If it is going to be another successful season for the Wildcats, they’ll take care of business in this one. Shelby County 31, West Blocton 24

In the first meeting between the two since 1957, the Vincent Yellow Jackets will look to kick off the 2022 season with a victory against Ragland. The Jackets will have a classification advantage, but Ragland is a team that typically is solid in the regular season and is coming off a 9-3 year a season ago. That said, I am a believer in Vincent putting together its best season in a while this season because of the talent back at just about every position. The Yellow Jackets should get off to a promising start. Vincent 42, Ragland 35

This game should provide the perfect opportunity for Cornerstone to start the 2022 season with a victory. The Chargers won this game 67-12 last year and Snook finished the season 1-8. Cornerstone returns some key players, and while the Chargers are still young, they should be able to pick up a win in game one. Cornerstone 42, Snook 20

This will mark game two for the Evangel Lightning, and it should provide a good opportunity at a 2-0 record. Evangel won this game 56-0 a season ago, and with more returning talent this season, expect the Lightning to put together another big showing. Evangel 49, Meadowview 13