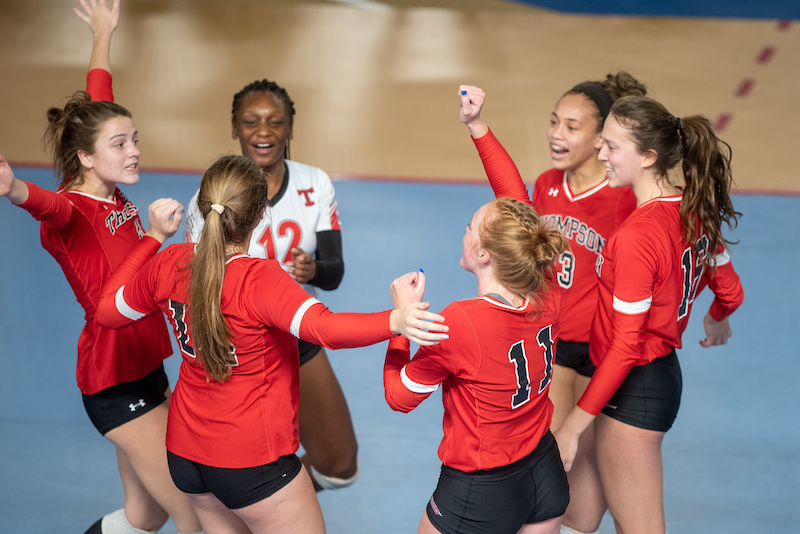 Following a devastating loss at the state semifinals and the graduation of eight of their crucial team members, Thompson looks as this upcoming season as an opportunity for drastic changes. (File)

The Warriors held a 2-1 set advantage in the state semifinals, eventually leading to the team becoming the state runner-up in a five-set thriller. Unfortunately, they fell short in the final frame to bring the season to an end.

With a second consecutive appearance in the Final Four under their belt and the team’s third straight chance in the state tournament, it was a special end to the season for the 2022 seniors who worked toward multiple All-State and All-County selections.

This led to many of the graduating players earning scholarships to play for collegiate level teams, but it created a devastating loss for the Warriors.

“We lost a lot. Not only just in their abilities to play volleyball, but that senior class led in so many ways,” Green said.

Green discussed how many of the team’s underclassmen were overshadowed by eight talented seniors who led the Warriors for the past four seasons. Now, she says it is their time to rise and shine.

While most coaches would consider a season like this a rebuilding year after losing many of their seniors, Green considers this as a reloading year for the fast-approaching new season.

“The greatest teacher for this group throughout the summer was gaining experience and playing with one another,” Green noted when describing the Warrior’s preparation for the fall.

Eight years into her tenure at Thompson, Green is not short on cultivating talent. The program’s past junior varsity squads have gone on to win multiple metro championships in the past several years. Both the coaches and players are continuing that winning culture mentality despite the turnover.

The most crucial part of the training process for Green’s teams was developing the team’s relationships this past spring. When describing this season’s varsity squad, Green said that it is probably the most flexible team she has had.

“We’ve got multiple pieces that can play in a lot of different places,” she said.

Although the team took a huge blow losing eight key players, some returning faces of the program are seniors Kaitlyn Grant, Hannah Fincher and Cydney Mitchell. Grant made the All-County first team last year despite being injured, while Fincher is described as an even-keeled player who not only possesses skill at the net, but also returns as one of the Warriors’ more skilled servers. Mitchell, who is one of the team’s leaders, has accepted a scholarship to Mississippi College and Green said she has had a good offseason.

Despite the loss of All-State setter Madison Touhey, Green is excited about the possibilities of Emilia Grey and Olivia Kelly.

“I️ don’t think we’re going to skip a beat when it comes to setting, which is a wonderful gift,” Green said.

In addition to that boost, several players are coming back to the program after taking time off, which Green hopes will give them a boost. Abby Faith Campbell is expected to be a key component for the Thompson defense as she will be the starting libero this year.

“We believe that it’s special to play for your school and your community and you only have so many years to do that,” says Green. “I’m so thankful that Olivia and Abby Faith felt that the door was open for them to come back and be able to experience that again—and they’re thriving.”

Aside from the new players joining the program, they had the opportunity to learn from Simeon Castille with an offseason program.

“We got the privilege to hire Simeon Castille to work with our girls in the offseason,” says Green. “Best thing that ever happened to us. His program was about becoming the best athlete you can be and I’ve seen a transformation in all our kids.”

With many changes and alterations to the way the Thompson has run their team, the Warriors still remain amongst Alabama’s elite clubs. Thompson will start their season against the Oxford Yellow Jackets on Thursday, Aug. 18 at home.