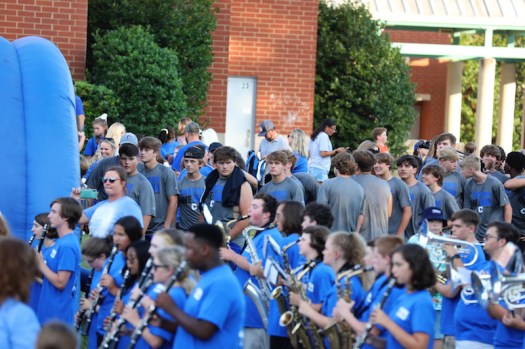 The Chelsea Hornet Quarterback Club saw a huge turnout at its first community pep rally on Friday, Aug. 12 at Chelsea High School. (For the Reporter/Cari Dean) 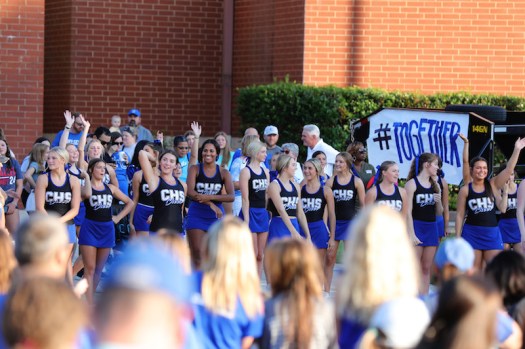 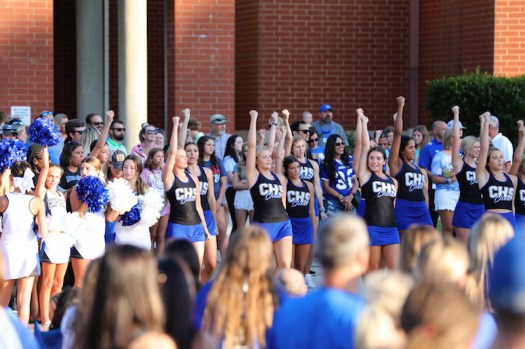 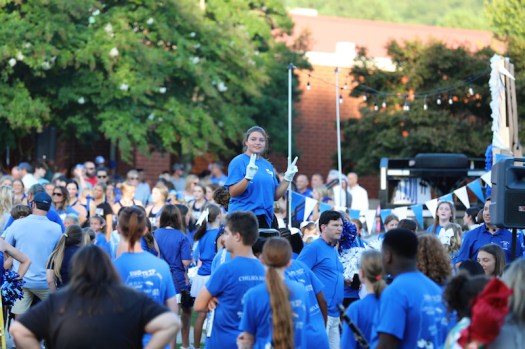 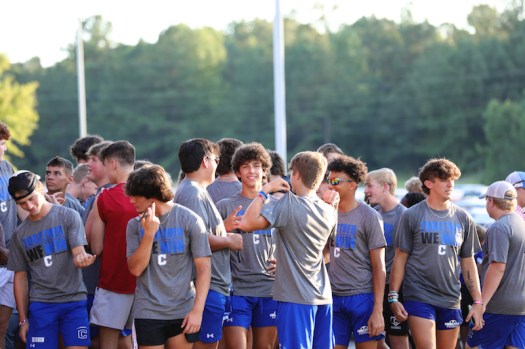 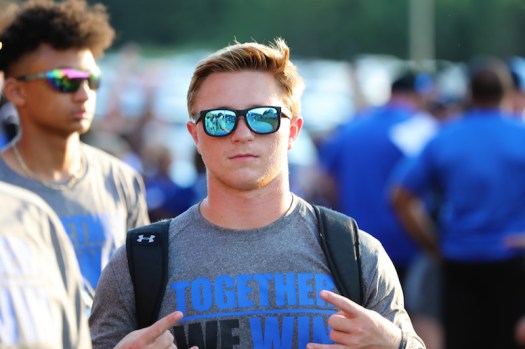 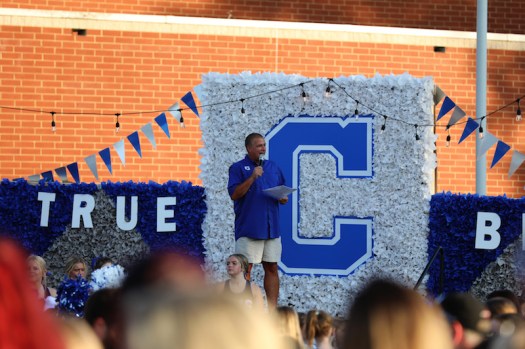 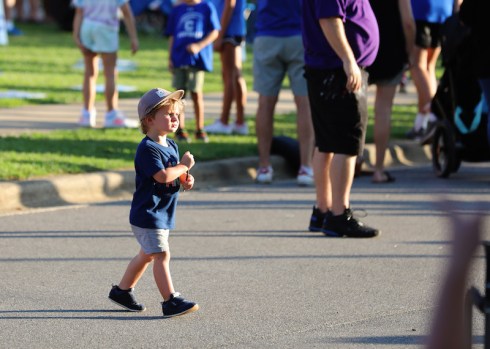 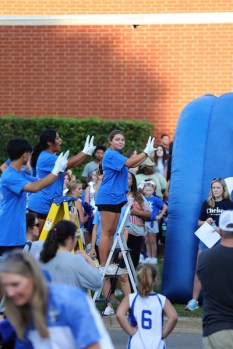 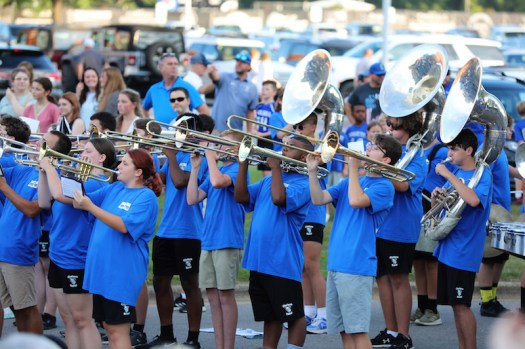 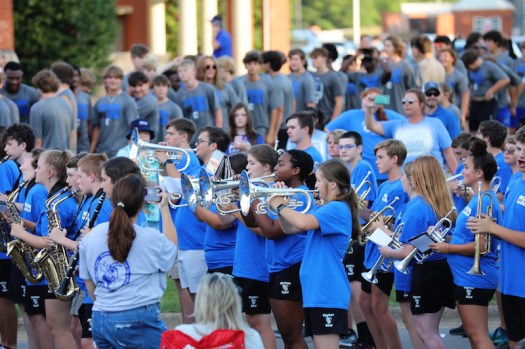 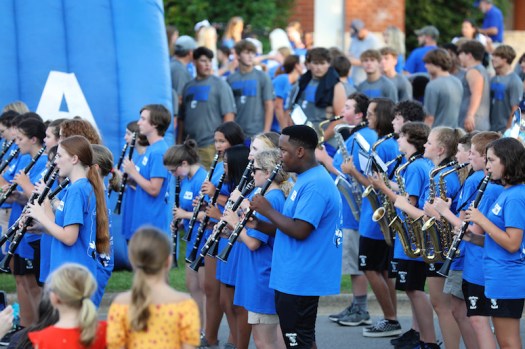 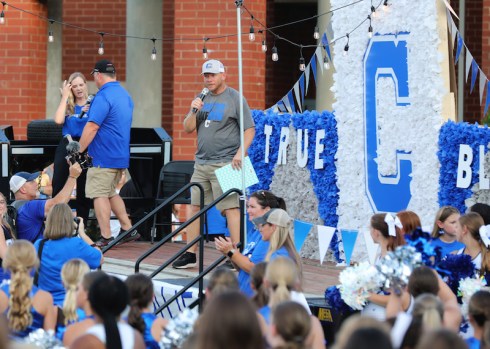 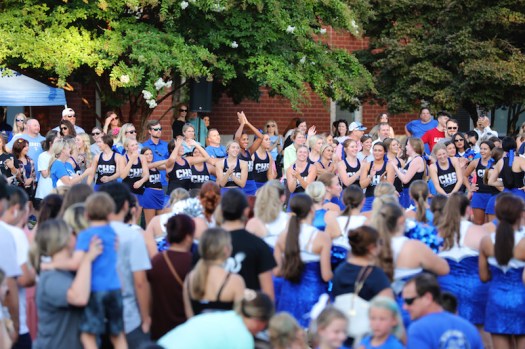 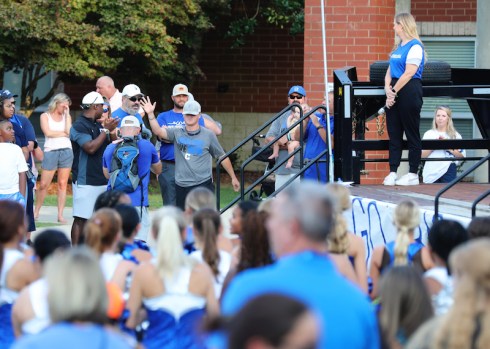 CHELSEA – Chelsea High School was swarming with activity as local families gathered for a spirit-filled event ahead of the 2022 football season.

The Chelsea Hornet Quarterback Club’s first community pep rally drew hundreds of people—many of whom were donning their Chelsea blue attire—to the campus on Friday, Aug. 12 to cheer for the Hornets as they prepare to compete in the 7A classification this year.

“The community just really turned out, and we were so proud of that,” Quarterback Club Communications Coordinator Heather Brooks said. “We’ve gotten tons of positive feedback. This is hopefully going to be a yearly tradition.”

Although attendance was hard to track, Brooks estimated that nearly 1,000 people attended the pep rally, where the high school football team was recognized, along with the city’s middle school and youth club football teams.

“Part of building our program is making sure our pipeline is really starting to establish itself,” Brooks said. “We wanted to celebrate those little boys and give them a glimpse of what it’s like to be in high school.”

CHHS head coach Todd Cassity introduced his assistant coaches before calling up the high school varsity and junior varsity players to the stage.

Chelsea’s marching band and cheerleaders also performed at the pep rally, and attendees had access to a variety of food trucks, kids’ zone activities and booths for the school’s other athletic programs.

“The Quarterback Club planned it, but we also wanted to bring in other school organizations,” Brooks said. “We gave them an opportunity to showcase their athletes and do some fundraising. It was a partnership across the board, and I think that’s what made it so much fun.”

In recent months, the Quarterback Club has spearheaded fundraising efforts for a football locker room renovation project at CHHS.

Several days after the pep rally, the club surprised the football players with a reveal of the initial facility upgrades, including new paint and wall wraps in the hallways.

Brooks said construction on the locker room is scheduled to start in the next month.

The project is one of many things the Quarterback Club has raised money for this year.

“We’re covering coaches’ stipends, we bought a new drone to help with practice and team meals are covered,” Brooks said. “The community has been great. We’re able to do these things because they’re supporting us so well.”

Brooks said one of the next big goals will be to purchase new uniforms for the football players.

Another upgrade for the team and community as a whole is the installation of turf and a competition track at the CHHS football stadium.

The project, which is being funded by the city of Chelsea, city of Westover and Shelby County, is expected to wrap up in September.

“I think we had more in attendance there than we have at some of our large football games,” Brooks said. “I just think that shows the community support about what we’re trying to do to build our football program.”

The Hornets will start the season against Helena in the AHSAA Kickoff Classic at the Cramton Bowl in Montgomery on Thursday, Aug. 18.