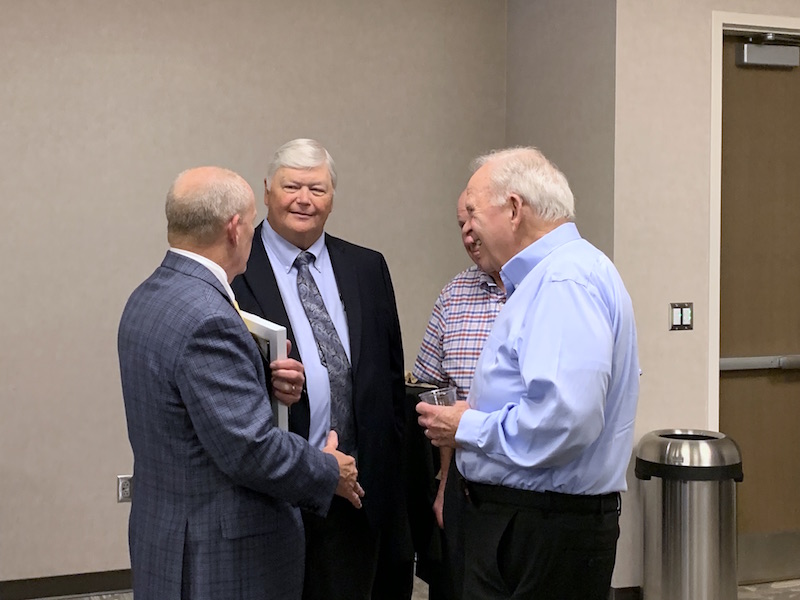 Shelby County Engineer Randy Cole, second from left, speaks to colleagues and friends at a retirement party held for him on Thursday, Aug. 11 at the Shelby County Services Building on U.S. 280. (Reporter Photo/Emily Sparacino)

NORTH SHELBY – Shelby County Engineer Randy Cole has traversed thousands of miles of roads in his three decades with the county’s Highway Department.

Starting Sept. 1, Cole will travel the same roads at a more leisurely pace—and on his own time.

After 31 years of service, Cole is retiring from his position as county engineer, a role in which he has overseen more than 1,000 miles of roadway and 280 bridges across the county’s 808 square miles.

Cole has managed an engineering staff comprised of licensed professional engineers, certified bridge inspectors, a road department with about 90 employees and an annual budget of nearly $19 million.

“This has never been a job for Randy Cole,” said Sonny Brasfield, executive director of the Association of County Commissions of Alabama. “It has always been his mission to take care of transportation in the fastest-growing, most demanding county in Alabama.”

Cole started working with Shelby County in 1991, when the county was facing financial challenges that ultimately affected every department.

State Rep. Arnold Mooney presented Cole with a resolution from the Shelby County Legislative Delegation commending him for his service.

“He’s done an outstanding job with this county,” Ellis said. “I’m proud of what he’s done, and I’m proud of him as a person.”

While speaking about Cole’s dedication to serving others, County Commissioner Kevin Morris referenced scripture that reads in part, “For even the Son of Man did not come to be served, but to serve, and to give his life as a ransom for many.”

“Randy Cole, you’ve been a man of service to this county,” Morris said. “We appreciate that.”

Cole said he was able to do his job because of the people around him—his coworkers, the members of the Shelby County Commission and his family.

“I’m very honored and very humbled by the kind things that have been said,” Cole said. “I love you all very much and appreciate you being here. If I can ever do anything for any of you on a personal basis, don’t hesitate to call.”