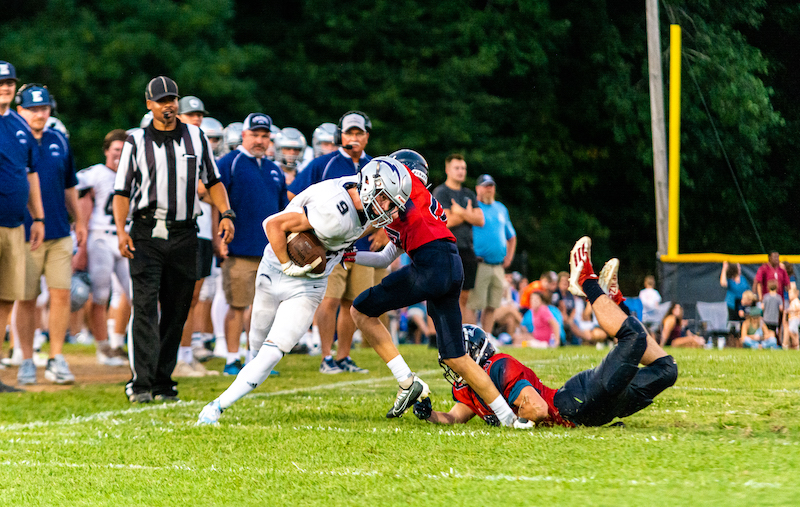 The Evangel Lightning improved to 2-0 on the season and scored 50-plus points for the second week in a row in a shutout of Meadowview on Friday night. (File)

ALABASTER – Aided by three fumbles, Evangel Christian School scored on its first five offensive plays of the game to take a 35-0 lead in the first quarter Friday night. The Lightning went on to cruise to a 55-0 victory over Meadowview Christian.

“We’ll take the win and keep getting better. We have a big one next week. We got to play a lot of young kids tonight. We played all 38, and that’s a good thing to help us for the future,” said ECS Coach Tim Smith.

Grady Watkins knocked the ball loose on the first play of the game, and Shace Green fell on it for the Lightning, four seconds into the game. Eli Whitfield then hit Hunter Atkins for a 24-yard touchdown pass. Six seconds after ECS kicked off, Zane Barlow recovered a fumble at the Meadowview 5, setting up another Whitfield TD pass to Judah Thompson to the right corner of the end zone. Thompson followed with a 32-yard touchdown reception from Will Welch on the Lightning’s next play of the game, making it 21-0 with only 2:31 played. Thompson also recovered a fumble

Atkins added a 45-yard TD run on the fourth play of the game with 6:20 left in the first quarter. As the Lightning continued to strike, the clock rolled.

Tyler Wilson punched in an 18-yard touchdown run to cap the first-quarter scoring, and Whitfield scored on a 38-yard run in the second quarter to lead 42-0 at halftime.

Wilson finished the game 3-of-3 passing for 36 yards and two touchdowns and 38 yards rushing and a touchdown. Thompson led all receivers with 37 yards on two TD catches, while Atkins one carry was the most in the game.

Mason Holland tacked on a 22-yard touchdown run with 4:06 left in the third quarter to extend Evangel’s lead, 48-0, before sophomore Nick Cloud capped the night with a 15-yard pick-six with 2:05 left in the game. It was Cloud’s second pick-six of the season, returning one in the season opener.

Evangel (2-0) will travel south next Friday, Aug.26, to meet Evangel-Montgomery in its season opener.