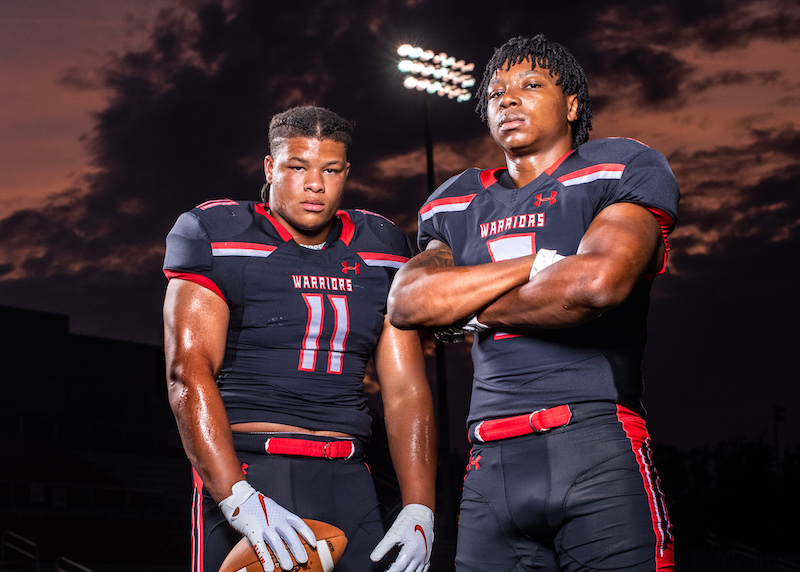 Thompson 5-star defenders Peter Woods and Tony Mitchell are determined to help the Warriors win a fourth consecutive state championship, which would give them one each year of high school. (For the Reporter/Keith McCoy)

When they stepped on the field together as freshmen, neither knew much about the other aside from one similarity—they were two of the best in the country.

The two know it’s going to be an emotional ride, but it’s one last chance for them to prove they are the best out there.

“I’ve been going at this for five offseasons as a Thompson Warrior,” Woods said. “This program means a lot, more than the football. It helped me grow up, taught me to mature. Coach (Woodrow) Briggs helped me grow and become a man. I wouldn’t be where I am without this program. I’m thankful for that. The thought of this being my final season has been driving me all offseason knowing each step of the way is it. It’s my last summer workout, my last OTA, last sprint. It’s making me work harder in every facet.”

That’s a bold statement for a player who is one of the hardest workers on the team, but it’s a sentiment he shares with Mitchell, who also knows this is it alongside his teammates.

“It’s sad being the last year of high school, but I feel like this is going to be my best year, so I just need to go out and leave it all on the table so I don’t have any regrets,” he said. 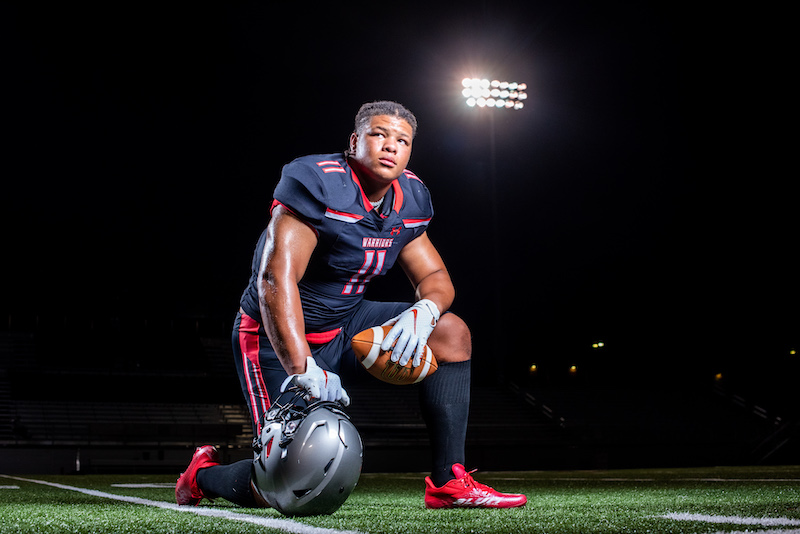 Since they set foot on campus at Thompson High School, Woods and Mitchell have both had the weight of the world on their shoulders.

As two of the highest-rated recruits in the country throughout their high school playing days, greatness has been expected of them since day one.

Neither, however, has felt the pressure outside of their own expectations.

Mitchell added to that, saying it’s similar to any task that comes naturally, like riding a bike.

“There’s no pressure at all,” he said. “It’s just something we’re supposed to do. We have the opportunity to go four in a row, and I think we will.”

Now, they have expectations again, and as leaders of the defense, this year’s pressure may be the most they’ve had as football players.

Not only are they hoping to lead the Warriors to a fourth title in a row, but they’re looking to do so as seniors, which would give them one each year of high school.

In addition to that, they’re two of the best defenders in the country, and they’ll lead Thompson’s defense this season.

It’s a defense that was stellar a season ago, giving up 7.1 points per game with three consecutive shutouts to start the season.

Thompson never gave up more than 24 points in a game last season, gave up 10 or less in 12 of 14 and had five total shutouts.

This year, however, Woods and Mitchell are expected to be leaders of a defense that should be just as good or better.

But both are focused on more than that. Instead, they’re looking to do everything they can to make sure the team isn’t complacent with three state titles in a row.

“We’ve won three in a row,” Woods said. “It’s easy to get satisfied and lose sight of what we’re playing for. I don’t know if anybody has won four state championships in a row. We want to do that, and we have all the tools to do it. We want to execute and work hard.”

That is a message head coach Mark Freeman has instilled in his players for years, and it’s one Woods and Mitchell both know is important heading into the new season. 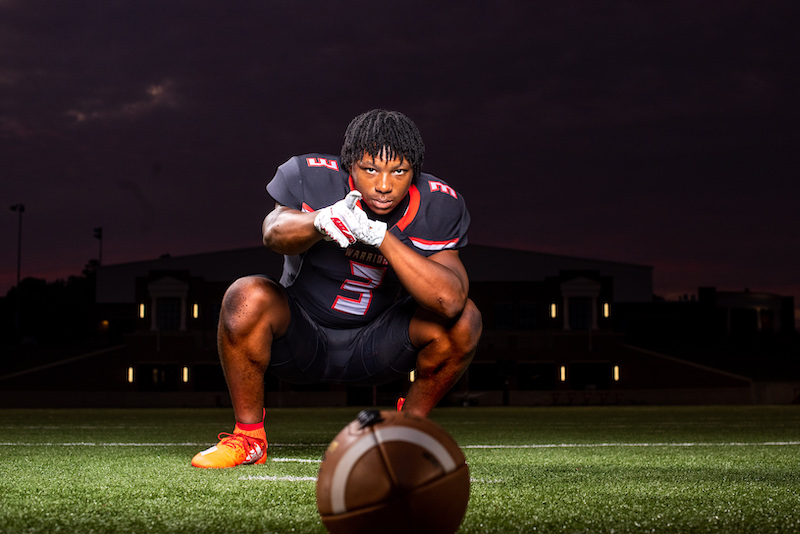 “We have to continue to lead as older players,” Mitchell said. “We have to lead the younger guys and show them the standard about how everything is supposed to go. Don’t get complacent and know what to expect. On defense alone, we try to get a shutout every week. We don’t want anyone to score. We accomplish that by working hard, practicing hard and studying film. All of that helps us know our strengths and weaknesses.”

With their confidence, however, each also knows the challenges that lie ahead and the teams that are gunning for them.

Thompson is already being hunted by every team they face, but now, they’ll also face one of the country’s toughest schedules, including a non-region schedule that includes one in-state state champion and two out-of-state champions.

That’s in addition to a region they didn’t even win last year, despite the state championship, as Hoover claimed the title a season ago.

“We’re nobody’s fool,” Woods said. “We know there is a big target on our back. But that doesn’t scare us, it fuels us. Everybody is practicing to beat us. So our mindset is, ‘What can we do to give our best?’ We’re always thinking about who is working and how hard they’re working to be better than us. We can’t let anyone outwork us at any point during the week.”

Woods said the goal is to get through all of those tests and win a national championship this season, and with the schedule they face, making it through unblemished would likely lead to that distinguished honor.

“We just have to go out there and give 100 percent all the time,” Mitchell said “We’re going to get everybody’s best game, which gives us the chance to prove why we are a top team in the country.” 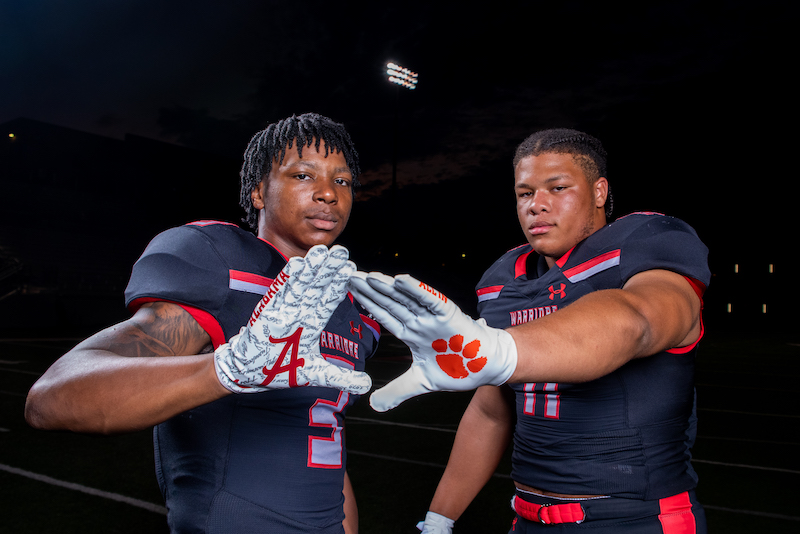 When the two star defenders first stepped on the field together four years ago, neither was too familiar with the other, but they were quickly able to bond, which led to a great friendship over the last four years.

“Tony has been like a brother to me since I got here,” Woods said. “We were both young freshmen together in the same shoes. We just clicked and I was able to learn about him off the field. When we started, it was just Tony Mitchell with all the offers like me, then I got to learn about him.”

As they grew closer off the field, they started gaining more faith and trust in one another on the field as well.

“It’s been a great friendship,” Mitchell said. “Ever since I got here, we’ve been good friends being with each other every day. That bond has come together. We both depend on each other no matter what the situation is. That carries over to the field and is key for us because it makes the entire defense better.”

But as the ride comes to an end, both know it will be emotional as they get near the finish line, so they’re focusing on making sure it’s not a disappointing finish.

“It’s been a great, long journey,” Mitchell said. “Going into my senior year, I want to help the team get a fourth state championship. Four peat and grind each day to get there. That’s the goal. We have to work to get better throughout the season and take it one game at time.”

Woods said the key to that is the team working together to become mentally tough.

As two of the top recruits, Woods and Mitchell have bonded over that mental toughness for years, and now, they’re looking to spread that to their teammates, many of who are also highly-recruited.

“We have a lot of great guys coming back who help us out a lot,” Woods said. “We’ll have a very deep rotation this year. It will probably be the deepest we’ve had. Coach Briggs has done a great job instilling our work ethic and mental side going into that fourth quarter. There comes that time where you meet your match, so what will it be when that time comes that sets us apart, and it’s that mental toughness.” 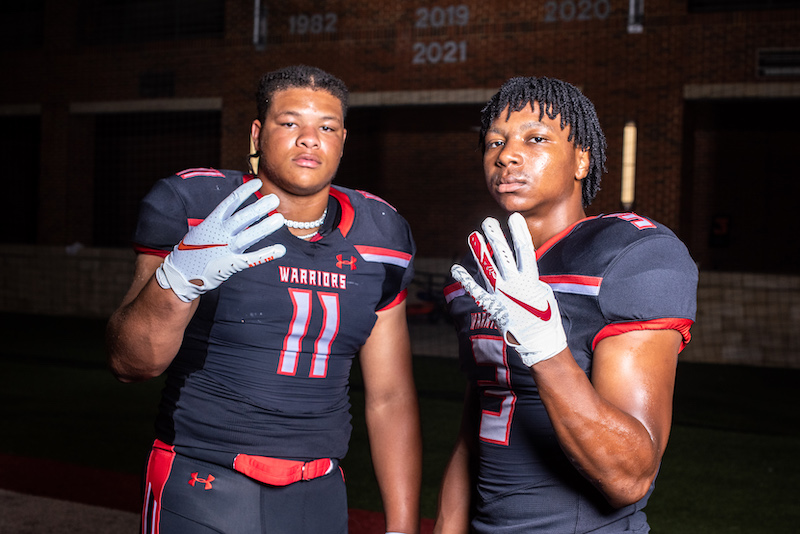 Warriors through and through

Even with the bright and shiny lights that lie ahead in college with Mitchell committed to Alabama and Woods to Clemson, neither has looked that far ahead.

Both committed to their college choice during the summer just a couple weeks apart, and while they’ve given each other some fun jabs about picking different schools, their goal was to get that out of the way so they could focus on one thing—being a Warrior for a few more months.

Now, they’re doing everything in their power to be as successful as they can be this season, which includes visualizing the season and knowing the goals they have.

“Every time I’m on the field, I feel like I’m the best out there,” Mitchell said. “Whoever is in front of me, I just feel like I’m going to win, I just have that dog mentality.”

He added that one of his main goals is to find a way to the ball more this season so he can get more interceptions, but he knows defenses shy away from him because of his talent, which disappoints him because he wants the challenge of proving he’s the best.

As for Woods, his mindset is clear every time he is on the field.

He knows double teams are likely going to be there early in the season, but his mindset keeps that from being an issue.

“When I’m on the field, my mind is clear,” he said. “If you can imagine an open grass field with sunlight, that’s what it’s like. I analyze things before everybody gets to the line. I’m not big on pre-play talking, I’m thinking about analyzing.”

He also said that he has complete faith in his teammates, and if a double team comes, opponents better beware of what others can do.

It’s unclear what the 2022 season will hold for the Thompson Warriors, but Woods and Mitchell aren’t scared of the challenge that lies ahead, and neither will be satisfied with anything less than history in December.