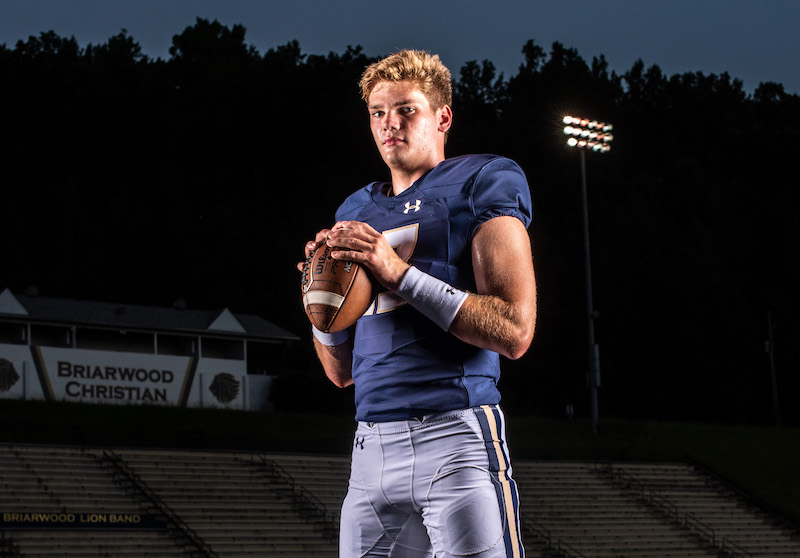 A four-year starter, Briarwood quarterback Christopher Vizzina is ready to lead the Lions during his final season. (For the Reporter/Keith McCoy)

Entering his freshman season at Briarwood Christian School, he just wanted the coaches to think he was good enough to dress out with the varsity team. Now, he’s one of the hottest commodities in high school football.

Heading into his senior season with the Lions, Christopher Vizzina has transformed into a 5-star recruit committed to play college football for the Clemson Tigers. But he’ll be the first to tell you, he didn’t see it coming.

“I didn’t even want to be a quarterback,” Vizzina said, laughing as he reminisced. “Everyone wanted me to, but I didn’t. I was playing receiver and wanted to score the touchdowns, but in eighth grade, halfway through the season, I had to move to quarterback and ended up really liking it.”

Now, he heads into his fourth-and-final year as the starting quarterback at Briarwood hoping to end a special run with his senior classmates.

The last two years, he has combined for 4,216 passing yards, 803 rushing yards and 48 total touchdowns.

But now, with the group he grew up playing with, he’s expecting his best year yet. 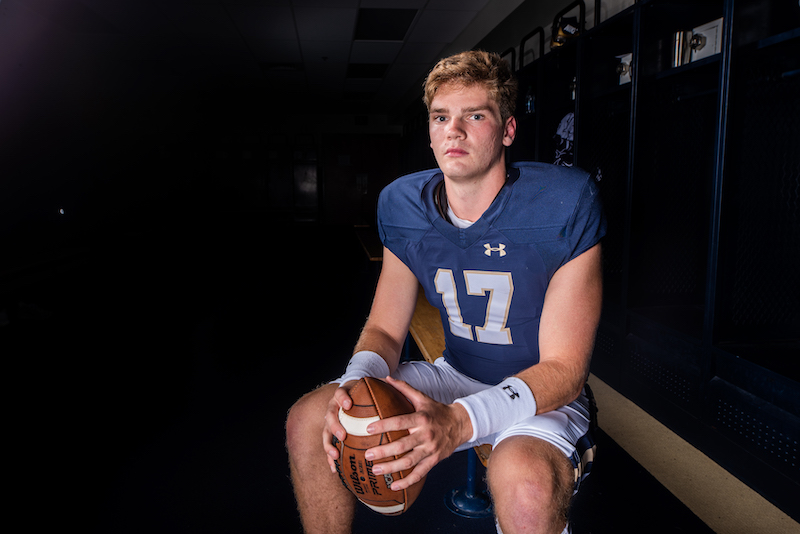 A lifelong student at Briarwood Christian School, Vizzina has formed close connections with his teammates and the coaching staff, many of who have been there throughout the ride.

“I’ve been at Briarwood my whole life, so going in grade school and getting to know the coaches long before playing really helped me along the way,” he said. “There were always there for me, and that grew even more as I got to high school.”

But going into high school, he had still only started four games in eighth grade and Vizzina didn’t know what to expect. He did, however, fall in love with the game at that point and knew he wanted to be the guy.

Entering his freshman season, he had the goal of being on the varsity roster and dressing out for games. He eventually achieved that goal, but he didn’t want to settle for that, he wanted to be the starter.

“Even as a freshman, I wanted to be the guy,” he said. “I had someone in front of me on the depth chart though, so I had to be patient.”

Eventually, starting quarterback Jonah Carroll went down with an injury, which forced the young freshman to step up.

“I had to figure out how to lead and how to do that type of stuff with people who were older than me,” he said. “That was a challenge, but the coaches helped me, and looking back on that now, it’s something that not only helped me on the field, but off the field. That is something I will always need.”

That season also marked the first under new head coach Matthew Forester, who had the task of replacing 28-year veteran Fred Yancey.

With the pressure of a successful first season, Forester didn’t hesitate bringing Vizzina in as the backup because of the work ethic he showed.

“He’s a guy who has worked really, really hard,” Forester said. “To go from being a guy who played four games in junior high to now being one of the highest-ranked quarterbacks in the nation, yeah, there’s natural talent and an aptitude for the position, but his work ethic is incredibly special. That’s what sets him apart. To go from where he was to competing in events like the Elite 11, that’s not just showing up and doing what I asked, that’s putting in extra time and being fully committed.”

Not only did he succeed, he helped lead the Lions to a 12-2 season and a spot in the semifinals of the Class 5A playoffs.

From there, everything took off, but his focus remained on the team and his teammates.

Heading into his sophomore season, Vizzina not only was still being forced to lead a group of older players and compete against older players, he was now tasked with leading Briarwood down the path of a 6A schedule—something the Lions struggled with a few years earlier.

For Vizzina, it was no problem.

“I had great guys and teammates around me that year,” he said. “I was able to just keep learning.”

Forester also saw him start to take command and really begin to blossom as someone who could be special.

“It has been fun to watch the evolution his game has taken,” Forester said. “At 14 years old, he’s playing against the No. 1 team and our goal was to protect him and take shots when we could. But sophomore year, we opened up the offense and he took command. It quickly turned into an offense designed to fit him and his skillset.” 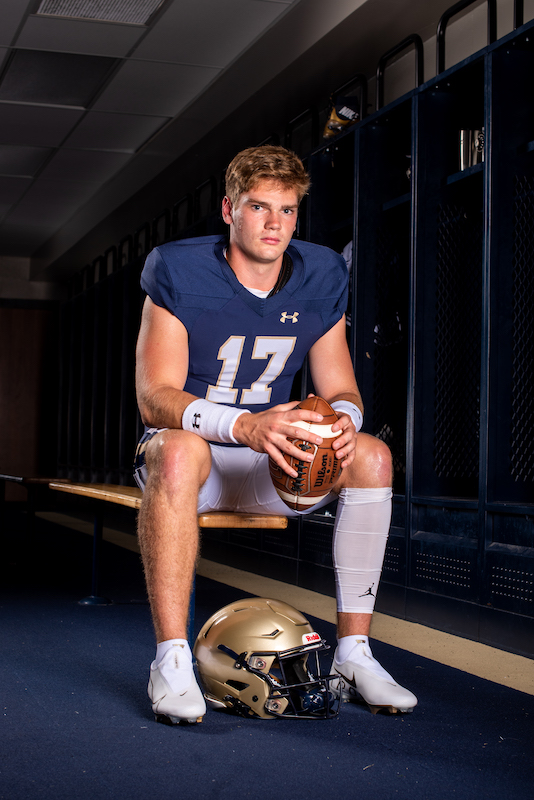 That’s when Forester and Vizzina both realized what could be ahead for Vizzina, so they started to push hard.

“After sophomore year is when I decided I wanted to work to play at the next level,” Vizzina said. “My potential showed it, so I took it upon myself along with help of coach Forrester and others. I started putting film out there and started going to camps. My size helped and my sophomore film people thought was advanced to my age, so I started to pick up offers.”

As he moved into his junior year, which is the big recruiting year, he was able to build off of that and showcase even more of what he was capable of as the quarterback of the Lions.

With several offers already, that’s when his recruiting started to blow up. He became a 4-star quarterback throughout the season and most of the major college football programs in the country came calling.

“It was my favorite season so far,” Vizzina said. “I felt like I had an edge on a lot of people, which made the game fun, but also lead to opportunities. The coaches then helped guide me through all of the chaos and attention that transpired.”

Leading into the season, he was competing with some of the other top high school recruits in the country and went toe-to-toe with top recruit Arch Manning during one camp.

College coaches started marveling over his ability, his arm and his size. Then, with the start he had to his junior season, they wanted him.

It led to a chaotic next year of recruiting that featured many ups and downs.

As his recruiting grew, so did his following. Vizzina became one of the top quarterbacks in the country and with most top teams gunning for him, the fan bases followed suit.

His social media following grew tremendously, which led to many sharing their thoughts on where he should go, some more friendly than others, especially after he officially announced on April 12 that he was committing to Clemson.

“You have to think about it a certain way,” Vizzina said. “You can see all the random things being said about you, but that just motivates me really. People don’t really know me and it honestly doesn’t hurt me.

Vizzina said the reason he was able to block out the hatred that came along with his announcement was because of his faith.

He said he has always leaned on his faith to get him to where he is in life.

“Through all of that, I had to learn, this isn’t what makes me what I am,” he said. “Christ is what I play for and what means most to me. Blocking out the noise is so important. This year is the first year I’ve been hated on so learning to deal with that was challenging. Some telling you you’re the greatest thing ever and others hating you because you’re going to other schools. I just had to learn to handle the spotlight and lean on others to help me because it’s not something you have experience with until it happens. But as soon as I get in the locker room with my teammates, I forget about how many followers I have, and it becomes about each of us.”

Ultimately, his faith and that family feel was what he saw in Clemson that made it the right choice for him even as an SEC fan growing up.

“I was recruited by almost every big school in the country, and all the in-state schools and SEC schools. I went to every school, and really, for me and who I am, it felt like Clemson was the right fit for me on and off the field,” he said. “I want to go somewhere where I can compete for a national championship with a coaching staff that will develop me on off the field and in my faith. Clemson was one of the only schools I would leave the SEC for as someone who grew up in the south. It was the perfect fit for who I am.” 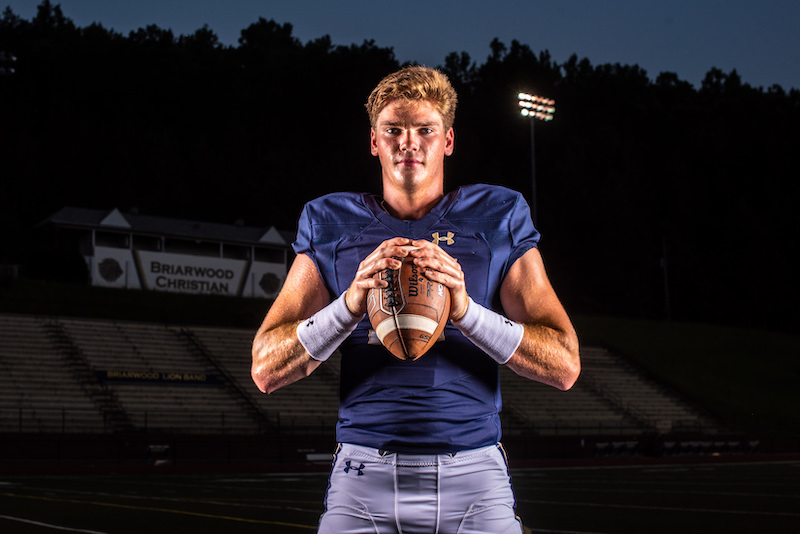 Eye of the Lion

While he’ll soon have the eye of the Tiger when he joins Clemson University and Dabo Swinney, Vizzina is solely focused on this one last season with the players he grew up playing with.

“I’m super excited about Clemson and it’s a blessing I’ll get to play college football, but I want everyone to know, Briarwood football is my number one priority right now,” he said. “I’m playing for my friends, my coaches and the program. I get to play with my best friends and the guys I grew up playing with. To play on Friday nights and lay it out with those guys is what it’s all about.”

That is also a moment Forester has been waiting for the last three years, knowing it could be a special season when he gets to play with the guys he is closest with.

“He’s always played with the older kids, and I’ve always been interested to see what happens when the guys are the same age in the locker room and the senior class gets to gel together. It’s incredibly special to watch the locker room and see how much he enjoys being with them and how much they enjoy being with him. He has never set himself apart. That is his group of guys and he is incredibly excited to play his senior season with his best friends.”

Vizzina said he thinks it can be a special season with the players they have, and with some new tweaks on offense, he feels like it will be his best year yet.

“We have to find what we’re best at,” he said. “You find that out in fall camp and in the first couple of games of the season. There will be certain teams around the state that use their athletes, but here, we have a really, really good coaching staff that will always put us in the best position scheme wise. We determine what the best scheme is and then do what we’re best at.”

He said each team he has played for the past four years has been special and that’s what he’ll miss most when he steps off the field for the final time, but he’s thankful to have those memories.

Heading into this year, his goal is a state championship, which would be the ultimate memory, but he mainly wants to be a good teammate and continue playing for something bigger than himself.

“I always want to chase a championship, wherever I’m at, but I want to keep learning whether that’s high school or college and taking in skills, even if that’s life skills. I want to soak it all in. I never think about I have to score 50 touchdowns to make it a great season. I just want us to come together and have a great season together.”