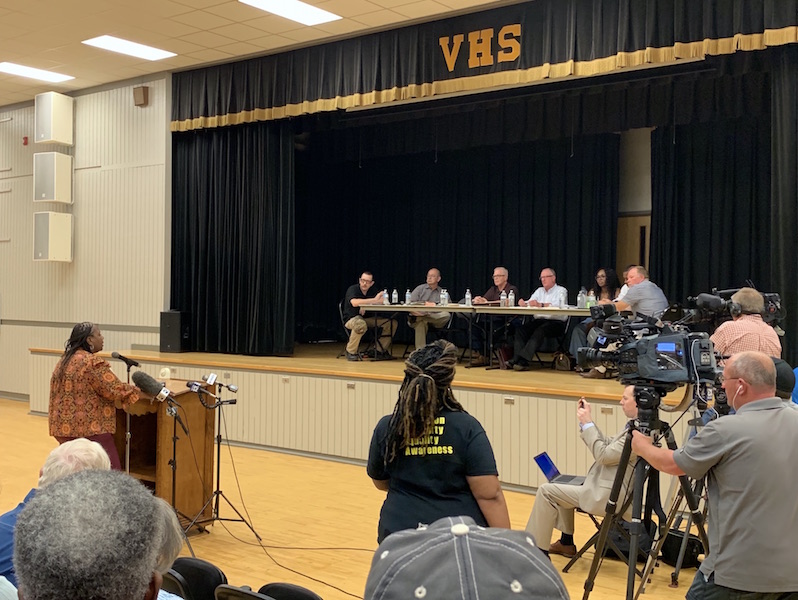 After listening to comments in a public forum, the Vincent City Council voted in favor of an ordinance temporarily abolishing the city’s police department on Thursday, Aug. 18. (Reporter Photo/Emily Sparacino)

VINCENT – City leaders listened to comments from residents regarding the Vincent Police Department before making a decision about its future on the night of Thursday, Aug. 18.

At the end of a crowded public forum held at Vincent Middle High School, the Vincent City Council voted unanimously to pass an ordinance temporarily abolishing the city’s police department in the wake of allegations of an officer sending a racist text message earlier in the summer.

Mayor James Latimer said the city was unable to terminate the employment of the officer accused of sending the text based on the city’s current personnel policies.

“Our city personnel policy requires two write-ups and a verbal warning before we can proceed with termination,” Latimer said. “All of this has uncovered a problem with our personnel policies.”

City Attorney Bill Justice said law enforcement personnel are entitled to due process hearings based on personnel rules that have to be adopted by municipalities, according to Alabama law.

In Vincent’s case, its personnel policy states termination can be done after one verbal warning and two reprimands that are in the file of the employee.

“Based on what I am told, there were not two reprimands in the personnel files of the two (officers),” Justice said. “The solution ongoing in the future is to change the terms of the personnel policy. In my mind, doing the right thing is following the law and not subjecting the city to the possibility of paying out damages.”

After the chief and assistant chief were suspended, the city’s third police officer, whom the Council initially wanted to appoint as interim chief, resigned after the Council’s Aug. 4 meeting.

The majority of those who spoke at the forum Aug. 18 said they were not in favor of dissolving the city’s police department.

Many expressed concerns about potentially long response times to emergency calls and not having adequate police protection at all times.

Others had questions regarding the city having two school resource officers, which Latimer said had not been feasible previously because of manpower and money issues.

City Councilmember Samecca McCrimon asked about the possibility of hiring an outside consulting firm to help rebuild the police department at some point.

For now, Vincent will continue to contract with the SCSO for law enforcement services.

According to Latimer, the cost of contracting with the SCSO will be about $95,000 per deputy working 40 hours a week in Vincent.

The SCSO will still provide law enforcement coverage to the city outside of the 40 hours that one or more SCSO deputies works in Vincent.

City Councilmember Corey Abrams asked to add the word “temporarily” to the ordinance to emphasize the city’s ability to reinstate the department in the future.

Latimer said disbanding the police department was not intended to be a permanent solution, adding his hope is to have enough time to find qualified candidates to fill a department in the future.

“There is still that opportunity to bring the Vincent Police Department back,” Latimer said. “It’s going to take a good bit of time to go through that process.”

Latimer said he and the other City Council members will compile and send their letters regarding the police department situation to the Alabama Ethics Commission on Tuesday, Aug. 23.