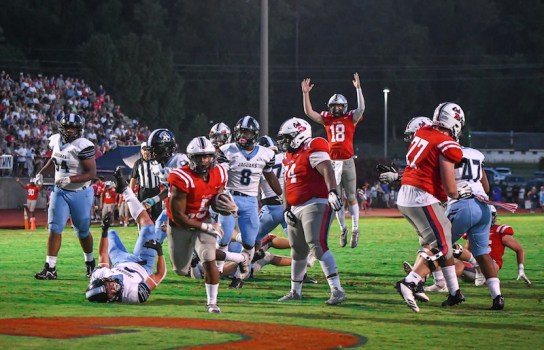 Trey Vassell scores one of his two touchdowns in Oak Mountain's 23-14 season-opening win against Northridge on Aug. 19. (For the Reporter/Priscilla Fitzgerald) 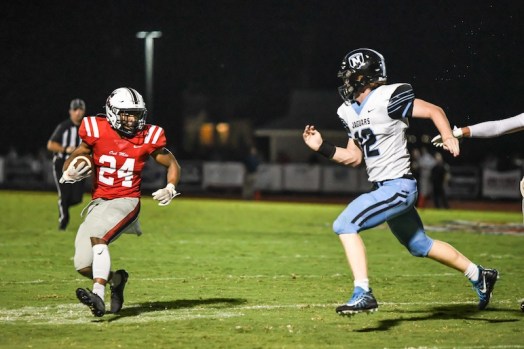 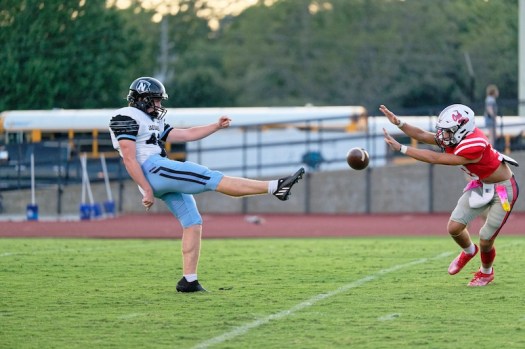 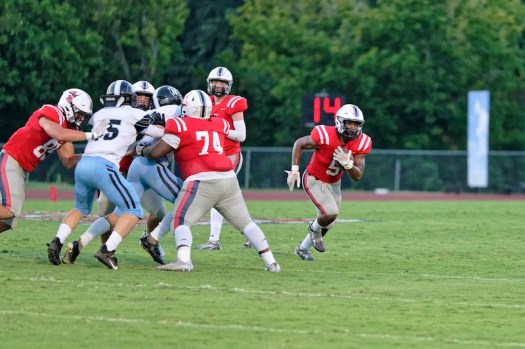 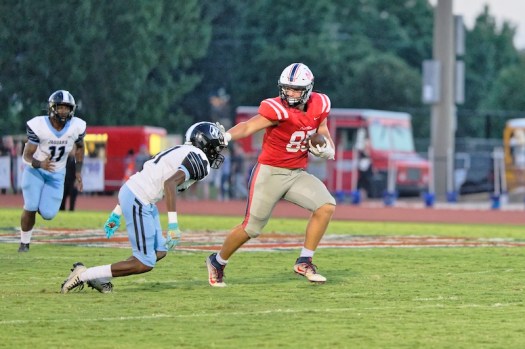 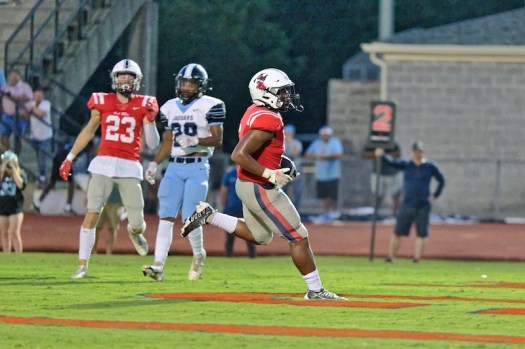 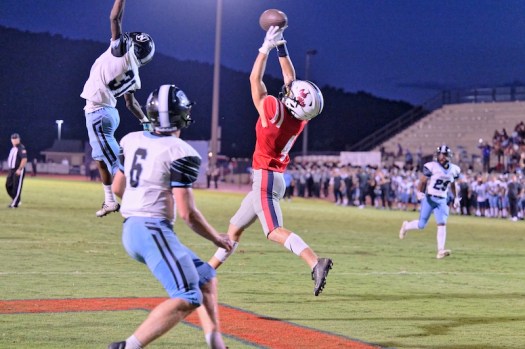 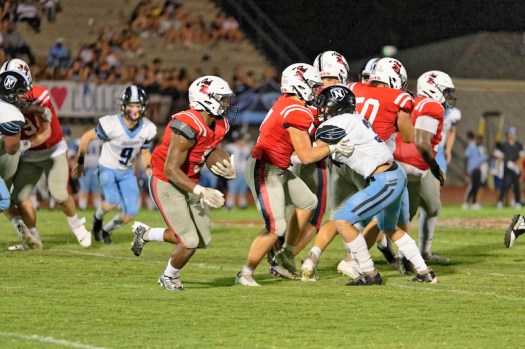 By KEVIN McMAHON | Special to the Reporter

NORTH SHELBY – Oak Mountain kicked off the 2022 season Friday night, Aug. 19 under the lights at Heardmont Stadium with a 23-14 victory over the Northridge Jaguars.

The Eagles used a fast start on the ground, led by Trey Vassell, who finished the night with 117 yards and two touchdowns to help pace the team offensively en route to the 1-0 start.

“I’m just excited to get the win,” head coach Tyler Crane said of the win to start his second year at the helm. “Trey Vassell ran the ball really hard. I can’t say much about him, he gets after it every play.”

Crane was also pleased with the defensive effort in the opener, which was a highlight throughout the game.

“We’ve got 11 guys out there to get after it, and I’m proud of each and every one of them,” he said. “We just have to clean some stuff up offensively and have to finish drives.”

After the Jaguars won the toss, elected to receive and returned the opening kickoff to the 30-yard line, the Oak Mountain defense went to work.

The Eagles forced a three and out on the opening, which eventually led to Cole Kelly blocking the punt attempt and giving the Oak Mountain offense the ball on the Northridge 13-yard line for the team’s opening drive of the season.

The Eagles ran the ball for short gains on their first three plays. Facing a fourth and 2 and a big decision early in the game, Crane elected to put the ball in the hands Vassell.

Relying on his senior, Vassell didn’t let Crane down and picked up the first down.

Three plays later, he carried it into the end zone to give the Eagles an early 7-0 lead.

Northridge took the ball back with 6:37 remaining in the first quarter and appeared to be gaining some momentum on the ground before the Eagles defense built a wall on fourth-and-3 to force a turnover on downs.

After the teams traded possessions, Oak Mountain came back early in the second quarter with another impressive drive.

Following a few strong rushes by Vassell, sophomore quarterback Will O’Dell connected with tight end Jackson Blackwell for a 22-yard completion up the middle.

Two plays later, Davion Foster exploded through the line of scrimmage and found daylight to the left picking up 28-yards on the carry and punching it in for the Eagles’ second touchdown of the game and his first of the season.

Following another forced three-and-out from the Oak Mountain defense, special teams stepped up again when a a mishandled snap on the Northridge punt attempt gave the Eagles the ball back with first-and-goal from the 6-yard line.

On his second attempt of the drive, Vassell carried the ball in to give the Oak Mountain a 21-0 lead in the first half and himself his second rushing touchdown of the game.

The Jaguars were able to narrow the deficit and gain some momentum picking up a 10-yard rushing touchdown late in the second quarter quarter bringing the score to 21-7 at halftime.

Both defenses looked strong returning from the break as each forced early three and outs.

The Eagle’s looked poised to secure their second three and out to start the half when Northridge quarterback Rowdy Christensen hit Travaris Banks, who broke loose for a 77-yard touchdown bringing the score to 21-14 with just under three minutes left in the third quarter.

From there, however, the game became a defensive slugfest.

The team’s traded possessions, and ultimately, the Eagles were able to put the game away with another special teams play in the final five minutes.

With 4:44 to play, the Jags set up to punt near their own end zone, but a snap over the punter’s head went out of the end zone for a safety to make it 23-14, which ultimately became the final score.

The Eagles ran for 142 yards in the win, while the defense limited Northridge to 269 yards for the game. Oak Mountain’s special teams also made a critical difference with three key plays throughout making the difference. O’dell finished with three completions in his first start and totaled 65 yards.

The Eagles will be back in action at home next Friday against county rival Pelham.