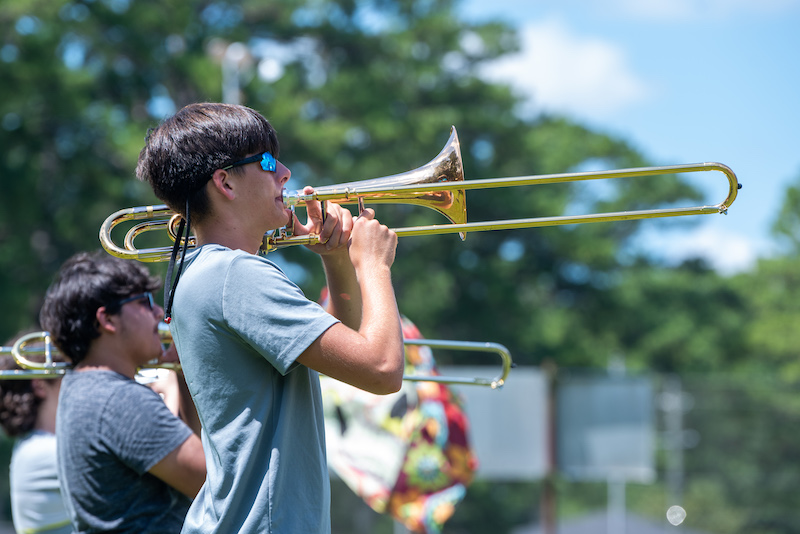 Shelby County middle school and high school band programs provide students with more than a backing soundtrack to pep rallies and football games, they create a sense of community. (File)

For many Shelby County students, school started on Aug. 11, but for band students, things began much earlier with the long, hot days of band camp.

It’s a feeling and situation I can relate to as someone who spent my middle school years and most of my high school years foregoing electives in service of learning how to play an instrument. For me, it was the trumpet.

I had my father’s old cornet, so I followed in his steps and eventually found my way to The Pride of Shelby County Marching Band.

Admittedly, I was not a great band student, but my participation in band provided unforgettable memories and a circle of friends that I spend time with to this day.

Middle school and high school band programs are an important aspect of not only Friday night lights, but the school experience as a whole.

Being a band student requires commitment. It means dedicating yourself, ideally, to practicing at home, not just on the field.

Band means practicing drill, even in the summer heat. It tests your memorization skills and your motor skills as you have to move in rhythm to your designated spot, all while playing your part in the piece.

Like many extracurricular activities, band tests your patience and your social skills as you have to work with different kinds of people.

Students can end up feeling close to other members of their section, and each instrumental section will start to seem like they have their own personalities.

The percussionists like to show off, the trumpets think they know everything and the trombones are just happy to be there.

Some of my more entertaining memories lie in my rookie year in the marching band.

The section leaders would gather together during our water break for what they called “rookie entertainment” where they would perform skits for the benefit of the rookies.

I remember the fun bus rides to competitions and games and the time I spent with friends.

I remember the exciting feeling of winning my first big competition and hugging my best friend beside me in celebration.

Participating in something on such a level requires a lot of effort and time but, thankfully, the reward is worth it.

Band was also an important connection for me as someone who heavily enjoys music as a hobby. It teaches one to understand the basics of composition.

You understand the music process a little better and become familiar with the instruments. You also come to appreciate the practice that is involved in the background and the rehearsal the band must have gone through before recording.

There can also be a competitive aspect to band as students compete with one another for higher ranking “chairs” or to become section leaders.

Bands contend with one another at showcases and competitions for awards.

Being in band is not always easy. Many times I would have rather stayed indoors at home and just played video games, but if I had been allowed to do so, I would have missed out on some important lessons, friendships and memories.

Shelby County middle school and high school band programs provide students with more than a backing soundtrack to pep rallies and football games; they create a sense of community.