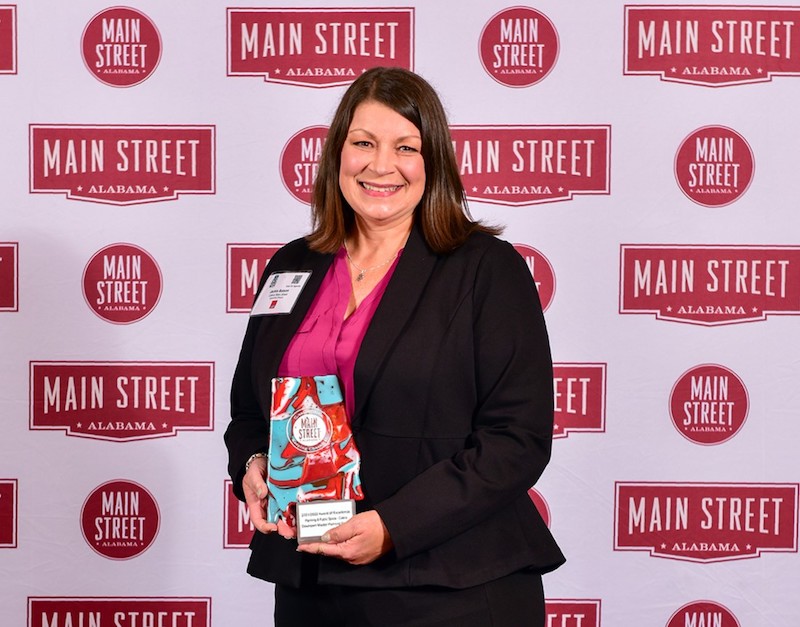 “Calera Main Street is honored to be recognized with the award for our downtown master plan,” Jackie Batson, executive director of Calera Main Street, said. “We have come a long way in the three short years since we’ve been organized, and we have a lot farther to go, but you can’t get there without a well-thought-out plan.

“We worked with Community Design Solutions who brought in specialists to analyze our needs and our opportunities to develop a 157-page plan which is our roadmap for how to revitalize downtown,” Batson continued. “We look forward to beginning some of the plans for parking, streetscaping, building restoration, as well as further developing the Calera Courtyard.”

Calera was the recipient of the Award for Excellence in planning/public space for its downtown master plan. The award recognizes outstanding planning projects and quality design improvements for public spaces.

The full list of winners and descriptions can be found on the Newsroom page on Main Street Alabama’s website, Mainstreetalabama.org.

“Last night we celebrated the accomplishments of local Main Street programs,” Wirth said. “These programs represent small rural cities as well as larger, more urban communities. The diversity of these communities makes each one unique, each are working within its own capacity to improve, reinvigorate and revitalize its downtown or neighborhood commercial districts. We were inspired by local success stories and by the businesses, organizations and individuals who are dedicated to making their communities the best they can be.”

The Awards of Excellence Banquet is a highlight of LAB, a three-day conference that bolsters the efforts of communities participating in the Main Street program or those communities interested in district revitalization. The ninth annual event drew over 150 community leaders from Alabama.

Main Street Alabama has 32 designated programs and over 43 network communities.

According to Main Street Alabama, its goal is to focus on bringing jobs, dollars and people back to Alabama’s historic communities. Economic development is at the heart of its efforts to revitalize downtowns and neighborhood commercial districts.