Football predictions: Week 2 of the season arrives with more excitement 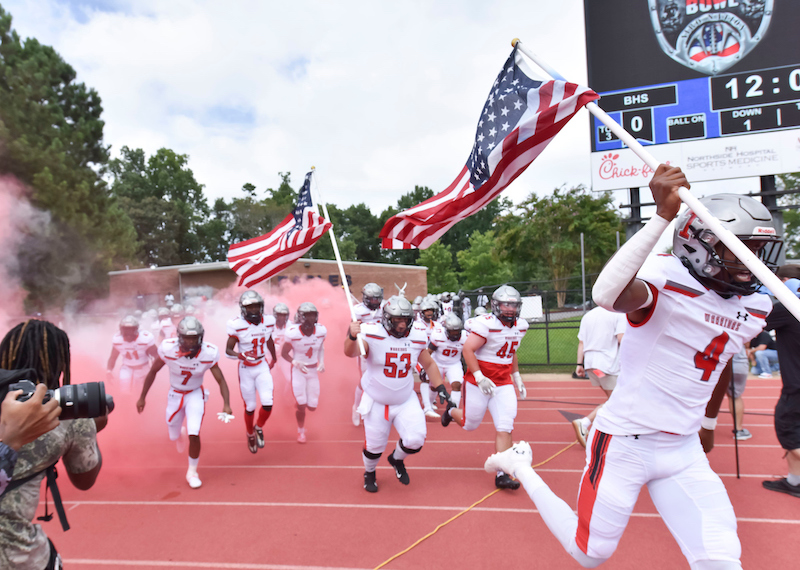 The opening week is behind us, and now, it’s on to week two. There was no shortage of excitement during the first week with several key opening-night games, and there won’t be a letdown during the second week.

Not only will there be five county battles this week, but there is one nationally-televised game and it’s the final week of preparation before region play kicks off a week later.

It is sure to be an action-packed week, as teams look to be clicking on all cylinders heading into an important stretch of the season.

Thompson vs. Lipscomb (Game of the Week, Saturday on ESPNU)

Both of these teams not only enter with the excitement of playing on national television but with one big national game under their belt already. Thompson took on Buford in a top 15 battle to open the season in the Freedom Bowl in Milton last week, while Lipscomb took on the host team Milton during the same event. The difference, Thompson fell 38-7 and Milton won 18-6.

Now, however, they square off in an exciting battle at Warrior Stadium, as the cameras of ESPNU will be on them. Neither will back down from the spotlight that comes along with that, taking it as a chance to showcase their talent, and neither has a shortage in that area. Lipscomb Academy is the top team in the Nashville-metro area regardless of classification and is led by former NFL quarterback and TV analyst Trent Dilfer, while Thompson is considered the best team in Alabama with three consecutive state championships at the highest level of competition. A year ago, both had high-powered offenses and arguably the best defenses in their respective states.

This year, both offenses were somewhat quiet in their opening games, while the defenses continued to show what makes them dangerous. Thompson gave up 38 points, but the majority of those points were given up because of two pick sixes and a kick return for a touchdown. The bigger question mark going into this one is how does Thompson’s offense flip a switch against a defense that was dominant last year and gave up just six to one of the top teams in Georgia last week.

It appears Thompson’s offense is going to have some early growing pains with the loss of their top two running backs, receivers and a quarterback. However, there were signs of growth last week, and now, they’re being doubted. I think this week, the Warriors use that fuel to make a statement. Plus, there is an extra day for head coach Mark Freeman to work his offensive magic with the game kicking off on Saturday. Thompson 21, Lipscomb 17

Entering week two, this is a crucial game for both of these teams. Oak Mountain is continuing its transition into a new style of offense with the departure of Evan Smith, while Pelham is getting familiar to a new head coach. The Eagles opened with a 23-14 win thanks to a powerful run game and impressive defense, while the Panthers fell 14-10 to Jackson-Olin but led at times and showed promise. Oak Mountain has a classification advantage and has won three in a row in the series, but if history tells us anything, it should be a good game. The last three years, neither team has scored more than 28 points and Pelham holds an 11-5 record all-time in the series. Both have strong defenses with much to prove offensively, so expect another low-scoring battle with the classification difference being the only deciding factor going into the game. Oak Mountain 24, Pelham 21

Judging from the four games these two teams have played, this one might be the best game of the week. Briarwood won last year’s battle 42-8, but the previous three before that were all decided by 10 points or less. Expect this year’s game to be similar to those three. Briarwood’s defense is always sound, while the offense is led by 5-star quarterback Christopher Vizzina. Spain Park should be drastically improved this season under new head coach Tim Vakakes with just about everyone back from last year’s team. The Jags hold a classification advantage, but the Lions are always a veteran group. In the opening week, Spain Park clawed out a 14-10 victory in the final minute against Calera, while Briarwood fell to defending state champ Clay-Chalkville 48-0. This one is a flip of the coin, but one thing is clear, Spain Park’s defense is better than last year’s 42-8 game. Expect a tight battle with the two offenses needing to show growth. Briarwood 21, Spain Park 20

The final tune up before Chelsea enters the gauntlet of Class 7A, Region 3 and Calera looks to chase down a region title, this game is important for both to build confidence ahead of challenging schedules after starting 0-1. Last year, Calera picked up a 31-21 win in an entertaining battle. This year, at least at this point, the Eagles should be even better, while Chelsea still has some unknown with several new faces. Calera’s defense was impressive in a 14-10 loss to Spain Park last week, while Chelsea’s offense is still trying to find its identity. Calera 28, Chelsea 17

This will be the first-ever meeting between these two teams, and it should feature some good defensive play. Both used that side of the ball to spark play a year ago, which should be the case again this season. Helena is still trying to get familiar as a team with new faces on both sides of the ball, but the Huskies picked up a 28-6 win against Chelsea in week one thanks to a powerful run game and strong defensive play. With that defense, three productive running backs and a physical offensive line, Helena should be able to control the game and pick up a win in week two. Helena 31, Buckhorn 20

A rivalry that dates back to the early 1900s, these two renewed their rivalry for the first time in 15 years back in 2018 and have now played the last four years in a row. Montevallo has won three of those four, but each game has been tight. Last season, the Wildcats had a bye during the opening week, making this their opener, and Montevallo went on to win 41-24. This season, the opposite happens. The Bulldogs open with a bye, while Shelby County will play week one. To me, that’s a benefit to the Wildcats. They’ll have a week of game film to learn from, which should help them be slightly ahead. Both seem even on paper, however, and should compete for home-field advantage as possible top-two teams in their region, which should make for another classic battle in this long-standing game. Shelby County 27, Montevallo 21

Last year, this matchup was the opener for both teams. Vincent had chance after chance to win straight up, but the Yellow Jackets ultimately fell 18-16 on the field. Later, however, the game was forfeited in their favor because of an ineligible player from Winterboro. Now, the second game of the season in 2022, the Jackets still have that on their mind and have already started 1-0. This year, they want to prove they are the better team on the field, and with just about every starter back on this year’s team, they should be. Vincent 34, Winterboro 20

Last year, Coosa Valley picked up a win in this rivalry battle as part of an improved season under first-year head coach Vince DiLorenzo. This year, there is transition on Coosa Valley’s roster, while Cornerstone is now playing as an 8-man AISA team. There is still a lot of unknown about each squad, but it’s tough to see the Chargers making up close to 30 points this season even though they are improved. Expect a closer battle, however, that could come down to the final drive. Coosa Valley 28, Cornerstone 22

Usually a strong contender in the AISA for a state championship, Evangel Montgomery is shifting to 8-man play this season, which makes this game extremely interesting. The Evangel Lightning don’t lose 8-man games very often as an ACSC team that competes for national championships every season. This game could be intriguing, but the Lightning’s familiarity with 8-man play should provide an advantage, especially with the offense they’ve already shown this season. Evangel 41, Evangel Montgomery 36