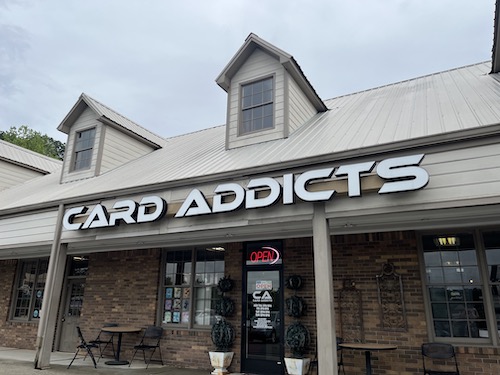 PELHAM– Ethan and Jennifer Brackner are both co-owners of the Pelham located card playing shop Card Addicts, working to reach out to students and children of the Shelby County area.

Ethan said Card Addicts is involved with the community in Pelham.

The couple came into ownership of the facility in 2017 and have celebrated five years in business.

“We bought the store fairly in its infancy still, and we have owned it for five-and-a-half years now since March 2017,” Ethan said.

Ethan said he is content with the Shelby County area’s response to the store as well as the growth he has seen.

The age demographic of customers attending Card Addicts is wide and varies.

“We have moms come in with their kids anywhere from (ages) five to thirteen,” Ethan said. “But we also have a lot of regulars who are here three or five days a week anywhere form young twenties to late thirties.”

Card playing tournaments are held at the store throughout the week.

Ethan said this dream to own his own business has been a long time in the making.

“Ever since I’ve been in high school, I have wanted to own my own business. It has always been a goal of mine,” Ethan said.

“Honestly ever single year we have owned the store it has done better than the last year,” Ethan said. “We started with one employee that we adopted from the previous Owner, and now we have 11 employees, so we have grown quite a bit.”

Ethan said online ordering of products has been good for the store and that the store originally began doing many online orders throughout the COVID-19 pandemic.

“We really pushed it and learned a lot because of COVID,” Ethan said.

Ethan said Card Addicts is involved with the community in Pelham.

Ethan said mobility is good for business in the area when it comes to Summer Snow.

The truck is usually open from March to September, but still available for special events.

“With it being a snow cone business, it’s not open 12 months a year. It is Alabama so there’s a lot of hot weather, but usually March to September, maybe October depending on the weather,” Ethan said.