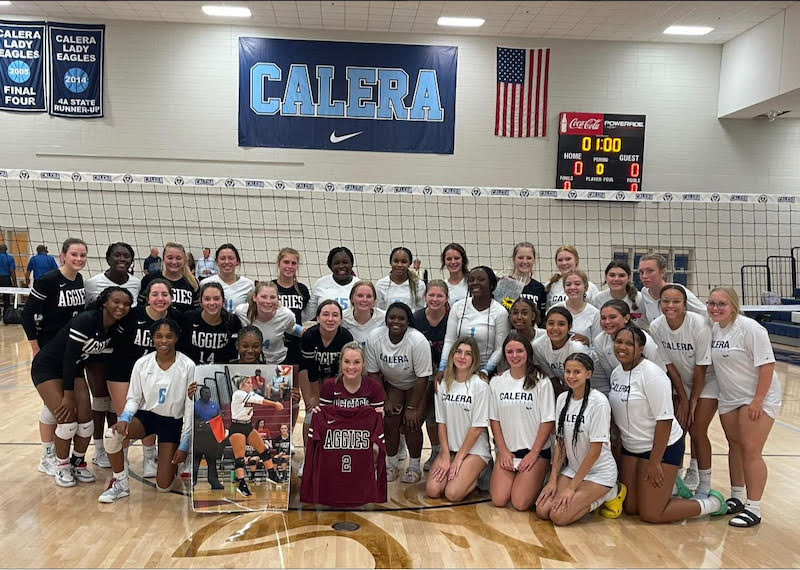 CALERA –Having a teammate is so much more than just a person who players share the court with for two-hour practices and weekly games, they become a crucial part of any student-athlete’s life. Teammates share a special bond. Their love for their team, the trust they have to share with one another, and the friendship that can grow after time spent together playing on the same team for years.

On the evening of Thursday, June 2, 2022, Sylacauga high school lost one of its own. Brighton Clary was just 17 years old when she died at UAB Hospital in Birmingham after she was killed in an ATV accident.

A devastating loss for not just her family, friends, and community, but for her volleyball & softball team as well.

Clary was just months away from starting her senior year at Sylacauga at the time of her death. No one would have expected that she wouldn’t be there to play for her senior season.

Calera high school’s volleyball team played their opening game against Sylacauga on Thursday, August 18, who was devastated to start their season without their late teammate. The Calera Lady Eagles came up with the idea to make sure that Sylcauga knew that Clary’s memory was present in the Thursday night opener.

“We wore ribbons with Brighton’s number on them and their team colors. We got a picture of her and we had it put on a poster and then got the players to sign it,” interim head volleyball coach, Meredith Giangrosso said.

Giangrosso and her team put a remembrance together to start the season off for Slycauga before their first match of the season. The Lady Eagles gave the Aggies roses and held a moment of silence for Clary.

“We just knew how hard that must have been because we consider our team as family and they must have too,” Giangrosso said. “To start a game like that and not have someone that you’ve played for four years with and not be able to have that person with you, it’s totally tragic.”

It was a very emotional evening for both teams and the fans in the stands Thursday evening.

“I’m looking around, my team was breaking down, and their parents were breaking down into tears,” Giangrosso said. “It had a huge effect on them.”

Senior, Jordan Douglas, and junior, Chasity Broadhead, did not know Clary personally but felt compelled to comfort Sylacauga as they started their first game of the season without their beloved teammate.

“We just wanted to do this for them,” Broadhead said. “We couldn’t imagine losing a teammate like that or somebody that we played with for so long.”

“I honestly thought that it was a really sweet thing to do. Losing somebody at such a young age is tragic,” Douglas said. “It was really sad just seeing them crying across the court and us walking to them, giving them a poster and flowers. Showing good sportsmanship is the number one thing that we should start with.”

Losing a teammate is devasting, but Calera’s remembrance of Clary’s memory was an honorable way to start the first volleyball season without the Aggie player. Although the Lady Eagles lost their match against the Aggies, it felt like a win in good sportsmanship to honor the late Aggie.