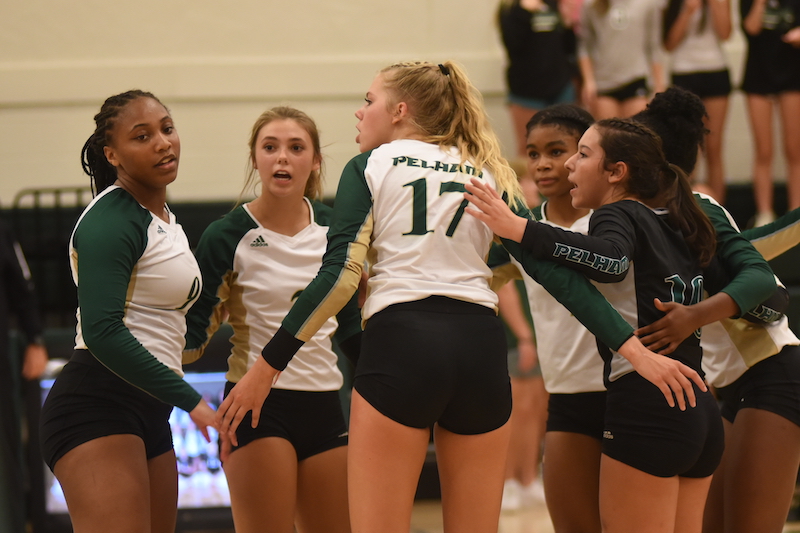 The Panthers came out triumphantly in their match against the Hornets. (Reporter photo/Lauren Sexton)

PELHAM – The pressure was on when the Pelham Panthers met the Chelsea Hornets in a county battle on Tuesday, Aug. 23, but Pelham handled that pressure well en route to a 3-0 sweep.

“Chelsea is really good. I liked how we responded to being down, especially in that third set,” Pelham head coach Perry Robinson said. “Obviously, it’s young in the season and we got a few things to work on. We’ll get back to that tomorrow.”

Sophomore Londyn Wynn and senior Averi Smith led the Panthers with eight kills. Wynn also served the highest number of aces, having an average of one per set. The sophomore also had eight digs for the Panthers in the match.

Juniors Kassadi Jones and Caley Peterson made one solo block each during Tuesday night’s game. Jones also had two block assists for the Panthers. And senior, Emma Studdard made 20 out of the 57 digs Pelham had for the evening.

Smith, an outside hitter, had one of the strongest performances on and off the court in Pelham’s matchup against Chelsea according to Robison.

“She stayed with it. She was engaged in a state of aggression the whole time,” Robison said.

In a close final set against the Hornets, Smith made the winning block for the Panthers. Pelham won the final set of the evening 25-23. In addition to Smith’s eight kills and set-winning block, she served one ace and one assist.

“We’ve just grown so close through the season and we’re just getting closer,” Smith said about her team.

Although her set-winning block was the most memorable part of the evening for Smith, she has enjoyed becoming close to her teammates this season.

The Panther hit the road next to take on Hillcrest and Chelsea will play at home in a tri-match against Briarwood and Tuscaloosa County on Thursday, Aug. 25.