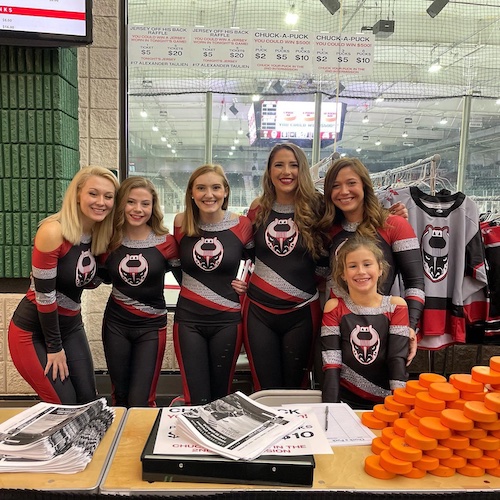 Tryouts will be held by the Bulls office in the Pelham Civic Complex on Wednesday, Aug. 31 at 7:15 p.m.

This will be the sixth season for the Birmingham Bulls and things are changing for the cheerleading squad.

“The first season the girls were all teenage skaters from Birmingham Figure Skating Club and we really emphasized more on the skating ability,” Head Coach Brittany Layton said. “The second and third season we put a minimum age of 18 and planned to have the girls interact more with the fans. Season four we scaled back because of COVID and scaled back to one or two girls on the ice.”

Layton said this type of more personal interaction is what the squad is looking for this season.

“We actually liked having the girls be more visible and out interacting with the fans so we decided to keep only one or two girls on the ice.” Layton said.

Layton said girls looking to try out need to be ready for anything.

“Bulls girls need to be adaptable and able to go with the flow. No two games are alike so they need to be ready for whatever task is asked of them, and able to do that with a friendly smile,” Layton said. “We are looking for fun, energetic, outgoing ladies who love interacting with the fans.”

Layton said that she is excited for the upcoming tryouts and expresses that the experience of being a Bulls girl is truly a valuable one.

“I am so excited for tryouts. I love hockey and I love working with the Bulls. The hockey season is very long so we get to spend a lot of time together. We became a little family and I have made some lifelong friends with former Bulls girls.” She said.

Layton said the Bulls fanbase is a popular one.

“The Bulls have a great following and the games are always a blast,” Layton said. “However, in the last couple of years the girls have also started getting some fans of their own. There are so many little girls that come to the games and have their favorite girl and ask for a picture. It is so great to see how the girls have become role models to some younger fans.”

More information can be found on the Birmingham Bulls official website: www.bullshockey.net or facebook.com/bhambulls