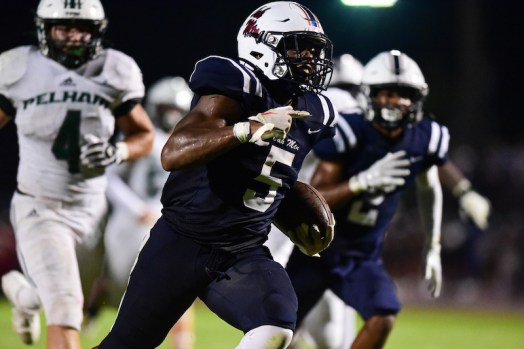 The Oak Mountain Eagles were able to pick up a 21-17 victory against rival Pelham on Friday, Aug. 26 to improve to 2-0 on the season. (For the Reporter/Jeremy Raines) 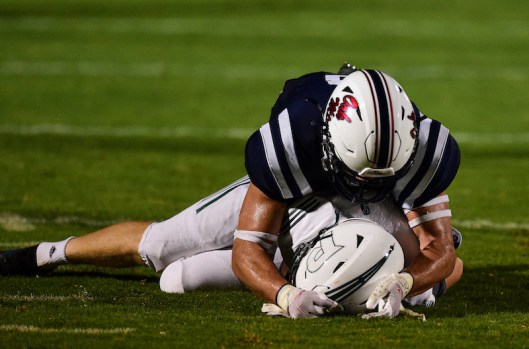 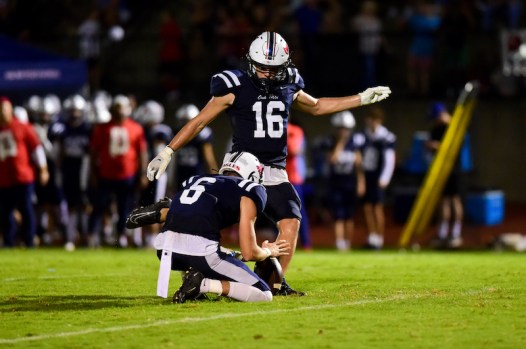 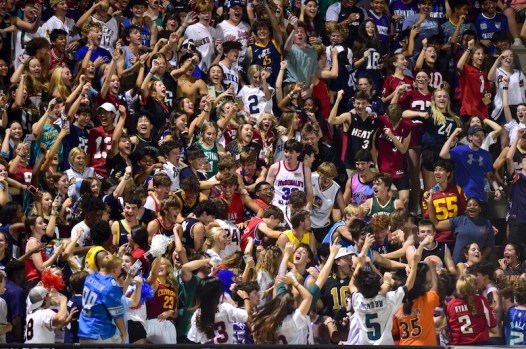 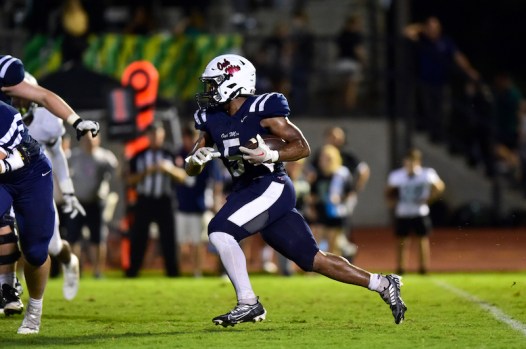 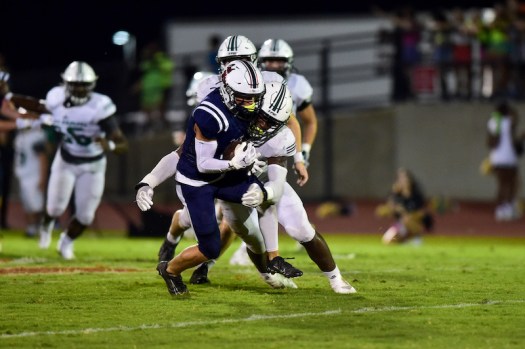 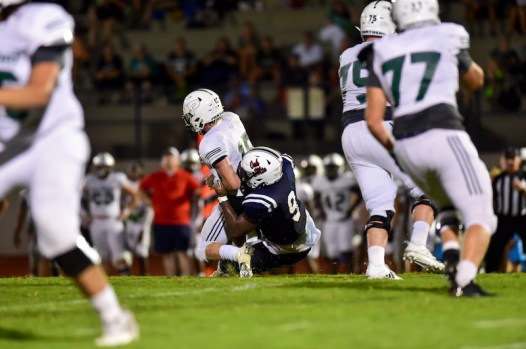 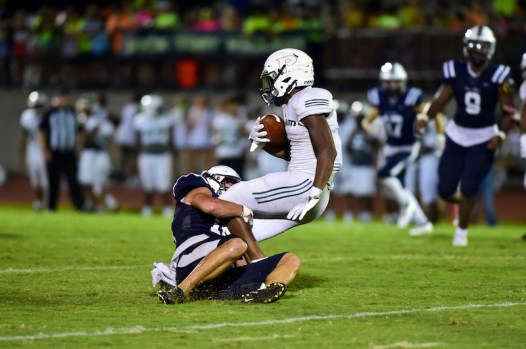 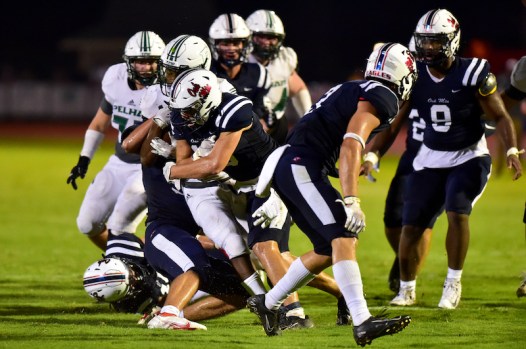 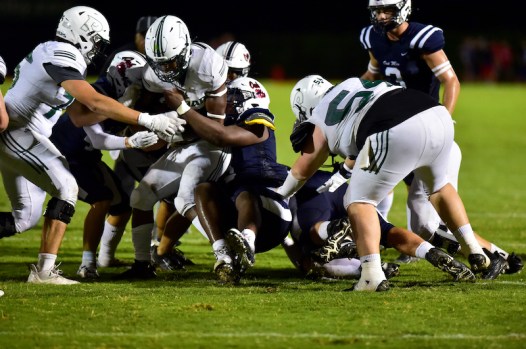 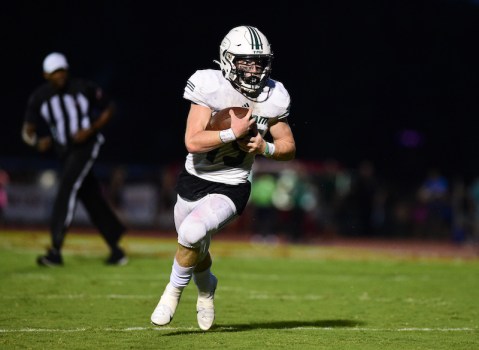 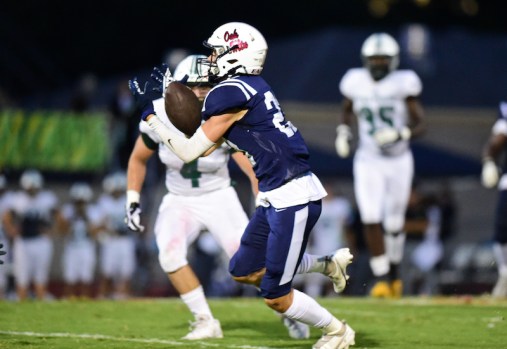 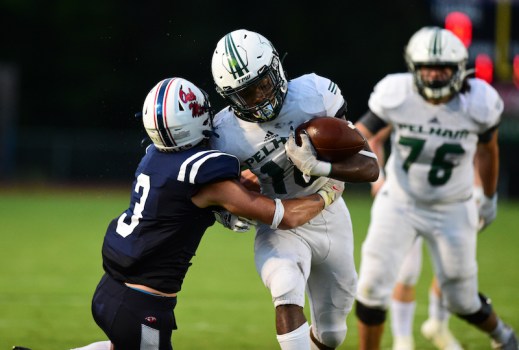 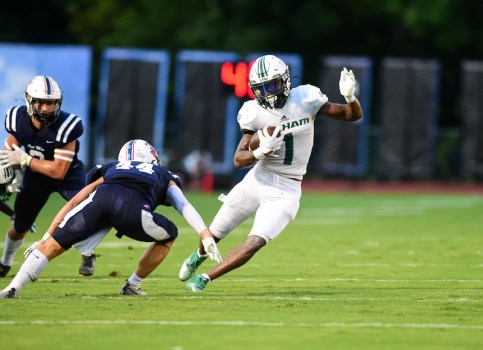 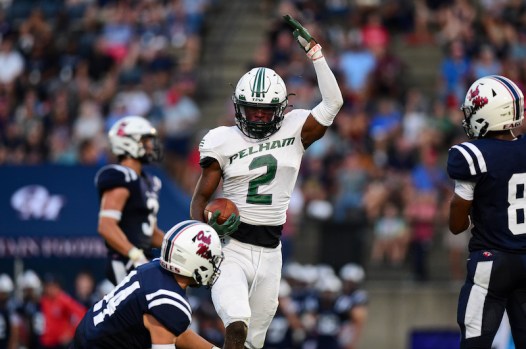 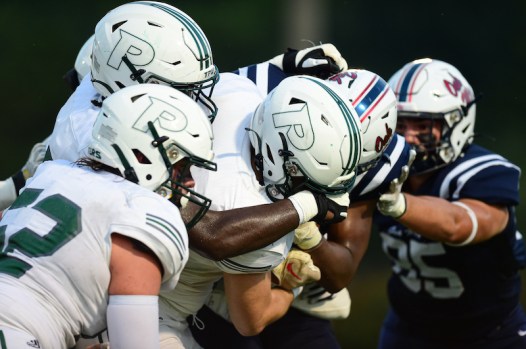 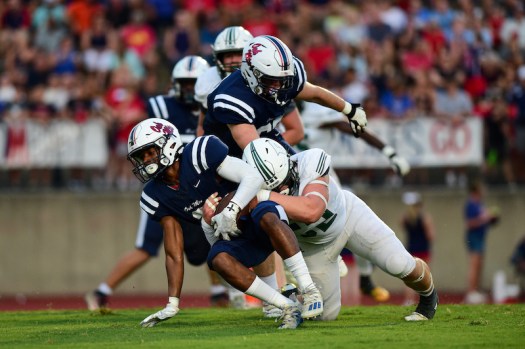 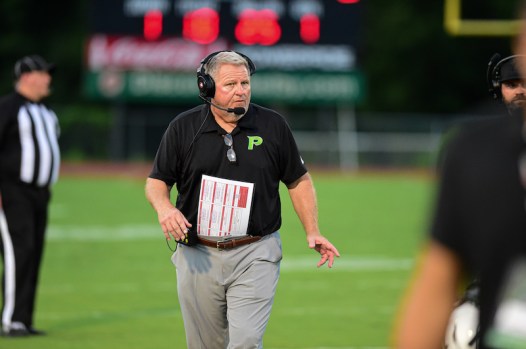 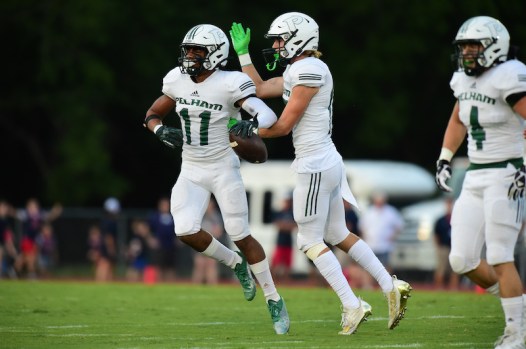 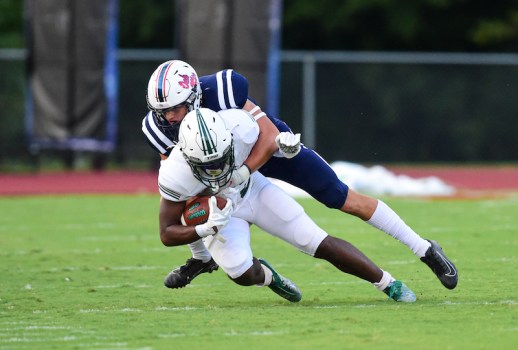 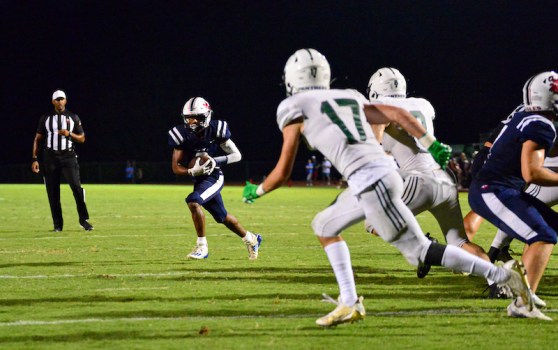 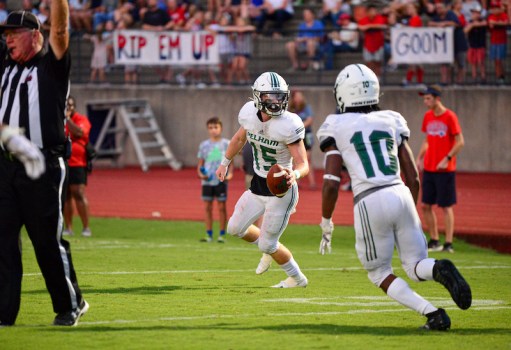 NORTH SHELBY – It didn’t come without its shares of scares throughout, but the Oak Mountain Eagles were able to improve to 2-0 on Friday, Aug. 26 with a thrilling 21-17 victory against rival Pelham.

The Eagles fell behind 6-0 late in the first quarter, but ultimately took the lead just before the half and didn’t trail again the rest of the game on the way to the four-point victory in front of a home crowd at Heardmont Park.

“I’m happy that we got the win,” Oak Mountain head coach Tyler Crane said after the win. “Our kids are resilient, we kept fighting, worked our butts off and got out of here with a W.”

Pelham, however, had several chances to spoil Oak Mountain’s night, but missed opportunities became a theme of the night for both sides.

In an otherwise quiet first half, the two teams put together late drives at the end of each quarter to create moments of excitement.

Pelham started in the final seconds of the opening quarter. With 3:40 to play in the half, the Panthers put together a nine-play drive that ended when quarterback Clayton Mains carried the ball in from 1 yard out.

A missed PAT, however, left a point on the field and Pelham in front 6-0 to end the opening quarter. The drive featured a big pass play from Mains to Jamal Miles of 27 yards, while Mains, Darius Copeland and Ra-sen Martin all had big runs on the drive.

Oak Mountain was looking to answer with a solid ensuing drive, but one of two interceptions for the Eagles gave the ball back to the Panthers with good field position after a strong return from Ethan Hill.

Both teams, however, failed to capitalize on mistakes in the first half.

Pelham missed two field goals from close range, while Oak Mountain missed a big opportunity near the half.

The Eagles, however, were able to score late in the second quarter to take the lead.

They put together a nine-play drive of their own that saw quarterback Will O’Dell hit Tristyn Vardaman for a 12-yard pass, while O’Dell, Trey Vassell and Davion Foster all had big runs.

Eventually, Vassell broke loose for the first time in the game with a 25-yard touchdown run that put Oak Mountain in front 7-0 following the PAT with 2:50 left in the half.

Oak Mountain had another chance shortly after, forcing a three-and-out from the Panthers.

Then, on the punt attempt, a fumbled snap by the Panthers led to Oak Mountain taking over at the Pelham 7-yard line with 1:19 to play.

After eventually getting to the 1-yard line following a 6-yard run from Vassell, a false start pushed the Eagles back. A short run and a run for no gain set up fourth-and-goal from the 2-yard line.

Pelham’s defense then answered the bell with a goal-line stand to send the game into the half with Oak Mountain in front 7-6 rather than 14-6.

Coming out of the half, an interesting series of events unfolded that didn’t look to benefit the Eagles at first, but ultimately did.

Due to miscommunication during the coin toss, the Eagles were forced to kick off for the second half in a row, making them lose a possession in the game.

“I’ve never kicked off twice in a game,” Crane said. “I’m not really sure what that was about. It goes back to the communication part between the officials and a 17-year-old kid. I promise you, I didn’t want to kick it twice, but to be honest with you, I felt like it gave our team a bit of a fire. It kind of got them going.”

The Eagles used that to fuel a strong start defensively to the half, to get the ball in the hands of the offense.

After forcing a quick three-and-out, the Eagles scored in five plays after a pass from O’Dell to Zach Fitzgerald was tipped before ending in a big first-down catch from Fitzgerald of 11 yards.

Right after, Davion Foster took a hand-off from O’Dell and sprinted around left end and by all of the defenders for a 24-yard touchdown run that put the Eagles on top 14-6 with 8:13 left in the third quarter.

Pelham did respond with an impressive drive, but once again, they were forced to settle for a field goal after getting back into good field position.

This time, however, they converted with a 26-yard field goal to cut the deficit to 14-9 with 3:13 to play in the period.

Then came the flash of excellence from O’Dell in the passing game.

On the ensuing drive, he hit Sawyer Smith on a high-arching pass deep down the field that ended with a 69-yard touchdown pass to quickly extend the Eagles’ lead to 21-9 going to the final quarter.

All of a sudden, however, a low-scoring game for a while started to take an offensive turn as Pelham came back with a quick answer in the first three minutes of the final quarter.

Forced to punt, the Panthers earned a first down on a roughing the kicker penalty and capitalized immediately on a 66-yard touchdown pass from Mains to Copeland to make it 21-17 with 9:03 to play.

From there, however, Oak Mountain’s defense was able to flip a switch and turn back into the defense that started strong.

The Eagles forced a turnover on downs with 2:45 to play and then did the same in the final minute of the game to prevent any late heroics from the Panthers.

“I’m proud of those guys man,” Crane said of the defense. “They fought their butts off. We put them in some bad situations. Hats off to our defense, they played their butts off and helped us get this win.”

Vassell finished the game with his second consecutive 100-plus yard game to start the season with 109 yards on 25 carries, while O’Dell finished with 128 yards on 7-of-12 passing with one touchdown. Foster added 47 yards on the ground, while Smith led all Oak Mountain receivers with 93 yards and a touchdown on three receptions.

Jacob Porco led Oak Mountain with six tackles and one for loss, while Robert Yoder IV, Carter Lehman, Emmanuel Waller and Garrett Murphy all had at least four tackles. Waller added two for loss and a sack.

Oak Mountain now travels to Hewitt next week to open region play, while Pelham has a bye week before opening region play.