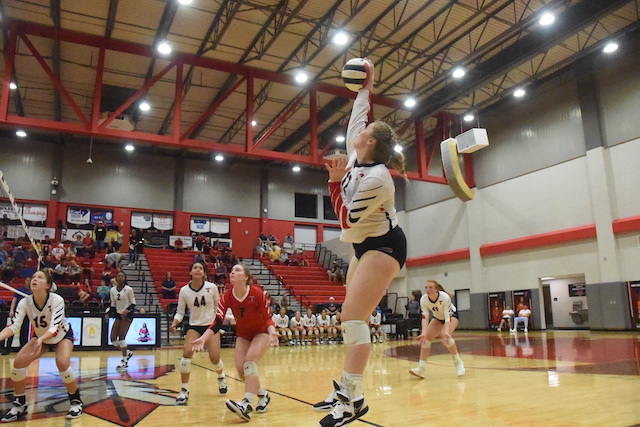 With the bleachers packed with fans, the Warriors played the Tigers in their first home game of the season. (Reporter Photo/Lauren Sexton)

ALABASTER – The stands in Warrior Arena were packed with fans on Thursday, Aug. 25, for Thompson High School’s volleyball team’s first home game of the season. Despite Thompson’s best efforts, the Auburn High School Tigers beat the Warriors 3-2 in a close five-set match.

“I think it was a great experience for our team to be in a five-set match early in the year,” said Thompson’s head coach Judy Green. There were only two members with experience returning to the team this year, and Green described the game as a great lesson for the team.

This was the first five-set match many of the players had ever played, and each set was won by just a few points for both the Warriors and the Tigers. The Tigers won the first, fourth, and fifth sets 25-23, 27-25, and 15-12.

The Warriors secured two solid wins in the Thursday night match. Thompson won the second set scoring 25-23 and had a huge lead in the third match scoring 25-12. Thompson’s offense played a strong game. In each set, the Warriors made huge comebacks after trailing behind by a few points.

“Coming back and winning the third set, I think that we had kind of gotten it in our heads a little bit, but we all were able to come together,” said senior Hannah Fincher. “Even though we did lose, it really got us high, and it got us ready.”

Returning senior Fincher had a stand-out performance even after recovering from an injured ankle.

“I think that she’s working her way into five-set,” said Green about Fincher’s performance. “She played really well tonight. She was efficient in attacking, she did a great job at the net and walking as well.”

Missing summer training was a huge setback for Fincher, not just physically,but mentally as well. However, her team helped get her into the right mindset for their match against Auburn.

“I feel like our team is very encouraging. We just encourage each other and get us in the right mindset,” Fincher said. “It was hard mentally to come back, but I feel like I was able to step right back into the role that I had been given and got right back to it.”

The Warriors will be back on the road this weekend to participate in Huntsville Ironman Volleyball Tournament before their county match against the Spain Park Jaguars on Tuesday, Aug. 30.