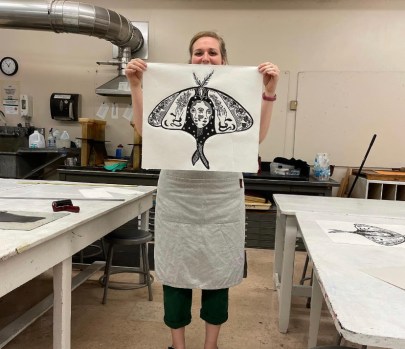 One of three Artists in Residence for the Stephens Printmaking Fellowship, Lindsay Dyess, created prints made from relief carved linoleum stamps. Her work is inspired from fairy tales and stories she’s loved over the years. (For the Reporter/Sasha Johns) 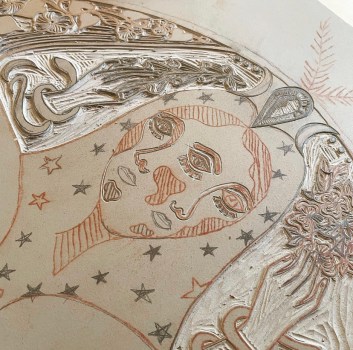 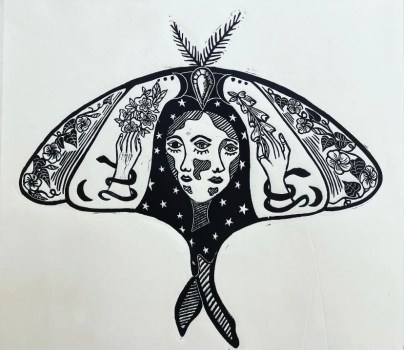 MONTEVALLO – This summer the University of Montevallo is hosting its first Artist in Residence program. Three Montevallo alumni—Lindsay Dyess, Justin Banger and Erica V. P. Lewis—were chosen to be part of the Stephens Printmaking Fellowship that is to pilot for a yearly program.

After the university reached out to these alumni about being part of the pilot program, each artist proposed what they needed for their projects in the way of supplies and assistance. They were each given a month of studio time to work on their various printmaking collections, each one using a different method.

Dyess worked in relief printmaking with designs she carved into linoleum blocks. Banger created prints using an old method called intaglio printing that was used to print illustrations in books, which is the opposite of relief and uses copper plates. Lewis created large format prints also using a relief technique.

We were given the supplies we needed and got to do whatever body of work we wanted to do as long as it involved printmaking,” Dyess said about some of the benefits of working in residence at the school. “I had time in the studio, and I had an assistant. I got to use their presses which I don’t have at home, so that was nice.”

She said the value of having that space and time to have creative freedom and be around other artists helped her to focus in a way she could not have at home.

She also said it gave her a chance to mentor another artist by working with her assistant who is also named Erika Lewis, not to be confused with Erica V. P. Lewis who is one of the other fellowship artists.

Dyess worked by creating an image on a linoleum block that she and her assistant carved with gouges. Once the design is created she applies ink and rolls it out with the presses available at the school. Having created most prints by hand, the rollers allowed her to apply even pressure to create a more consistent final product. With her blocks, she is able to create a series in a specific set of colors, and this allows her to create another edition of prints later.

This can be seen in one of her first editions of prints she’s created that look like a giant whimsical moth.

Dyess’s full body of work, and the work of the other fellows in the program, is on display now at Bloch Hall Gallery at the University of Montevallo. There will be a special gallery reception and an artist’s talk at Bloch Hall on Thursday, Sept. 1 from 4-6 p.m. It is free and open to the public.