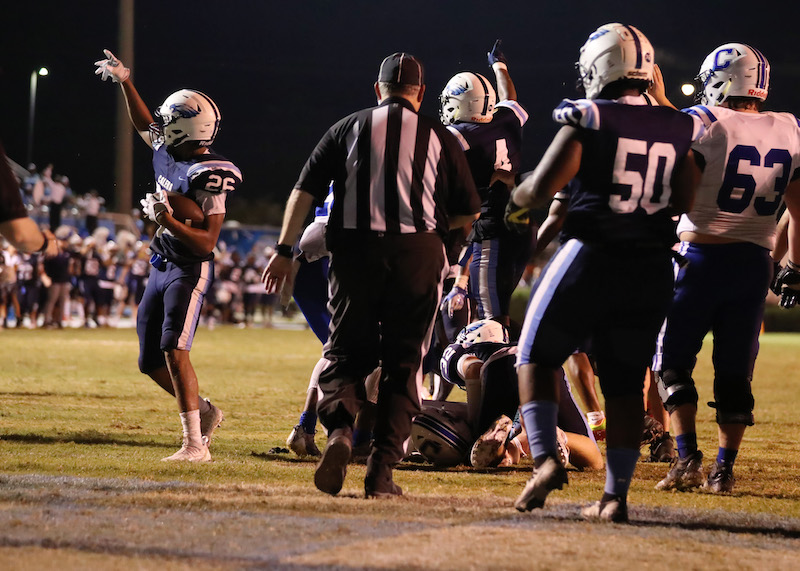 he Calera Eagles win their first game of the season in their second county match-up, Chelsea in Friday's night game.

CALERA – Nothing screams small-town football more than a county rivalry match. The Chelsea Hornets traveled to take on Calera’s Eagles on Friday, Aug 26, in week two of the football season.

Week two for Chelsea and Calera was far more than just a county battle, it was a battle of the defenses. For three long quarters, both teams were neck and neck with each having three points on the scoreboard. However, it was down to the fourth quarter that determined the fate of Calera’s first win of the season.

Chelsea started the game by grabbing the early three-point lead. The Hornets faced fourth-and-6 at the 24-yard line when they attempted a field goal that was successful in the final two minutes of the opening quarter.

The field goal wasn’t the only major highlight of the last couple of minutes from the first quarter, as Calera’s Michael Banks-Mason intercepted a Chelsea pass at one point. The touchdown Banks-Mason scored during a 76-yard return, however, was negated by a penalty for blocking in the back.

After Chelsea’s Jaeden Bennett tackled Calera’s Daniel Brown for a 3-yard loss, the Eagles were able to even the score on fourth down with 6:26 remaining of the second quarter. Ending the first half with Calera and Chelsea tied 3-3.

Returning after the second half of the county matchup, it was clear neither defense was planning to let up anytime soon. With three-quarters filled with helmets and shoes flying off and the field covered with yellow flags, it seemed as though the game could have potentially gone into overtime. However, the fourth quarter changed everything.

For the first time since Calera had made the field goal in the second quarter, Chelsea got a three-point lead when Chelsea’s, Sam Parish successfully kicked a field goal from the 24-yard line with 9:43 left in the game.

Having scored early in the fourth quarter, it was too soon to say if Chelsea had secured the win for the evening.

Sure enough, Calera answered with a 57-yard drive resulting in running back Amari Brundidge getting the final touchdown of the evening for the Eagles.

Despite Chelsea’s best efforts, the Hornets attempted to make a touchdown within the last minute of the game. However, Calera’s defense recovered the fumble which sealed their first win of the season at home.

“I love these games, but they’re stressful. I might get a little more gray in my beard,” Calera head coach, Jason Hamlin said about playing a heavy defense on defense game against Chelsea. “I mean hats off to them. They’re gonna be a force to be reckoned with.”

Senior, Michael Banks-Mason had a big night for Calera. Banks had eight tackles and one interception during the first half.

“We have eight more games and maybe a playoff, but we are going to get better as the season goes on,” Banks said about his hopes for the team’s future this season.

Calera was led by 118 yards on 19 carries during the win from Brown, while Preston Stokes finished with 112 yards passing in the victory. Brundidge finished with 29 yards, including the game-winning touchdown, while KD Young had two catches for 41 yards.

Chelsea head coach Todd Cassity talked about how his team was close to a different outcome.

“We got a lot of pride, got a lot of heart, we just gotta keep working,” Chelsea head coach, Todd Cassity said about the Hornet’s performance in the game. “We got inside the 20 about three or four times and didn’t score a touchdown. We just gotta learn to finish a drive.”

Calera takes on Benjamin Russell in Alexander City next week, while Chelsea will return home to play Tuscaloosa County.