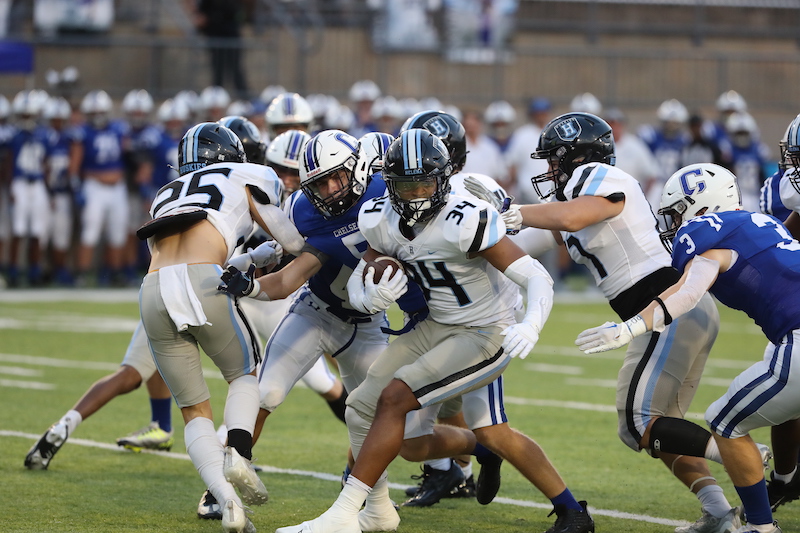 The Helena Huskies improved to 2-0 on the season behind another big night running the football, including three more touchdowns from junior running back Jordan Washington. (File)

NEW MARKET – For the second week in a row, junior running back Jordan Washington set the tone early for the Helena Huskies on Friday, Aug. 26, but he was one of many storylines for the Huskies en route to a dominant 55-17 victory against Buckhorn.

On the road for the second week in a row, Helena was able to earn an early 14-10 lead on the heels of another strong start on the ground, but that was just the beginning.

Not only did Helena take a 28-10 advantage into the halftime break, but following their 14-10 advantage late in the first quarter, they scored 41 unanswered to eventually take a 55-10 lead before ultimately winning 55-17.

It was Washington who set the tone for the second week in a row. After scoring twice in the first half of a 28-6 victory against Chelsea last week and totaling near 150 yards, he totaled three first-half touchdowns this week to play a major role in the 22-point advantage at the break.

He went on to finish the game with 116 yards and those three touchdowns in the win, as the Huskies were able to get help from several others on the offensive side.

Quarterback Dalton Lewellyn had two scores as well, running one in from 60-plus yards and throwing for one of 60-plus yards, finishing the night with more than 200 all-purpose yards thanks to 154 passing yards and 82 yards on the ground.

AJ Horstead also added a touchdown run for the Huskies , while Micah Pleasant and Domynyck Santiago closed out the scoring with two touchdown runs of their own, giving the Huskies seven touchdowns on the ground in the victory. Helena ran for 339 yards on 36 carries in the win.

Hunter Hale also had a big game as a receiver, finishing with two catches for 76 yards and a touchdown on two catches.

The Huskies are now 2-0 on the season and will host Homewood in a big region opener next Friday. The Huskies have won their first two games by a combined score of 83-23, while Homewood is 1-1 with a 38-20 win against John Carroll and a 35-0 loss to Vestavia Hills.