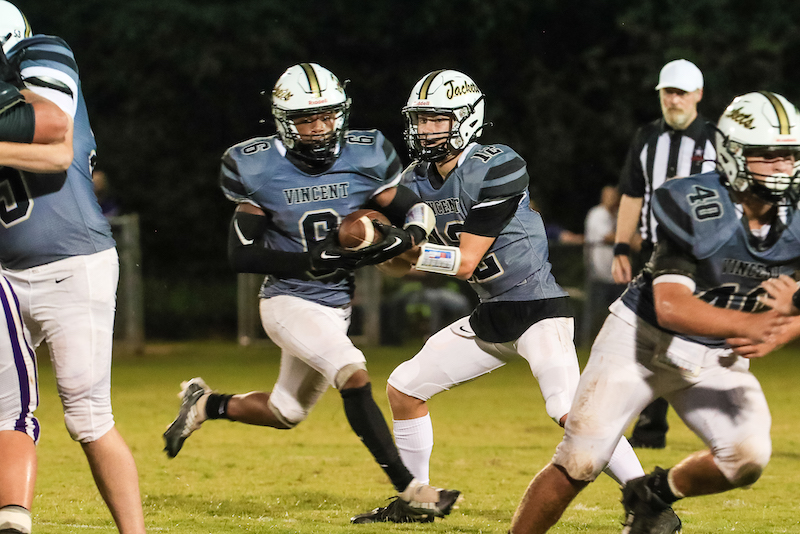 The Vincent Yellow Jackets picked up a 56-0 shutout of Winterboro on Friday, Aug. 26 to improve to 2-0 on the season. (File)

ALPINE – The Vincent Yellow Jackets garnered their second win in as many games to start the 2022 season thanks to a 56-0 shutout over Winterboro on Friday night, Aug. 26.

Domination was the name of the game, and Vincent coach Lucas Weatherford said the defense’s relentless strategy as well as the offense’s ability to overcome large deficits together set the tone for the game.

“I told them I wanted them to go out and play to our standard no matter what happened,” Weatherford said. “I was expecting it to be a battle. Winterboro’s got some really good athletes and always plays us tough. I was proud that we played a complete game and dominated a complete game.”

The Jackets started strong on a 64-yard opening drive, capped by a 20-yard Rykelus Robertson touchdown run. The defense held the Bulldogs to a three-and-out, and a blocked punt paved the way for a 16-yard touchdown pass from Blake Allums to Tray Youngblood.

Allums and Youngblood connected again on a 41-yard pass, and Youngblood ran a 2-point conversion to make it 22-0 at the end of one quarter. That conversion canceled out a missed PAT following a 6-yard Allums keeper across the goal line, resulting in a 28-0 score.

The Jacket defense stung again as Zac Carlisle ran an interception back for a 60-plus-yard touchdown. Gavin Kratz kicked the extra point to extend the lead to 35.

Just before halftime, Robertson found the end zone again from 11 yards out, and the score was 42-0 Vincent at the half.

The second half at Alpine was much like the first, as the Yellow Jackets continued to dominate. Backup quarterback Casen Fields ran a 33-yard touchdown to make it 49-0.

Finally, in the fourth quarter, Jayden Roberts stacked on another six points on a 17-yard trip to the end zone.

Defensively, Zack Wright led with 15 tackles and Carlisle made 6 solos and an interception for a touchdown. Also, Ray Albright made 9 tackles.

Next week, Vincent travels to face Central of Coosa County in their third game of the season.