Football predictions: A look ahead to week 3 and region play 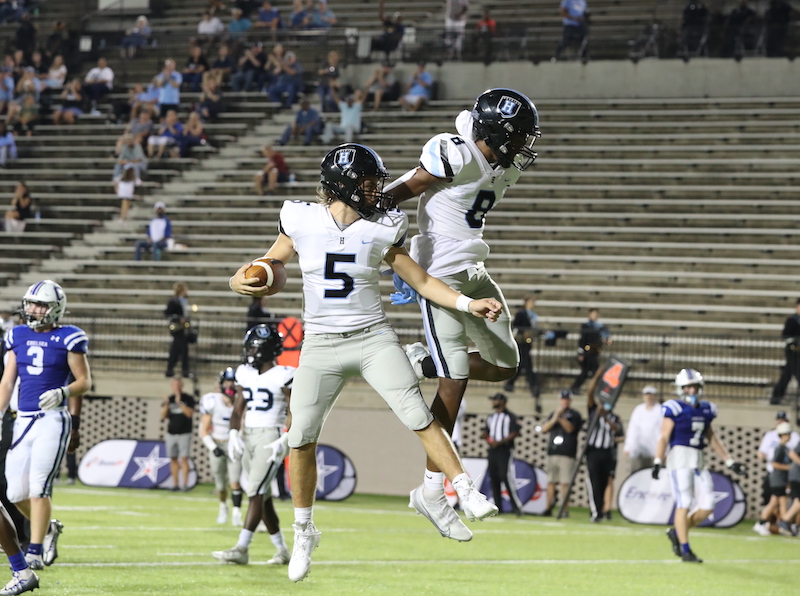 Helena will host Homewood in this week's Game of the Week, as teams across Shelby County open region play on Friday night. (For the Reporter/Cari Dean)

If you blinked, you may have missed the first two weeks of the regular season, but here we are, set for the opening week of region play this Friday.

It has been an exciting two weeks to kick off the season thanks to several county battles, some national matchups and several thrilling finishes, but now, the real season begins.

As region play begins, so does the hope for each team chasing down a playoff spot this season, and, more importantly, a championship.

It will be another big week as teams look to prove they are the frontrunner to claim a region title come October.

Helena vs. Homewood (Game of the Week)

There is no shortage of good games this week, but this one in particular sticks out. You’ve got Helena entering with region titles in two of the last three years and three straight top-two finishes, while Homewood enters the region this year looking to play spoiler. This game feels like it could set the tone for not only one of these two to end up as a top-two seed in the region, but possibly as region champs.

Helena has looked nothing short of stellar running the football and playing defense this season en route to wins of 28-6 against Chelsea and 55-17 against Buckhorn. Now at 2-0, the Huskies get a Homewood team that enters this game 1-1 following a season-opening 38-20 win against John Carroll and a 35-0 loss to Vestavia Hills last week.

What really sticks out is that Helena has combined to run for 200-plus yards in back-to-back games with Jordan Washington already totaling more than 300 himself with five combined touchdowns. The Patriots, however, enter this game fresh off giving up more than 200 rushing yards to Vestavia. Pair that with no points scored and now a Helena defense that has essentially given up 16 points this season, and you have to think the Huskies have a great shot. Homewood, however, won’t be scared of this battle. The Patriots have talent at quarterback and have a point to prove. That should make for a tight battle, but it will ultimately boil down to Helena’s ground game in this one. Helena 28, Homewood 17

There’s no hiding Thompson’s 0-2 start to the season. It’s the first time since the Warriors went 0-10 in 2014 that they have started a season 0-2, and teams across the state, fans and others have taken notice. But let’s pump the breaks real quick. Of course, it is going to be magnified when a team that has won three state championships in a row starts the next season 0-2, but one of those teams was inside the top five nationally and the other inside the top 50.

Yes, the offense still has work to do and mistakes have to be fixed—mainly protecting the ball and up front on the offensive line—but this is a team that lost 90-percent of its offensive production from last year and led Lipscomb 14-3 in the second half and trailed Buford 7-0 in the second half. The defense has played well enough to beat the best teams in the country, and that theme will continue. Once this offense starts rolling, this team is still very much the top team to take down this season.

This week, the Warriors will travel to Vestavia Hills to open region play, and it’s one where Thompson will have to be prepared. Many see the Rebels as drastically improved, and that showed in a 35-0 win against Homewood last week. That said, the Rebels lost to Mountain Brook 24-14 in the opener. Thompson’s defense will be every bit as good as the Spartans, and the Warriors now have some motivation to prove people wrong. That has to be what fuels this offense throughout the week to come out and make a statement. After two weeks against the talent they’ve played, they’ll be ready to unleash some frustration this week. Thompson 31, Vestavia Hills 10

Now sitting at 2-0 for the third year in a row, the real fun begins for Oak Mountain. Fresh off wins of 23-14 and 21-17 against Pelham and Northridge, respectively, to begin the season, the Eagles now get No. 6 Hewitt-Trussville to open up the gauntlet of region play in Class 7A, Region 3. The Huskies are 1-1, but that one loss was to No. 1 Central-Phenix City 37-21, while the victory was a 64-17 thumping of Gadsden City last week. The Eagles have an impressive defense again this season, while their run game has been tremendous behind Trey Vassell and Davion Foster. Taking on the Huskies, however, they’ll have to be perfect. Last week, they struggled to capitalize on several chances and had some turnovers. Sophomore quarterback Will O’Dell has also shown tremendous upside with his arm, but now he gets a stiff test. If the Eagles capitalize on all opportunities, protect the ball and get a well-played game from O’Dell, they’ll be in this one late.  Oak Mountain 17, Hewitt-Trussville 31

For the first time in a while, this crosstown rivalry battle has some intrigue. Both Spain Park and Hoover entered the season with new head coaches and both have done their share of good things already. Hoover, led by Wade Waldrop, is now 1-1 after a tough 17-14 loss to No. 2 Auburn in week one and a 56-7 win against Bartlett (Tenn.) last week, while Spain Park is also at 1-1 with a last-minute 14-10 win against Calera and last-minute 23-21 loss to Briarwood last week. The biggest advantage for Spain Park going into this matchup is the drastic improvement on the defensive side of the ball. I truly believe that will keep them in this game, while they have a physical team that won’t back down from the challenge on either side. Hoover, however, narrowly beat the No. 2 team in the state and should be favored, but don’t be surprised if it goes down to the wire because of two talented defenses. Hoover 28, Spain Park 17

The wait is over. Chelsea will play its first Class 7A, Region 3 game as a 7A team this week against Tuscaloosa County. The question is, where will it take place? As the team’s new turf is finalized, it’s unclear if it will be ready for game time, but this is an exciting week nonetheless. After a 0-2 start to the season against two 6A opponents, many may be doubting the Hornets’ ability to compete in this new region, but they’ve played strong defensively in each of the first two matchups. Chelsea dropped the opener 28-6 and fell to Calera 10-6 last week. I think they’ll give offenses problems most of the year. That said, the offense is going to have to take strides in a hurry. They’ve struggled at times to move it, and then, just as they look to be getting some momentum, they can’t capitalize. This week, that has to change for Chelsea to walk away victorious. They’ll have to prove they have taken those strides on the field, but I won’t be surprised if they walk away victorious. Chelsea 14, Tuscaloosa County 27

Possibly the most under-the-radar game this week, the Calera Eagles will travel to Benjamin Russell for a battle of 2-0 teams in a region opener. The Eagles fell 14-10 to Spain Park in the opener after a last-minute touchdown from the Jags, while they came back a week later and beat Chelsea 10-6 with a late touchdown and last-second goal-line stand. They’ll be hoping for a less thrilling game this week, but they’ve shown they can perform in the final two minutes of games, and this defense is special this season. Benjamin Russell is 2-0 with a 41-7 win against Sylacauga and 33-14 win against Central Clay County. That shows impressive defense by them, while the offense has started strong. Last year, Calera won this game 41-17. This season, the offense isn’t quite that good yet, but the defense is better. Expect that to make the difference in what should be a tight and low-scoring battle. Calera 20, Benjamin Russell 14

I believe last week was a turning point for Briarwood. The Lions flipped a switch offensively in the second half and looked like a team led by a 5-star quarterback. It led to a last-second 23-21 victory against Spain Park, as Briarwood turned a new leaf offensively. This week, the Lions will get an improved Chilton County team with a 30-24 win against Bibb County and a 50-0 victory against Jemison. Briarwood, however, took big steps from its week-one loss to Clay-Chalkville last week, and I expect that to continue this week. Briarwood 35, Chilton County 17

Off to a 2-0 start, this has suddenly become an even bigger game for Shelby County. This game, while early in the season, could be the difference in a top-two seed in the region this season. The Wildcats have been nothing short of tremendous the first two weeks of the season with a 14-7 win against West Blocton and a 21-6 victory against rival Montevallo. The offense is young and hasn’t put up a ton of points yet, but they have progressed in just those two weeks. Now, Holtville comes to town with a 58-8 victory against Fultondale and a 35-29 loss to 7A Alma Bryant. Shelby County’s offense may have to produce more in this one to match Holtville, but I tend to lean toward the Wildcats’ defense getting the job done once again. Shelby County 27, Holtville 24

Montevallo just couldn’t find an offensive rhythm in game one against rival Shelby County. The Bulldogs entered the season needing to replace a lot of production at quarterback and running back, and that showed in the 21-6 loss a week ago. Now, however, they have a game behind them to look at and help fix mistakes. That should help a ton this week as the Bulldogs go up against 1-1 Hale County, who has lost 35-0 to Northside and won 32-16 against Greensboro. Not only do I think Montevallo will make major adjustments offensively this week, but I think the defense will play even better than it did a week ago. Montevallo 34, Hale County 23

It has been smooth sailing for the Vincent Yellow Jackets the first two weeks, and now, it’s time to capitalize on the confidence they’ve built in this region opener. The Yellow Jackets have shown what they are capable of with the returning talent they have, but the run game has been an added bonus early in the season. Sitting at 2-0 with wins of 41-26 and 56-0, they now get a 1-1 Central Coosa team that has a 36-8 loss and 12-point win on the resume so far. This offense has been impressive so far this season, and I don’t see that unit being slowed down this week. If the defense can play like it has the past six quarters, the Jackets should be sitting at 3-0 Friday night. Vincent 42, Central Coosa 27

Early in the season, Coosa Valley’s offense has struggled en route to a 0-2 start. The Rebels fell 21-0 in the opener and 16-6 to Cornerstone last week. The defense, like last year, has been spot on so far, but the offense needs to take a step forward. Now, they’ll hit the road to Lowndes who beat them 47-0 a season ago and has just a 19-14 loss to No. 4 Macon East. I think Coosa Valley’s defense keeps the Rebels within striking distance this year, but the offense will have to improve for a chance to win. Coosa Valley 12, Lowndes 35

The start to the 2022 season has been nothing but dominant for the 3-0 Evangel Lightning. They have won games by finals of 65-13, 55-0 and 48-0. Now with back-to-back shutouts, they’ll be taking on a Southern Prep team that has lost 50-7 and 40-0 in its first two games. Clearly, those offensive struggles don’t bode well going up against an Evangel team that has given up a combined 13 points in three games. Pair that with an offense that should easily be able to put points on the board, and it should be another big win for the Lightning. Evangel 49, Southern Prep 13