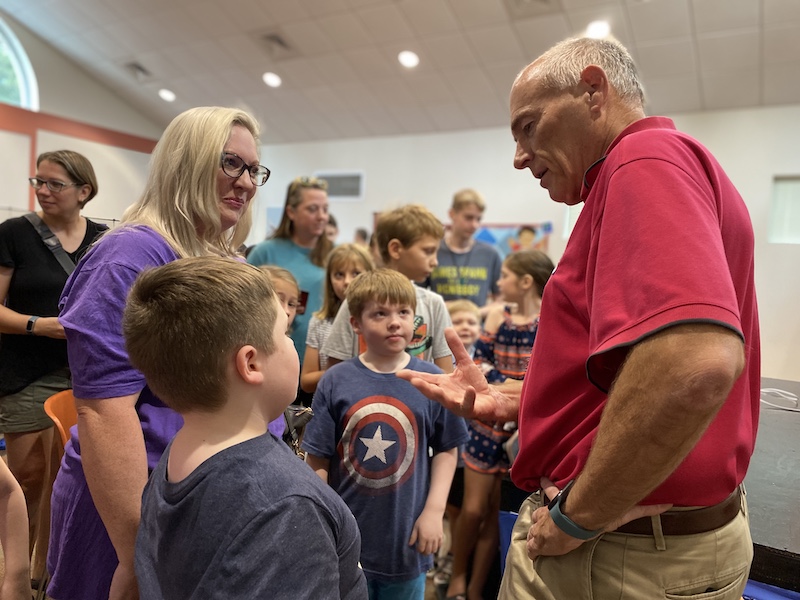 ALABASTER – The program room of the Albert L. Scott Public Library was full on Monday, Aug. 29, as families with homeschooled children anxiously anticipated a special guest. Local ABC 33/40 Chief Meteorologist James Spann was visiting the library to teach the children present a little something about the subject he knows best: meteorology.

“I’ve been looking forward to this for two months,” a sixth grader told Spann after handing him a handmade card.

There were several children present ranging from grades kindergarten to middle school level that had the same sentiment, and Spann happily spoke with each of them.

Spann’s visit was the first in the year-long series of programs the Alabaster library holds for children enrolled in the homeschool program. According to Frances Smith, the Youth Services Librarian, Spann has been presenting the program since 2016, though this was his first year as the premiere program in the lineup.

“The kids, a lot of them are so into science, and the weather is all around us, and he’s somebody that they see on T.V., so that’s three things that will pull them in,” Smith said.

Spann opened the program with an explanation of the various tools used to measure weather before heading to heavier topics like how to pinpoint a tornado and the importance of safety during severe storms. Spann even shared the story of how his own home sustained damage during a tornado and how his wife was saved by taking necessary safety precautions.

Through the duration of the hour-long program, Spann kept the children engaged, made them laugh and made sure to validate every eager child who wanted to answer a question. Afterwards, he took photos with the children and took a video of everyone present so he could show it on the news. 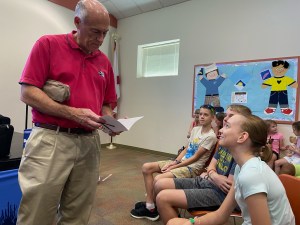 Spann reflected on his own first grade teacher, who he joked with the kids wasn’t as friendly as today’s teachers, but he credited her with his love of meteorology by simply giving him a book on the subject.

“I would look out the window and stare out at the sky, I wouldn’t even know what she was talking about, but she smiled at me one day and gave me that book, and it changed my life,” he said. “She taught me my passion in first grade. I’ll always be thankful for that.”

Spann added that type of encouragement is vital to children’s success.

“Some of these kids, they need encouragement, and now the resources they’ve got – I didn’t have these resources when I was going up, and they can learn so much before they even get to college,” he said. “I’m very optimistic to see the next generation coming up, because they’ll be good. I’m very encouraged about the future generation.”